Democrat John Fetterman is hanging on to a six percentage-point lead over Republican Mehmet Oz in the nation's most closely watched Senate race, a new USA TODAY/Suffolk University poll of Pennsylvania finds, stoking Democratic hopes of keeping control of the Senate in the midterms.

The Pennsylvania contest is believed to be the best shot Democrats have to pick up a Senate seat now held by a Republican. A victory in the Keystone State would mean an endangered Democratic incumbent elsewhere could lose re-election and not cost the party the 50-50 split that now gives it control.

Fetterman, the state's lieutenant governor, was backed by 46% of those surveyed. Oz, a celebrity doctor endorsed by former president Donald Trump, was backed by 40%. That's closer than the nine-point lead, 46%-37%, that Fetterman held in the USA TODAY/Suffolk survey taken in June. In the contest for governor, Democrat Josh Shapiro, the state attorney general, is pulling away from Republican Doug Mastriano, 48%-37%, an 11-point margin outside the poll's margin of error. Mastriano, a state senator and retired Army colonel, also is supported by Trump, who visited the state to rally for both Republican candidates.

The survey of 500 likely midterm voters in Pennsylvania, taken by landline and cell phone Sept. 27-30, has an error margin of plus or minus 4.4 points.

Economy and abortion the driving issues

The most important issues driving Pennsylvania voters' decisions are the economy and inflation, chosen by 44%, and abortion rights, chosen by 25%.

Ten percent cited gun control, and the poll found majority support for proposed state laws requiring universal background checks for firearm purchases, backed by 63%, and for banning the sale of assault-style weapons to those younger than 21, backed by 51%.

The state has been the site of several mass shootings, including an attack on the Tree of Life Synagogue in Pittsburgh in 2018 that killed 11. It was the deadliest attack on the Jewish community in U.S. history.

In the final stretch, the sole Senate debate

In the home stretch of the campaign, Fetterman and Oz are slated to meet in their only debate on Oct. 25 in Harrisburg. A compelling or a disastrous performance by either could well affect the election's final trajectory. Fetterman is likely to face special scrutiny as he deals with concerns about his recovery from a stroke in May.

The stroke forced Fetterman off the campaign trail for a time, and he still sometimes stumbles in speaking. Since Labor Day, Republicans also have outspent Democrats on TV ads in the race, hammering Fetterman as soft on crime and too liberal for the state.

That's only a bit better than his 22-point negative gap in June. 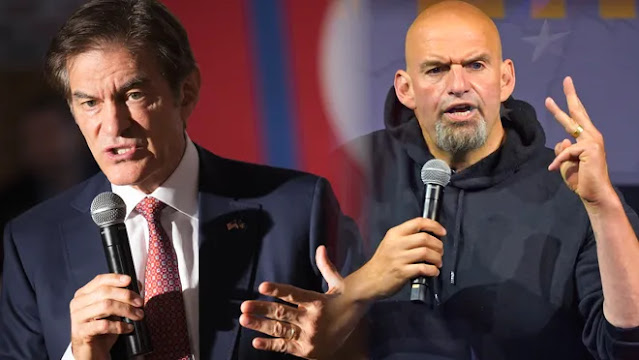 “If you can’t get people to like you, get them to dislike your opponent,” said David Paleologos, director of the Suffolk Political Research Center. “This is a textbook strategy of Oz driving up his opponent’s unfavorability to make the race closer.”

In the governor's race, Mastriano is struggling. His favorable-unfavorable rating is upside down by double digits, 31%-47%. That's the reverse of Shapiro's rating of 46%-31%.

Mastriano, who marched on the Capitol in the Jan. 6 attack fueled by Trump, has faced a new controversy in recent days over a statement he made in 2019 that women who had abortions after the tenth week of pregnancy should be charged with murder.