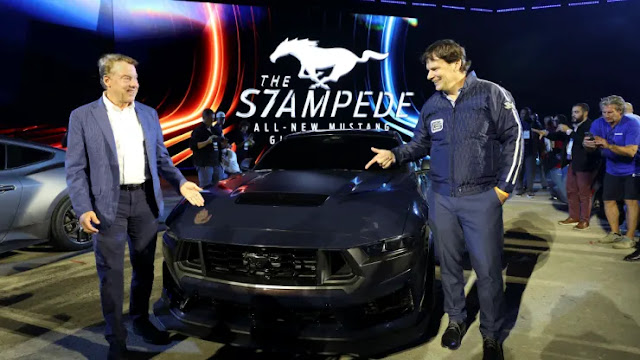 There was no talk of electric vehicles or sustainability during the unveiling for the Detroit auto show. Just revving engines and the screeching of tires, to the applause of hundreds of Mustang owners in attendance.

The scene unfolded in stark contrast to other recent events for Farley and Ford, which have touted electrification and green goals. That’s because despite the EV transition, Mustang is sticking with gas-powered engines for the seventh-generation vehicle in 2024.

That may come as a surprise, given Ford’s plans to invest $50 billion in new electric vehicles in the years ahead, as well as expected plans for the Dodge Challenger and Chevrolet Camaro — the Mustang’s largest rivals — to go electric.

So why did Ford stick with gas engines for the new vehicle? Farley said, essentially, because it could … and because it makes good business sense for the foreseeable future.

The Ford Mustang could be in a segment all by itself in the coming years, forcing those who still thirst for an American coupe muscle car to come to the brand. That includes non-U.S. customers, who represent about 20% of Mustang’s sales.

“People are leaving the segment, like Dodge, so we have a chance to really present something new about Mustang,” Farley said following the 2024 Mustang debut. “This is going to give us a big advantage because a lot of people still love this kind of car.”

While the American muscle car segment has dwindled from what it once was, there’s still demand for the vehicles, which also can attract attention and new customers for their respective brands.

Farley and Ford Chair Bill Ford declined to say whether the seventh-generation Mustang is expected to be the last gas-powered version of the car.

“If people don’t want them anymore, it’ll go away, but I personally believe people are going to want this vehicle for quite some time,” Ford said, adding “that day will come with a tear in my eye.”

Farley said a big reason Ford is continuing with gas-powered Mustangs is, ironically, the success of the Mustang Mach-E, an all-electric crossover that first went on sale in late 2020 and has actually outsold the gas-powered version during some months.

The Mach-E, which shares little to nothing with the gas-powered Mustang other than a name, has led Ford to become the second bestselling brand of EVs in the country.

That EV success has given the automaker more flexibility to carry forward with gas-powered models, compared with rival automakers who have to chase electric vehicle sales and regulatory emission credits awarded for them.

Carmakers are required to have a certain amount of regulatory credits each year. If a company can’t meet the target, it can buy the credits from other companies, such as Tesla, that have excess credits.

“The Mustang Mach-E, in a way, created, allowed this car to happen,” Farley said. “Competitors are buying credits for emissions, and they can’t come out with this kind of vehicle.”

Dodge has said such emissions regulations are among the reasons it’s ending production of its gas-powered Charger and Challenger at the end of next year. Chevrolet is expected to end production of the gas-powered Chevy Camaro in the coming years as part of General Motors’ plans to exclusively offer EVs by 2035.

A spokesperson for Dodge, a division of Stellantis, said in announcing electric muscle cars, the company is “celebrating the end of an era — and the start of a bright new electrified future.”

A spokesperson for Chevrolet said the company doesn’t comment on future production, but added, “Camaro continues to play an important role in Chevrolet’s performance car lineup and remains a vehicle in high demand which our customers love.”Ford’s largest crosstown rival, GM, which is in the process of sunsetting its gas-powered products, is aiming to better compete against Tesla, the EV sales leader.

Farley, meanwhile, said he wants to grow its traditional business through “opiniated products” that draw debate and attention like the 2024 Mustang, including the new “Dark Horse” variant.

“I had a shirt at the dealer show that said ‘Ford vs. Everyone.’ That’s kind of our attitude,” Farley said. “We want to be a dark horse. We’re a dark horse against Tesla in the EV business. We want to bring a new game.”