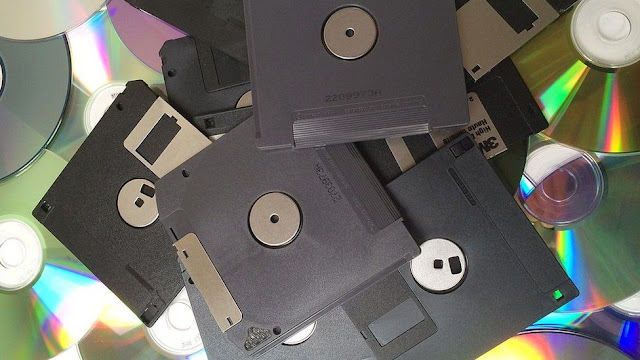 Japan's digital minister has "declared war" on floppy disks and other retro tech used by the country's bureaucrats.

Around 1,900 government procedures still require businesses to use the storage devices, plus CDs and mini-discs, Taro Kono said.

He said regulations would be updated to allow people to use online services.

Despite its reputation for innovative high-tech gadgetry, Japan is notorious for clinging to outmoded technology through its office culture.

Floppy disks - so-called because the original products were bendable - were created in the late 1960s, but were falling out of fashion three decades later thanks to more efficient storage solutions.

More than 20,000 typical disks would be needed to replicate an average memory stick storing 32GB of information.

But the legacy of the square-shaped device can still be witnessed to this day, as their visual appearance inspired the traditional "save" icon.

A Japanese government committee has discovered about 1,900 areas in which businesses are required to use storage media like floppy disks when making applications or holding data.

During a news conference on Tuesday, Mr Kono also criticised the country's lingering use of other outdated technology.

"I'm looking to get rid of the fax machine, and I still plan to do that," he said.

Turning to storage devices, he asked: "Where does one even buy a floppy disk these days?"

This is not the first time Japan has hit the headlines for its old-fashioned habits - which remain a paradox given the country's proficiency at developing exciting new products.

Various explanations have been offered, including poor digital literacy and a bureaucratic culture with conservative attitudes.

There was shock when the country's cyber-security minister admitted in 2018 that he had never used a computer, saying he had always delegated IT tasks to his staff.

And it was not until 2019 that Japan's final pager provider closed its service, with the final private subscriber explaining that it was the preferred method of communication for his elderly mother.

Officials in the US were also discovered to still be using floppy disks to manage their nuclear weapons force during the 2010s - though this practice was reportedly scrapped by the end of the decade.