CAFE NOIR: LIVING IN A BUBBLE 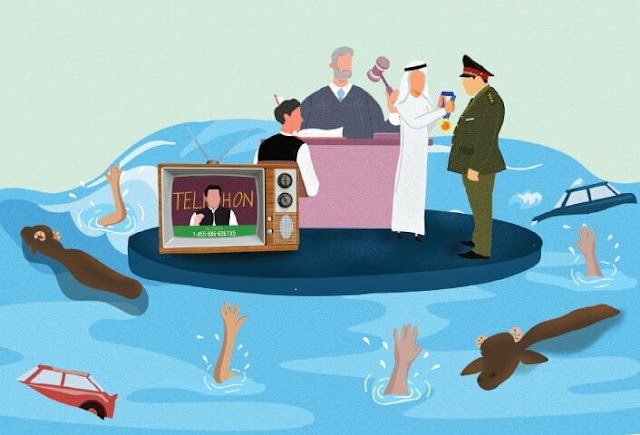 As the country is ravaged by the worst flooding since 2010, with one third of our land buried under water, millions of lives displaced and over a thousand lost, it was heartening to see political differences being set aside and all state institutions working to provide rescue and relief for the flood victims. At least it would have been heartening had it actually happened.

To start off with the muddled priorities, Gen Bajwa — in his capacity as both finance and foreign minister — visited the UK, Saudi Arabia and the UAE, where he was awarded a gold necklace to go with the decorative badges on his chest; he also planned a visit to the US at the same time as Imran Khan’s spokesperson Shahbaz Gill was allegedly being tortured in custody over a sedition case for criticising the army leadership.

Khan, for his part — and he always loves having his part — also threatened a district court judge, leading to the Islamabad High Court announcing its intention to indict Khan in a contempt of court case, calling his formal reply to the charges ‘unsatisfactory’. That is exactly what the National Assembly had to say five months ago too.

Legal experts say apologising to the court is the only way out for Imran. But apologising for things he has said during his life numbers far less than the corruption cases he has lately been involved in.

During the hearing, his nephew and lawyer Hassan Niazi sat beside him in court, so no hospitals were attacked that Friday. The court didn’t let Imran Khan speak a single word during the three-hour proceeding, and commentators were hopeful the court would extend this rule for his endlessly long speeches as well.

But it’s not just the courts keeping Khan busy. On September 7, Khan held another Haqeeqi Azadi March — after the prequel that was his simple Azadi March, and now pending a sequel that will be the Asli, Yaqeeni, Qasm Uthwa Lein Azadi March — in which he vowed to bring down the ‘imported government’ in Islamabad.

Prime Minister Shehbaz Sharif denied this accusation, saying that, with an exchange rate we can’t get a handle on, it’s not possible to import a government. “We can’t even import my favourite safari suits,” he said. “In fact we are thinking of exporting our government to raise foreign reserves.”

Sharif, who was willing to sell the clothes off his back to buy the cheapest wheat for the people of Pakistan in May, might now want to keep hold of them, as he and his son Hamza have a money laundering case hearing on the 17th of September.

Khan said he would never sit down and talk about a political compromise with these thieves — he would prefer standing. He also said a Mr X and Mr Y were conspiring against him and his party in Punjab, during the by-elections and even now. While those two were not available to comment, Mr Z told us he felt sad that he was left out and Mr V said he does not live in Punjab, in fact he doesn’t even know where Punjab is, and for us to never call him again.

As the political squabbling goes on and on, senior Pakistan Muslim League-Nawaz (PML-N) member Khawaja Asif condemned Imran Khan for maligning state institutions and the establishment. “It is the PML-N’s job to do that,” he said, referring to their many remarks against the judiciary and the army in the past, and their own turn on the sedition and treason bingo a few years ago.

“If there is one thing we’ve learned from Pakistan’s history, it is that regimes should be changed regularly, like pants,” he concluded. The prime minister’s seat in Pakistan is the longest running game of musical chairs in history.

Flood relief campaigns are underway by a struggling government, and by NGOs, international donors and through many citizen initiatives, but the money coming in is just not enough to cover the damage wreaked by climate change-induced monsoons and the glaciers melting more every summer because of global warming. The First World has offered its deepest sympathies but no reparations for causing all of that. They promise to burn less fossil fuel, once it runs out, however.

“We’ve been looking into climate change for a while, we had the Kyoto Protocol, we have the Paris Agreement, next we’re looking for a meaningless accord in a country in the Global South, to express our solidarity that we are all in this together. The continual running of our industries that is.”

In other news, the person who inherited the remains of an empire built on extractive colonialism — the latter playing a significant role in our climate catastrophe — the Queen of England, a tax-hogging, government-interfering monarch, just died at the age of 96. It led to a significant amount of memes and jokes from the former colonies, such as of her son spending a lifetime of unemployment waiting for her to pass away and getting his first job past retirement age. But some people find these jokes distasteful and ‘too soon’ (Prince Charles definitely didn’t think it was too soon).