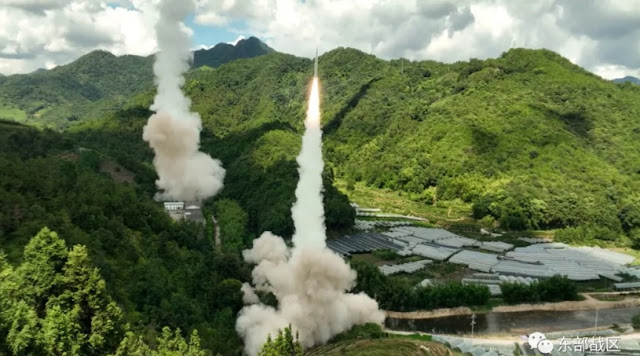 The US government has called the launch of missiles aimed at Taiwan irresponsible. She is postponing her own missile test to avoid further escalation.

The US government has accused China of overreacting and unnecessary escalation after the visit of the American top politician Nancy Pelosi to Taiwan. China has launched an estimated 11 ballistic missiles toward Taiwan , National Security Council communications director John Kirby said in Washington. "We condemn these actions."

The actions of the government in Beijing are irresponsible. China used Pelosi's visit "as an excuse to step up its provocative military activities in and around the Taiwan Strait." China's "provocative actions" are a "significant escalation".

Taiwan's President Tsai Ing-Wen also criticized the Chinese maneuvers as irresponsible . At the same time, Tsai emphasized that her government did not want to escalate tensions. The aim is to preserve the status quo. In the conflict over Taiwan, China launched the largest demonstration of military power in decades. According to Chinese information, rockets for "precision strikes" were also fired. The military operations are intended to deter Taiwan from further efforts for independence. At the same time, they are to be understood as a warning to the USA to stay out of the dispute.

China's People's Liberation Army ordered the maneuvers in response to US House Speaker Nancy Pelosi's trip to Taiwan on Tuesday and Wednesday. Pelosi's trip to Taiwan was the highest-ranking US visit to the island in a quarter-century. China sees Taiwan as part of the People's Republic and wants to reunite the island with the mainland - if necessary with military force. The government in Beijing had vehemently warned against Pelosi's visit. This was primarily of symbolic importance: the USA – like the EU – follow the so-called one-China policy and maintain no official diplomatic relations with Taiwan.

Kirby said the US government has predicted such a move and expects further responses from China. One expects further military exercises and aggressive rhetoric. For its part, the United States was not aiming for a crisis. It is also not in the interests of Taiwan and the region that tensions continue to escalate. The United States therefore decided to postpone a missile test of an ICBM originally planned for this week. At the same time, Kirby emphasized that the United States was prepared for all conceivable Chinese actions.

Total blockade of Taiwan: by air, land and sea; to the north, south, east and west. The island woke up this Thursday surrounded by advanced Chinese artillery. The war games have begun. And they are broadcast live on television. J-20 fighters, the H-6K bomber, the J-11 fighter jet, the Type 052D destroyer, the Type 056A corvette, DF-17 hypersonic missiles, and DF-11 short-range ballistic missiles. More than a dozen of the latter were released Thursday afternoon in the waters off northeastern and southwestern Taiwan. But there were five that fell within Japan's exclusive economic zone (EEZ), which extends 370 kilometers from its coast, as Japanese Defense Minister Nobuo Kishi denounced. "This is a serious problem that concerns the national security of our country and the safety of people," Kishi said.

According to the Japanese ministry, four of those five ballistic missiles, which fell in waters near the Okinawa archipelago, "would have flown over the island of Taiwan" . Following the incident, Tokyo lodged a diplomatic protest with Beijing. In addition, Taiwan reported that 22 Chinese planes had breached its air defense zone. Its air defense systems located the planes at the moment they violated its borders. In China there are some televisions and newspapers that say that "operation reunification" has already started . Or at least the rehearsal of the military exercises to invade Taiwan. For now they are only war drills, the largest in the history of the waters that surround the island.

That term, that of "operation reunification", has also been embraced by many users of Weibo, the Chinese brother of Twitter, in full patriotic fervor after Nancy Pelosi 's lightning passage through the autonomous island that China considers a separatist province that must be put under mainland control, by force if necessary. Pelosi's visit has been taking up more than half of Weibo's 50 trends for two days. The platform even collapsed on Wednesday due to excessive traffic and messages, many of them from users who cheered the Chinese army to fulfill their long-standing desire to attack Taiwan. "The anger of the people stimulated the strong desire to speed up the process. What happened during these two days will surely speed up China's pace in achieving the reunification of the motherland," said Zhang Yiwu, a professor at Peking University.

Less than 24 hours was the president of the House of Representatives of the United States in Taiwan. Enough time to cause an international earthquake and push the new Cold War starring the two world superpowers to the limit, but with the autonomous island in the middle of the crossfire, for now more dialectical and simulated. Taiwan is currently blocked by the military maneuvers of the People's Liberation Army (PLA). Combat simulations using live fire, with sea assault, ground and air combat training, have begun and were initially to last until Sunday, but some Chinese military officials have hinted that the drills will last until Monday. Many of the exercises are being carried out within Taiwan's territorial waters.

Last morning, hours after Pelosi continued her Asian tour to South Korea, Chinese drones flew over the area of ​​the Taipei-controlled Kinmen Islands, which are just 20 kilometers from the Chinese coast. "This action is a solemn deterrent against the recent great escalation of negative actions by the United States on the Taiwan issue, and a serious warning to Taiwanese forces seeking independence," said Colonel Shi Yi, spokesman for the Command. of the PLA's Eastern Theater, the section of the Chinese military that oversees the Taiwan Strait.

Chinese military commanders on Wednesday demarcated six no-entry zones around the island for civilian ships and aircraft, warning that it could conduct "major military exercises with live-fire shooting." Airlines operating in South Asia are urged to avoid flying near Taiwan during the exercises, and the island's authorities have canceled 66 international flights. It has been more than two decades since Beijing has flexed military muscle around Taiwan in such a way. We have to go back to the last crisis in the strait, in 1996, to find the last precedent of seeing the Chinese navy carrying out missile tests in the area, with the big difference that the capacity of the Chinese army has multiplied, with aircraft carriers they don't have in the 90's.

"The exercises are unprecedented as PLA conventional missiles are expected to fly over the island of Taiwan for the first time. PLA forces will enter an area within 12 nautical miles of the island and the so-called median line will cease to exist." read a note published by the Global Times, one of the loudest English-edited loudspeakers controlled by the ruling Chinese Communist Party (CCP). "This is the first time that the military will launch long-range live artillery across the Taiwan Strait, in a move that will demonstrate the PLA's strong will and strong ability to safeguard national sovereignty and territorial integrity, and thwart attempts Taiwan independence secessionists and interfering external forces," Zhang Junshe, senior researcher at the Chinese Army's Naval Research Academy, also writes in the Global Times.

According to the South China Morning Post, the Chinese army said it would have carried out precision attacks on the strait on Thursday afternoon. The Hong Kong-based newspaper also reports that the United States and Taiwan have stepped up their deployment to the area, with a US Navy P-8A maritime patrol aircraft and a US MH-60R anti-submarine helicopter entering southwestern Taiwan. The Taiwanese air force would have Mirage 2000 and F-5 fighter planes to monitor the maneuvers of the Chinese army. From Taiwan, officials on the island have said China's drills" violate United Nations rules, invade its territorial space and are a direct challenge to free air and sea navigation." China is holding drills on the busiest international waterways and aviation routes and that is "irresponsible and illegitimate behavior," a Taiwanese government spokesman said.

At the international level, Russia has been the only country that has defended China's "sovereign right to hold major military exercises in Taiwan. " A Kremlin spokesman accused the United States of artificially fueling tensions in the region. The European Union and G7 foreign ministers have called on China not to use Pelosi's visit as a pretext for "military action against Taiwan." That same demand comes from the United States, which, like most countries, does not recognize Taiwan's sovereignty, but opposes any attempt to change the island's status quo by force.

Officially, Washington maintains a one-China policy, but Beijing doesn't buy it . In the Asian giant they are convinced that Washington intends to put an end to its traditional ambiguous position, under which it maintains informal relations with Taiwan and would give it military support in the event of an invasion, while recognizing the position that there is only one government Chinese in all Mandarin-speaking territory. Foreign Minister Wang Yi has already accused Washington of pursuing a "bogus" one-China policy in a conversation with US Secretary of State Antony Blinken. Last week, during the last talk between Presidents Joe Biden and Xi Jinping , the Chinese leader warned his American counterpart that "those who play with fire will perish," referring to Washington's actions in Taiwan.

After Pelosi's departure from the island, Minister Wang picked up that "play with fire" to warn US politicians that they will "become enemies of 1.4 billion Chinese", a situation that "will not have a good ending". In Southeast Asia, the foreign ministers of ASEAN, an organization formed by the states of the region, have charged against "provocative actions" in Taiwan. "The situation could lead to miscalculation, serious confrontation, open conflicts and unpredictable consequences among major powers," they said in a statement issued during a group summit in Cambodia. There is Chinese Minister Wang Yi, who was absent from a meeting with his Japanese counterpart, which was interpreted as a protest against the G-7's criticism of China's military maneuvers.

In addition to the military blockade, Beijing is also seeking a commercial lock on the island. A new package of economic sanctions is expected today after China - which is Taiwan's biggest trading partner with $328.3 billion in bilateral trade last year - imposed restrictions on Taiwanese agricultural products and sand imports on Wednesday. To try to understand how far the new crisis in the Taiwan Strait will go, read analyzes by experts on the ground such as Michael Schuman 's in The Atlantic:

"Pelosi's trip is likely to be the beginning, not the end, of a crisis in US-China relations. Beijing could drag out its response for weeks, even months, with unforeseen consequences," writes Schuman, an American writer who He has been living between China and Southeast Asia for nearly three decades and is the author of 'Superpower Interrupted', his latest published book on China. "Taiwan sits squarely on the dividing line between these two competing powers and their agendas. For the United States, Taiwan is not only an old friend, but also a crucial economic partner and link in the web of democracies that sustains American power in the world." the Pacific. For China, Taiwan is a wandering province that remains an integral part of the country, as well as an indispensable component of the country's rise to superpower status," Schuman said.

There is no magic wand to decipher the outcome of this new crisis in which China, after looking helplessly at Pelosi's provocation, is now making a move by venting its anger with military exercises around Taiwan.