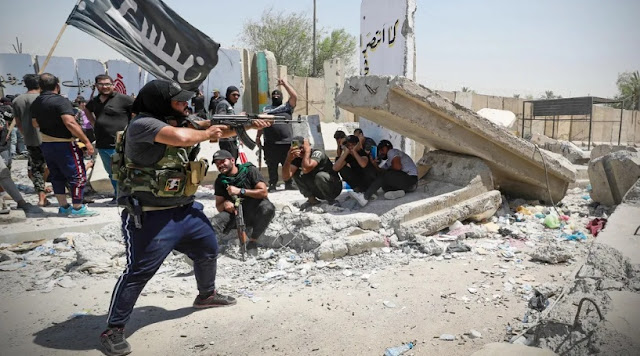 After riots in Iraq, the Shiite preacher Muqtada al-Sadr called on his followers to withdraw. A nationwide curfew was lifted.

After two days of violent protests that left more than 37 dead, the first supporters of Iraqi Shiite leader Moqtada al-Sadr left the government district in Baghdad. In a speech at his headquarters, al-Sadr had previously urged his supporters to evacuate the so-called Green Zone in the center within 60 minutes.

If they don't do this, he himself will withdraw from his own movement, al-Sadr said in a televised address. He apologized to the Iraqi people. He had hoped for peaceful protests.

The unrest in Iraq broke out after al-Sadr's announcement that he intends to withdraw from politics. He accused rivals of having ignored calls for reforms. His followers then took up arms. Several people were killed in the riots on Monday.

In the heavily secured Green Zone, militias from both sides fought each other. According to the Iraqi security forces, four rockets hit the area where the US embassy is located. Al-Sadr's supporters had besieged parliament in recent weeks. On Monday they stormed the government palace housing Prime Minister Mustafa al-Kasimi's office. After al-Sadr's appeal to withdraw, the security forces lifted a nationwide curfew, state media reported.

Al-Sadr's movement emerged as the strongest force in last October's parliamentary elections. However, he failed to form a government. He refused to cooperate with the pro-Iranian parties. That is why al-Sadr called for the dissolution of parliament and new elections, which his opponents reject. At the same time, the preacher relied on the pressure of the street. Iraqi Shiite leader Muqtada al-Sadr, a key figure in the country's public life, announced on Monday his "definitive withdrawal" from politics, at a time when Iraq is plunged into a serious crisis.

"I had decided not to get involved in political issues. Therefore, I now announce my definitive withdrawal," Muqtada al-Sadr wrote on Twitter at a time of total political stalemate in Iraq, where there is a struggle in the Shiite forces to appoint the next prime minister, after the elections in October 2021. Iraq remains without a prime minister or government, as Shiite forces cannot agree on how to appoint him. Al-Sadr, very influential in Iraq, demanded the dissolution of Parliament and early legislative elections to break the impasse.

Following the announcement, groups of al-Sadr supporters stormed the Presidential Palace in Baghdad and tried to cross the concrete barriers installed at its entrances. These have taken the official residence and have walked through the different rooms and have even bathed in its pool. A source from the Iraqi Joint Operations Command has confirmed that "the demonstrators entered the Presidential Palace", in the fortified "Green Zone", where the headquarters of the Government and other political institutions of the country are located. Shortly after, the Iraqi Joint Operations Command decreed a curfew that was lifted this morning.

The authorities had already warned that they would act forcefully in the face of any attack against government institutions, diplomatic missions of foreign nations or private property. Medical sources have confirmed that at least 35 protesters have died and more than 250 have been injured. Faced with the unleashed chaos, the Iraqi president, Barham Saleh, has met with the acting prime minister, Mustafá al-Kazemi, and with the leaders of Parliament and the Judiciary to address the situation. Furthermore, Al-Kazemi has asked al-Sadr to order his supporters to return home to contain the crisis.

Muqtada al-Sadr has announced that he has started a hunger strike "until the violence ceases" in Iraq, one of his spokesmen has reported. "His Eminence announces a hunger strike until the violence and the use of weapons cease. Because kicking out the corrupt does not give anyone, whoever they are, a justification for the use of violence," he said in a brief statement. on his Facebook page one of the leaders of the Sadrist Movement, Hasan al Azari. A source from the Baghdad Operations Command has told on condition of anonymity that there are clashes with machine guns and RPG-7 anti-tank rocket launchers near the Green Zone between the security forces and the Saraya al Salam militia (Peace Brigades) of Al-Sadr.

For its part, the United Nations mission in the country has described the current escalation as "extremely dangerous" and urged the protesters to "cooperate with the security forces and avoid actions that could lead to an unstoppable chain of events," according to a release. Following a day of clashes in Baghdad, Iraqi security forces announced Tuesday the lifting of the curfew imposed across Iraq, just minutes after influential Shiite cleric Muqtada al-Sadr called on his supporters to withdraw from Baghdad's fortified Green Zone.

"YOU BRING THE POLITICAL FORCES CLOSER TO THE PEOPLE"

Al-Sadr, whose movement won the October elections with 73 of the 329 seats in the Legislature, affirmed that with his political activity "he only wanted to repair the deformation that, for the most part, was caused by the Shia political forces, the majority being the country. I wanted to bring them closer to the people so that they feel their suffering". In the past, al-Sadr has opted more for the political path and has led the main Shiite movements in the country, although without holding an official position.

Sadrism maintains a division between the clergy and the rulers, and that has been the option chosen by Muqtada. The political coalitions sponsored by him, Al Ahrar in 2014 and Sairun in 2018, won a large part of the seats in the Legislature, thus giving the cleric the possibility of choosing the Government of Iraq without participating in it directly.

The success of those coalitions has also allowed him to influence some ministries. What distinguishes al-Sadr from other Shiite parties and militias is his disassociation from him from Tehran, which has wielded increasing influence in Iraq in recent years. The clergyman advocates for his country's sovereignty, patriotism and independence despite his ties to the neighbor.