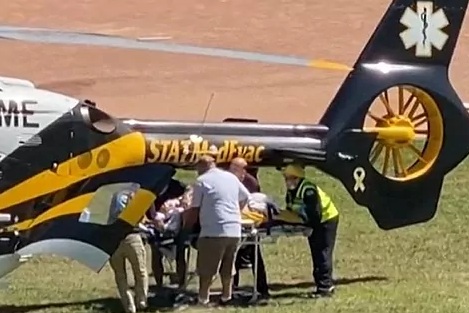 The savage aggression was possible thanks to the fact that the Chautauqua Institution, which was organizing the event, rejected the police suggestion to put metal detector arches.

Salman Rushdie has regained his voice and is able to breathe without help. The British-American writer is, thus, "on the road to recovery", as confirmed by his agent, Andrew Wylie, to the newspaper 'New York Times'.

What is showing extraordinary health are the sales of his book 'The Satanic Verses', for which he was sentenced to death by Iran in 1989 due to the alleged "blasphemous" nature of the work. The novel was last night in the 11th position of best-selling books in the Amazon online store, where it occupied the first position in the field of contemporary fiction. Rushdie's other thirteen fiction books were also climbing the bestseller lists, although without reaching the level of the work for which, perhaps, the writer was about to pay with his life.

But Rushdie will take time to fully recover, if he ever does. "He will take time; the injuries have been serious," Wylie wrote in his email to the New York Times. Apparently, the novelist received ten stab wounds from Hadi Matar, a 24-year-old American descendant of Lebanese immigrants and, according to the media in that country, with an extensive history of supporting radical movements of Shiism, the version of Islam, on social networks. which dominates in Iran.

Matar appeared on Saturday afternoon, local time, in a courthouse in Chautauqua County, where the assassination attempt took place, located 500 kilometers from New York City and 160 from Toronto, Canada's largest city. The Prosecutor's Office accuses Rushdie of attempted second-degree murder, a penalty for which he could be sentenced to several decades in prison. The assailant pleaded not guilty.

The US authorities have not released any information about the possible motivation for the crime. But suspicions point to the action of another Muslim fanatic. Matar is a declared supporter of the Revolutionary Guard of Iran, which is the most ideological and fundamentalist military force in that country, and everything indicates that he acted with premeditation. Rushdie's attacker traveled the 300 miles from Bergen County, outside New York City, to Chautauqua by bus. Once in that town, he bought a ticket to attend the conversation between Rushdie and Henry Reese, the founder of City of Asylum in Pittsburgh, an organization that gives refuge to persecuted artists and intellectuals around the world.

As the two had just sat down on the dais, just before the conversation began, Matar jumped out of the audience, knocked Reese to the side, and repeatedly stabbed the 75-year-old Rushdie until they separated him. The novelist literally saved his life by sheer miracle.

The savage aggression was possible thanks to the fact that the Chautauqua Institution, which was organizing the event, rejected the police suggestion of putting metal detectors for the public attending the conference, considering them contrary to the spirit of exchange of ideas in which its summer meetings are based, in which it brings together some of the most important people in the world in the fields of culture, art, science and politics. Obviously, it never occurred to anyone that such lofty principles are not applicable to a fanatic such as Matar seems to be.

RUSHDIE LIVED WITHOUT SECURITY FOR 10 YEARS

The trust in the human species of the management of the Chautauqua Institution now threatens to damage the reputation of one of the most prestigious and long-standing summer schools in the United States. It is true that Rushdie has lived with very few security measures for more than a decade, largely by his own decision. And it is also true that the writer, a womanizer of legendary dimensions, drove the British intelligence service agents crazy when, in the worst moments of the Islamist persecution against him, he constantly escaped from his escorts to flirt. But it is no less so that, although the pressure of the fundamentalists had lowered the tone in the last two decades, he was still in danger.

In 2012, the Indian authorities canceled the writer's presence at the Jaipur Literary Festival citing security reasons. Two years earlier, Al Qaeda had put his name on a public target list. And in 2006, the leader of the Lebanese political party and guerrilla Hezbollah, Hassan Nasrallah, lamented that no one had killed the writer, whom he described as "disgusting."

The attacks do not only come from political organizations and armed gangs. When the Queen of England knighted Rushdie in 2007, the Iranian and Pakistani embassies in the UK issued a formal protest. Rushdie, who was born in India to an upper-class Muslim family, is an atheist and ideologically center-left. In 2016, when he had just obtained US citizenship, he voted for Hillary Clinton. He has also been very critical of the Hindu populist nationalism of the country's prime minister, Narendra Modi, and of Donald Trump and 'Brexit'.