Russia-Ukraine Conflict: Situation In Ukraine—Satellite Images Show Immense Damage To The Russian Base 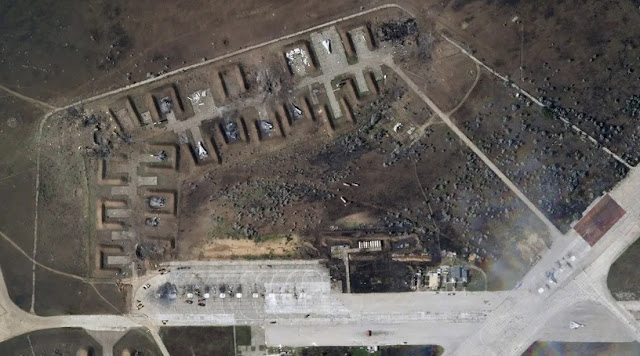 According to the first images, at least eight planes were destroyed in the explosions in Crimea. There were violent fires, only remnants of the planes remain.

After the explosions on the Russian -occupied Crimean peninsula, satellite images were released for the first time, revealing the destruction at the Russian base. Satellite images from the US company Planet Labs show that at least eight aircraft were apparently destroyed. Ukrainian President Volodymyr Zelenskyy had previously spoken in a video address of nine destroyed planes. Russia, on the other hand, said no planes were damaged.

The satellite images show the base before and after the detonations. The picture, said to have been taken before August 9, shows several fighter jets parked at Saky Airfield. The picture, which was taken after August 10th and thus after the explosions, shows the remains of these planes - at least eight of them are apparently destroyed. Other satellite images show that a large part of the base must have burned. An area that is green in the earlier images looks black and charred afterwards.

The cause of the explosions at the airport is still unclear and the information is sometimes contradictory. The satellite images can be taken as the first independent confirmation of the base's destruction. How this place 160 kilometers from the front could be attacked remains open.

So far, there has been no official confirmation of an attack from the Ukrainian side. However, an aide to Ukraine's president said the blasts were either triggered by a long-range Ukrainian weapon or partisans in Crimea. According to US broadcaster CNN, the Russian Air Force suffered the greatest damage since World War II.

At least one person was killed and several injured in the blasts, the peninsula's health ministry said. Crimea was annexed by Russia in 2014.