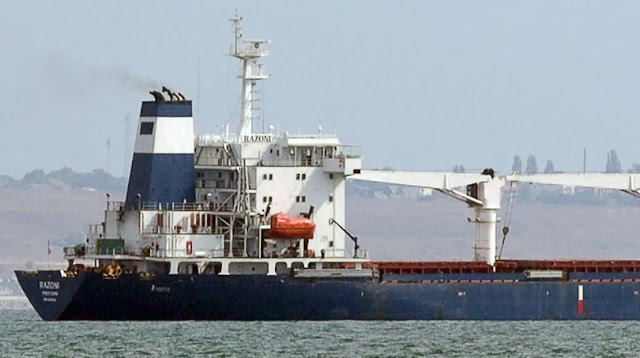 For the first time in several months, a ship with a cargo of corn left Odessa. The "Razoni" is to be checked in Istanbul on the way to Lebanon.

For the first time in several months, a ship carrying Ukrainian grain has left the port of Odessa. The cargo ship Razoni, flying the flag of Sierra Leone, has loaded a shipment of corn and is on its way towards Lebanon, Turkish broadcaster CNN Türk reported, citing the Turkish Defense Ministry.

The freighter left the Ukrainian port at 8:19 a.m. (CEST) and is expected to be inspected in Istanbul this Tuesday. At 2 p.m. CEST he will be off the Bosphorus coast, said Turkish Defense Minister Hulusi Akar. After anchoring, the ship is checked and can then, like the following ships, "move on without any problems". The ministry had previously announced that the grain delivery would take place under the agreement concluded on July 22, with further exports to follow.

The war opponents Ukraine and Russia, mediated by the UN and Turkey, had signed an agreement to allow grain exports from Ukraine from three ports. According to Ukrainian sources, more than 20 million tons of grain from last year's harvest are still waiting to be exported. Just a day after signing the agreement, Russia fired rockets at the port of Odessa.

Controls in Istanbul are intended to prevent arms transports

The coordination center for grain exports provided for in the agreement opened in Istanbul last Wednesday. There, representatives of Ukraine and Russia as well as Turkey and the United Nations will in future jointly monitor the safe passage of Ukrainian cargo ships on the defined routes. The ships are also to be inspected in Istanbul upon arrival and departure to prevent clandestine arms shipments.

"Today, together with partners, Ukraine is taking another step towards preventing world hunger," Ukraine's Infrastructure Minister Oleksandr Kubrakov said on Facebook . The export that has started is also a success for the domestic economy: the Ukraine could earn at least one billion US dollars (around 980 million euros) by reopening three ports. In addition, the export enables planning in the agricultural sector. Kubrakow announced that the ports will reach their full loading capacity in the coming weeks.

Port operations in Odessa were suspended for security reasons after the Russian invasion at the end of February. Ukraine accused Russia of blocking the grain. The UN increasingly fears hunger crises in the world due to the lack of grain deliveries.