Pelosi's Risky Journey: Nancy Pelosi Lands In Taiwan And Brings The 'Cold War' Between China & The US To A Dangerous Level Of Tension 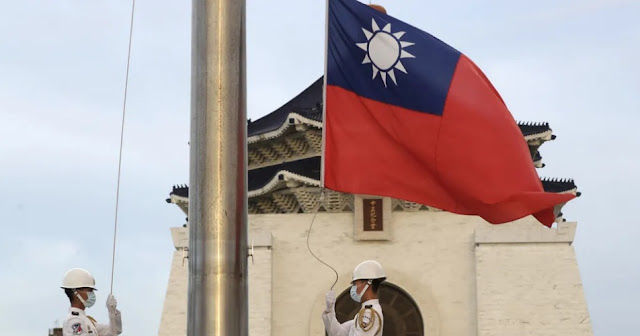 The official agenda of the tour of the president of the US House of Representatives did not include a visit to Taiwan, a gesture that Beijing considers a geopolitical challenge.

Despite strong warnings from China, US House Speaker Nancy Pelosi has arrived in Taiwan for a visit. The top US politician, number three in the United States after the president and his vice president, landed in the capital, Taipei.

It is the highest-ranking US visit in 25 years to democratic Taiwan, which the Chinese leadership sees as a breakaway province of the People's Republic of China, even though it was governed independently before the People's Republic was founded in 1949. Pelosi's predecessor, Newt Gingrich, last visited the country in 1997.

China's head of state and party leader Xi Jinping recently warned US President Joe Biden in a telephone call before the visit: "Those who play with fire will perish." The Chinese foreign ministry spokesman Zhao Lijian had announced serious consequences and "resolute and strong measures" in the event of a visit. The Chinese government would see the move as an encouragement to the leadership in Taipei to make Taiwan's decades-old de facto independence permanent.

China's People's Liberation Army had responded to reports of the upcoming visit with maneuvers, target practice, military aircraft and warships near Taiwan and the closure of sea areas. Chinese warplanes flew over the Taiwan Strait, according to Chinese state television. How many there were and what their destination was not disclosed.

The island between Japan and the Philippines has great strategic importance. US General Douglas MacArthur once described Taiwan as the US ' "unsinkable aircraft carrier" . A conquest by China would be an important building block in its great power ambitions.

China's President Xi, on the other hand, sees it as his "historic" mission to achieve "unification" with Taiwan. The claim to power on the island with around 23 million inhabitants goes back to the founding history of the People's Republic. At the end of the civil war against the communists, the national Chinese Kuomintang government fled with its troops to Taiwan, while the communists proclaimed the People's Republic in 1949.

The Flightradar24 website, which monitors air traffic around the world in real time, has crashed several times this Tuesday. Up to 630,000 users became connected at the same time, refreshing the page over and over again to follow the itinerary of the SPAR19, a United States Air Force plane that took off from Kuala Lumpur in the middle of the afternoon (local time). On board was Nancy Pelosi. The Speaker of the US House of Representatives and her entourage are on a tour of Asia. After visiting Singapore and Malaysia, the official agenda indicated that the route would continue through South Korea and Japan. But Pelosi's plane made a rather unplanned stop in Taiwan.

After many speculations, hypotheses and threats, the "Pelosi soap opera", baptized like this for the last two weeks by the Chinese and American press, has culminated in an ending that neither Washington nor Beijing likes: the second in line of succession to the presidency of the United States -after Kamala Harris- reaching the autonomous island that China considers a separatist province. "Welcome President Pelosi. Thank you Democratic friends for your strong support for Taiwan," was the message that appeared on the Taiwanese night in Taipei 101, the most famous skyscraper in the island's capital.

For Beijing, Pelosi has crossed a red line. Chinese leaders are used to responding with invasion threats whenever Washington officials visit Taiwan. Up to 20 times US congressmen, former senators and second-tier diplomats have traveled to Taiwan since 2018. China's threats usually turned into Chinese fighter raids on the island's air defense zone. But this time it is different.

Pelosi is the highest-ranking American politician to set foot in Taiwan since her Republican predecessor, Newt Gingrich, did so in 1997. Beijing understands the trip as a historic provocation by its biggest rival on the global geopolitical board. In the midst of a new Cold War between the two superpowers, the Asian giant is convinced that Washington is moving in the direction of breaking its traditional ambiguous position, under which it maintains relations with Taiwan while recognizing Beijing's position: only there is a Chinese government in every Mandarin-speaking territory.

"The US will bear the responsibility and pay the price for damaging China's sovereignty and security," said Hua Chunying, a spokesperson for China's Foreign Ministry. Minutes before Pelosi's landing, several Chinese Su-35 fighter jets crossed the median line dividing the Taiwan Strait, causing Taipei's air defense sirens to go off in fear of a possible attack. Since Monday, Chinese warships have also been stationed near the dividing line: one destroyer is 80 kilometers southeast of Taiwan and two others have been sighted nearly 100 kilometers east of the island.

On Tuesday morning, on a beach in Xiamen, in the south of the country, just 20 kilometers from Kinmen, an island ruled by Taiwan, a row of armored amphibious assault tanks roamed the coast to the amazement of bathers. On the other side, at Taipei's Taoyuan airport, they received three bomb threats intended to disrupt Pelosi's landing, and the website of Taiwan's presidential office was cyberattacked by "foreign forces."

The Chinese airline Xiamen Airlines announced interruptions in about thirty flights due to "air traffic controls" in Fujian, the Chinese province that is just across the Taiwan Strait. Chinese maritime authorities announced that they were going to start military exercises in the South China Sea and live-fire drills in the Bohai Sea, near the Korean peninsula. The notice was published as several Chinese warplanes were flying over the median line separating the two territories.

"It is almost certain that China's response will include a military component, most likely with a show of force in the first instance: live-fire exercises, a much larger military presence inside the Taiwan Strait and especially across the median line. including launching missiles. The response will also include economic and diplomatic actions," says Taylor Fravel, a military analyst who is an expert on China. On Tuesday, Beijing announced import bans on more than 100 Taiwanese companies in the food and agriculture industries.

"China's tough response is likely to play out over days or weeks, but it will probably start after Pelosi leaves Taiwan," Fravel continues. "Xi Jinping warned Biden at least twice in separate virtual meetings that he should not 'play with fire with Taiwan.' erosion of American politics," he says. "The tense situation is not expected to escalate into a military conflict or have an impact on President Xi Jinping's plan to secure a third term in power when the ruling Communist Party holds its congress in the fall," the South China editorial says. China Morning Post, based in Hong Kong, one of the most influential newspapers in Asia. Many international analysts share that, in the face of the new crisis in the Taiwan Strait, President Xi, who has repeatedly voiced his intention to "reunify" Taiwan with China, by force if necessary, is faced with a balancing act between respond forcefully to Washington's provocation without unleashing a war that would endanger his re-election at the next party congress.

Beijing is not the only one that has moved chips in the region in recent hours. Pelosi has arrived in Taiwan accompanied by an extensive military deployment. The US military has moved its assets in the region closer to the island , including the aircraft carrier USS Ronald Reagan, which returned to the South China Sea after calling at the port of Singapore last week, the amphibious assault ship USS Tripoli, which is near Okinawa, Japan, and the USS America, also off the Japanese coast. Eight F-15 fighter jets took off from their base in Okinawa on Tuesday to provide protection for Pelosi's flight, which was also escorted by several Taiwanese military planes.

The plan of the president of the Chamber is to meet on Wednesday with the leader of Taiwan, Tsai Ing-wen, of an independence court, who has been in the position of president since 2016 and who has always opposed the old proposal of the neighbor from above : the formula of "one country, two systems", the format that was established in Hong Kong, according to which the island would have significant autonomy if it accepts reunification, although it would be subjected to the yoke of the Chinese regime as has happened in the former colony British.

"We would like to tell the United States that the People's Liberation Army (PLA) will never sit idly by and China will give resolute responses and strong countermeasures to defend its sovereignty and territorial integrity," Zhao Lijian, another government spokesman, warned on Monday. Chinese, who assured that, due to Pelosi's status as the "number 3 official of the United States government, a visit to Taiwan would cause an atrocious political impact".

The EPL, which on Monday organized several events showing muscle to celebrate its 95th anniversary, published a video on Weibo, the Chinese Twitter, where it presented its weapons and simulated combat on land, sea and air, something that many users cheered, interpreting the images as a warning that they would soon attack Taiwan. Comments like those made by Yogjun Xie, a senior Chinese Foreign Ministry official, also helped ignite the war mood, hinting that China was ready to attack at any moment.

Last week, the PLA described Pelosi's trip as a move to support "Taiwan independence" that violated the one-China principle and warned that the military would not "turn a blind eye." The Eastern Theater Command, the section of the Chinese military that oversees the Taiwan Strait, released a video showing a test of its DF-11 short-range ballistic missile, which is believed to be designed to target the island. Prior to Pelosi's arrival in Taiwan, as China intensified military rhetoric, the island's news agency reported that the Taiwanese military had increased its "combat readiness" to react to "enemy threats." Reuters also reported that Taiwan, home to 23 million people, is preparing its bomb shelters over fears of a Chinese attack.

Taiwan has its own constitution, democratically elected rulers, and 300,000 active soldiers in its armed forces . De facto, it functions as a completely independent country and the tentacles of Beijing, which has never controlled the island with the Chinese Communist Party (CCP) at the helm, have no real power within the Taiwanese Executive. The problem with Taiwan is that only 14 nations in the world recognize its sovereignty. And there is no international power on that list, not even the rabble-rousing United States, its great sponsor and largest supplier of weapons, which at the moment of truth avoids formally mentioning a possible independence from Taiwan.

What President Biden has done recently is pledge that the United States will defend Taiwan in the event of an invasion. Although on July 28, during Biden's last conversation with Xi Jinping, the Democrat reiterated to his Chinese counterpart that the United States "has not changed" its position on Taiwan. The island is already preparing to withstand the campaign of military pressure - "unprecedented", Chinese officials warn - that Beijing is preparing in response to Pelosi's visit.