MIDDLE EAST: Truce Between Israel And Islamic Jihad In Worst Escalation Since 2021 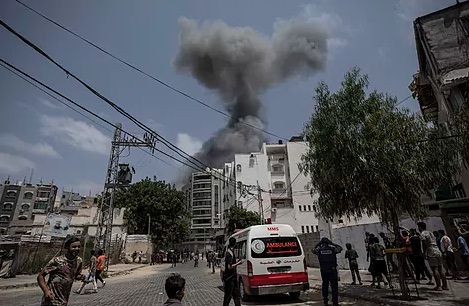 Although the ceasefire may be short-lived, it could end the fighting.

After three days of attacks, Islamic Jihad and Israel began a truce this Sunday at 11:30 p.m. that could end the worst escalation since May 2021. The Israeli government did not take long to accept the ceasefire after beheading the Jihad military leadership in the Gaza Strip while the militia, severely beaten and wishing to carry out a greater retaliation for the attacks, finally agreed to Egyptian mediation and pressure from its older brother and at the same time rival, the Islamist group Hamas, which did not intervene in the confrontation against their common enemy.

Truce,which, like the previous ones, was preceded by mutual attacks until the last second and even with some sporadic Jihad projectiles minutes later, is based on a return to the previous situation of calm, even if it was tense. In other words, the border crossings of the needy Gaza will be reopened, a vital point for the entry of fuel and the exit of 14,000 Palestinian workers to Israel. Egypt also agrees to try to achieve the release of a Jihad prisoner on hunger strike for the "administrative detention" of him and one of his leaders in the West Bank, Bassam Sadi, arrested last Tuesday. Since his arrest, this group promised an immediate response that, according to Israel, was aborted on Friday, with its deadly attack on the military chief of northern Gaza, Taysir al Jabari.

Since Friday, 43 Palestinians - militiamen and Jihad commanders and more than 15 children and women - have died since the beginning of the Israeli operation while the thousand projectiles fired from Gaza have not caused deaths in Israel due to the effectiveness of the defensive batteries " Iron Dome" (97%) and the fact that Jihad's weapons do not have the range, effectiveness and accuracy of Hamas. The Army indicates that 20% of the projectiles against Israel fell by mistake on Gazan territory and denounces that they caused the death of numerous Palestinian civilians. Israel released the video of one of these erroneous Jihad launches that hit the Jabalia refugee camp causing the death of four children, confronting the version of the Palestinian group that blamed Israel.

For the first time in the escalation, Islamic Jihad launched projectiles against Jerusalem this Sunday, being intercepted on the outskirts shortly before some 2,000 Jews visited the Esplanade of the Mosques (Islam) or the Temple Mount (Judaism) on the occasion of Tisha BAvwhich commemorates the destruction of the two Temples. Early in the morning and after confirming the selective assassination of the Jihad military leader in southern Gaza, Khaled Mansur, the Palestinian militia warned: "Mansur's blood will set fire to the defense system of Jerusalem and the Al-Aqsa Mosque, in which the settlers will break in today." Despite fears, the shrine in the Old City was not the scene of further clashes, helping to draw Hamas away from the fire.

The head of operations of the Army, Oded Basiuk, assures that " the entire command leadership of the armed wing of the Islamic Jihad terrorist group has been neutralized"That is why it is not surprising that the leaks and statements by Israeli military ministers and spokesmen reflected the desire for an immediate truce. "All the objectives have been achieved and now there can only be complications," the high security commanders told Prime Minister Yair Lapid, who is also in favor of ending the operation, aware that it is better to end now, without Israeli deaths, with Jihad subdued and not risk Hamas, with an arsenal of projectiles superior in quantity and quality, intervening lengthens more days as Palestinian sources.

In this sense and before the criticism of Jihad for its passivity, the spokesman for the Islamist group, Fawzy Barhum, declared that "the resistance, with all its military weapons, is united in this campaign and will say its words with all its might." "We will not accept the continuation of the current situation as it is. We will protect our people in the Gaza Strip, persecute Israel and defeat it as happened in all campaigns," he added.

For most of the day, Jihad's message to the Egyptian mediator was identical: "At the moment we are not interested in a truce." The need for revenge for the attacks and Iranian influence explained Jihad's reluctance to agree to a truce. This was admitted in the morning to the Lebanese chain Al Mayadeen, linked to the Lebanese ally Hezbollah with which it shares the military and financial umbrella of Israel's great enemy, Iran. "They talk about negotiations and ceasefire but we focus on the confrontation with the Zionist enemy who must pay for his crimes against the Palestinian people," said Jihad spokesman Tarik Salmi hours before the agreement.

His group was under enormous pressure last night from Hamas, Egypt and Qatar (which gives 30 million dollars a year to the Gaza Strip to pay salaries and finance projects) to accept the ceasefire, which is a great relief for the area and especially for Gazans.