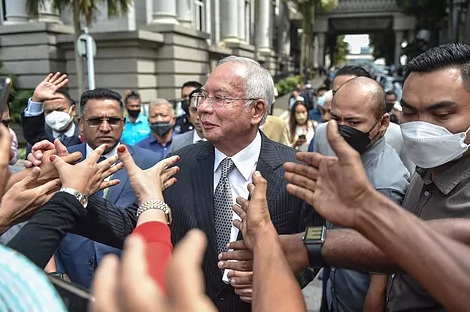 Added to the prison sentence is the imposition of a fine of 47 million euros for abuse of power and money laundering.

Malaysia's Federal Court on Tuesday upheld the 12-year prison sentence for corruption against former Prime Minister Najib Razak in connection with the embezzlement of the state fund 1MDB.

The judges of the court have unanimously rejected the former president's appeal against the conviction issued in July 2020 and confirmed by an appeals court in December of the following year for the misappropriation of 42 million ringgit (9.9 million dollars or €8.8 million) from the 1MDB while ruling the country.

The former leader, who ruled the country from April 2009 to May 2018 and pleads not guilty to the accusations related to the 1MDB, will also have to pay a fine of 210 million ringgit (46 million dollars or 47 million euros ). The crimes that are imputed to the former leader are abuse of power and trust, and money laundering for the diversion of millions to his private accounts.

In addition, Najib faces three other trials and dozens of charges in this sovereign wealth fund corruption case, which has affected former Goldman Sachs bankers accused of accepting bribes and laundering billions of dollars from 1MDB, according to a judicial investigation in the United States.

Among other things, former Goldman Sachs employees financed the production of Hollywood movies such as "The Wolf of Wall Street" and bought jewelry, luxury real estate and even a Jean-Michael Basquiat painting for $51 million.

The 1MDB corruption scheme came to light in 2015, when a journalistic investigation exposed the multi-million dollar siphoning from the state fund to the private accounts of Najib, the fund's founder and then Prime Minister of Malaysia.

Najib and his associates diverted 4.5 billion dollars (4.532 million euros) from the investment arm of the Malaysian state to their private accounts, a scandal that led to his fall from power in 2018.