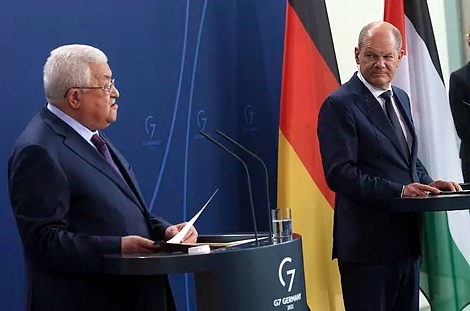 The president of the Palestinian National Authority (PNA), Abu Mazen, has exhausted much of the credit he still had among Israelis after he accused Israel of committing "50 holocausts" in Berlin on Tuesday during the press conference before a surprised Olaf Scholz, who hours later, strongly condemned his words.

Criticism and widespread discomfort in Israel and Germany , to which the United States joined, for what they consider "banalization of the 'Shoah' and false comparison" have forced Abu Mazen to clarify this Wednesday that he has not denied the existence of the Holocaust that defines it as "the most despicable crime in modern history" and has indicated that his intention was to speak of "the massacres of the Israeli forces against the Palestinian people since the Nakba". "Mahmoud Abbas's (Abu Mazen) accusation against Israel of having committed 50 holocausts while on German soil is not only a moral shame, but a monstrous lie," Israeli Prime Minister Yair Lapid has reacted. The centrist leader, whose grandfather was killed by the Nazis and his father survived the Holocaust, added on Twitter: "Six million Jews were killed in the Holocaust, including one and a half million Jewish children. History will never forgive him."

Abu Mazen's controversial words came after the last question at the press conference during his visit to Berlin. When asked by a journalist if he would apologize or show remorse for the terrorist attack carried out by a command linked to Al Fatah - a Palestinian group he has led since the death of Yasser Arafat in 2004 - at the Munich Olympics in September 1972, causing the death Of 11 Israeli athletes and a German policeman, Abu Mazen replied: "If you want to go back in time, let's do it. From 1947 to today, Israel has committed 50 massacres in 50 Palestinian villages. 50 massacres, 50 holocausts... ".

Scholz did not need the simultaneous translation to understand what his guest was saying, since he resorted to English for the word "Holocaust". The foreign minister's face showed perplexity and anger, but he did not intervene to reply since, at that moment, his spokeswoman declared the press conference over. His lack of immediate reaction caused a lot of criticism, especially in Germany. Hours later, Scholz was disgusted by the "outrageous comments" of the Palestinian leader.

"Particularly for us Germans, any relativization of the Holocaust is intolerable and unacceptable. I condemn any attempt to deny the crimes of the Holocaust," tweeted Scholz, who during the press conference distanced himself from the use of the word "apartheid" by Abu Mazen. "It is not correct to describe the situation," corrected the German leader who, in another message to the veteran 'rais', was in favor of calling Palestinian elections for the first time since 2006.

Abu Mazen's words do not exactly help him at the international level in his political decline, and further remove the possibilities, already minimal, of resuming the peace process stalled since 2014. As expected, they have also had a great impact on the Israeli political class due to the sensitive content, Abu Mazen's academic background on the 'Shoah', the chosen venue and the fact that the country is in an electoral campaign ahead of the November 1 elections.

The so-called "speech of the 50 holocausts" has been condemned by the vast majority of the Israeli political arch, which agrees that it is a "shameful and false comparison." But, while on the left - present in the government - they recall that Abu Mazen's words do not subtract or change the urgent need for a peace agreement based on a two-state solution and affirm that the Palestinian leader opposes terrorismand advocates negotiation with Israel, on the right -both in the coalition and in the opposition- they demand the immediate cessation of the meetings of some ministers with Abu Mazen alleging that he is a "Holocaust denier who, as Palestinian president, wants to take soldiers to the Tribunal in The Hague and pay salaries to terrorists and relatives who committed attacks in Israel".

In the crosshairs of the opposition darts is Lapid, a supporter of the resumption of negotiations with the Palestinians, although when circumstances allow it, and, above all, Defense Minister Benny Gantz, who in recent For months he has met with Abu Mazen in Ramallah and in his own home in the town of Rosh HaAyin. "I call on the prime minister and the defense minister to stop giving him legitimacy, meet and talk to him," says finance minister Avigdor Lieberman, who accuses Abu Mazen of "Holocaust denier and terrorist who exercises diplomatic terror." ".

Gantz, who rejects criticism for meeting with Abu Mazen by pointing out that this ensures security coordination between Israel and the PNA and encourages civilian projects for the Palestinians, has condemned the "despicable and false words of Abu Mazen": "The The unfortunate and unfounded comparison between the Holocaust, which was carried out by the Germans and their allies in an attempt to exterminate the Jewish people, and the Israeli Army, which protects its citizens and sovereignty from brutal terrorism, is Holocaust denial."

This is a new blow to the Israeli left, which demands the resumption of the peace process, and to Lapid, who is the first head of government to support the two-state solution, -and not only at a declarative and conditional level as Netanyahu varies times - since the resignation of Ehud Olmert in 2009.

The director of the Holocaust Museum, Yad Vashem, Danny Dayan, denounces that Abu Mazen's words are "a disgusting baseness that has no forgiveness" adding that "today no one can deny the Holocaust, but ways are used to reduce its true dimension and make false comparisons".

In his thesis on the Holocaust in the Soviet Union in 1982, Abu Mazen raised doubts about the number of Jewish victims and pointed to contacts between Nazism and Zionism. In 2014, however, the Palestinian president denied any denial of the Shoah, noting that "what happened to the Jews in the Holocaust is the most heinous crime against humanity in the modern era."