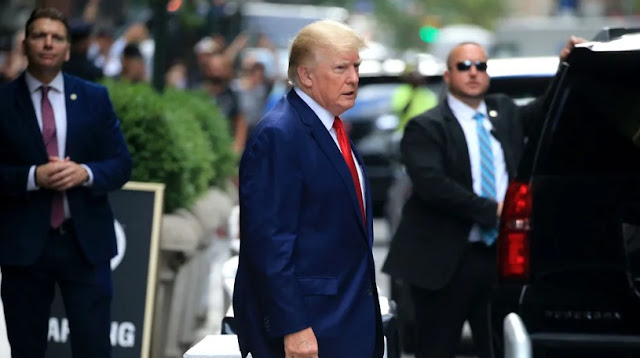 The US Attorney General refuses to release documents on the search of the former President. A court could now ensure more transparency.

A Florida judge has ordered the partial release of documents authorizing a search warrant for ex-President Donald Trump's home . Judge Bruce Reinhart, at a hearing, directed the Justice Department to make redaction proposals next week, US media unanimously reported from the courtroom. Several media had requested publication.

The Department of Justice, however, had argued that this could affect future investigations and the cooperation of witnesses. Jay Bratt, the department's head of counterintelligence and export control, told the judge releasing the statement was not in the public interest because it could harm the ongoing investigation.

It is considered very unlikely that the entire documents will become public. The filings are likely to contain important details about the Justice Department's investigation. They are the basis for the search warrant that the FBI federal police used to search Trump's Mar-a-Lago estate in Palm Beach earlier this week. At the same time, the judge approved the release of some procedural documents.

In Mar-a-Lago, the FBI also found and seized documents classified as top secret. Trump argued that he released the documents at the time. Incumbent presidents do have far-reaching powers to lift secrecy. But for the release of documents there is a formal procedure with several official steps.

Trump also claimed that there was a permanent corresponding instruction in place for all documents he took home. CNN reported that 18 former senior Trump administration officials told the broadcaster they had never heard of such an order while working for Trump.