Donald Trump: You Can't Get Rid Of Him Without Handcuffs 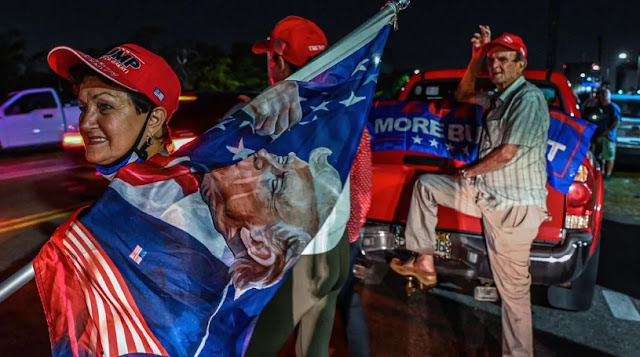 It has long been known what Donald Trump thinks of law and order or even just the necessary bureaucratic customs in a democracy. It is hardly surprising that the former US President could not have taken it so seriously with the documentation requirements of his office. The fact that important, especially confidential, documents sometimes had to be torn out of the trash can in order to save them for the archive, or even ended up in the toilet – who is really surprised?

The latter had already become known months ago, now there are even pictures . The US journalist Maggie Haberman will publish her book Confidence Man in October and will certainly have more to report on this matter. Trump has also been under investigation for a very long time, because he is said to have taken boxes of papers and whatever else he could carry with him when he had to leave the White House. According to everything that is known so far, that was also the reason why dozens of FBI agents searched his private club Mar-a-Lago for hours on Monday morning. Trump had already handed over 15 boxes of documents to the archive in the spring, but the authorities had to realize that that was not all.

As is so often the case with Trump, the matter is already historically unique. The fact that the federal police searched the private property of an ex-president, according to his information, breaking open a safe, unannounced and extremely thoroughly, has never happened in the USA. Even Richard Nixon was spared in the Watergate scandal, in the end he dutifully left everything behind, as far as is known. The corresponding law was passed at that time: Presidents and government employees have since had to transfer all files and processes during their term of office to the National Archives. Unlike Trump, Nixon also knew when it was over and left - by the way, exactly on the day of the raid that took place 48 years ago.

Trump himself called the search an " attack" that could otherwise only take place in "broken Third World countries". Well, what can one say: no - because the requirements for such an action, about which the authorities have not yet released any further information, are extremely high. FBI Director Christopher Wray, who was appointed by Trump at the time, cannot do this alone. Not just the Justice DepartmentThe action is likely to have been signed at the highest level, at the head of which Merrick Garland has so far attracted attention with careful restraint in the investigations against the ex-president. Most importantly, a federal judge must have authorized the search because he or she believed evidence of a crime could be found at Mar-a-Lago. Several years of imprisonment are available for suspected confiscation of confidential documents.

As expected, Trump is fuming. For him, the numerous ongoing investigations are part of a "political persecution" orchestrated by "radical left-wing democrats." What is remarkable, however, is the extent to which leading Republicans are still involved in this narrative. House Minority Leader Kevin McCarthy, for example, said the extent to which the Justice Department was being weaponized was becoming intolerable. In the autumn, the Republicans want to regain the majority in the congressional elections. Should they be successful, McCarthy now promised to want to overwhelm the authorities with investigations that would leave "no stone unturned". This seems to have been the plan for a long time: basically keeping the government from doing its work with countless committees. Ironically, McCarthy recommended to Attorney General Garland that he keep his files. And: "Keep your calendar clear."

What Trump still wants to see behind the investigation against him: the Democrats' attempt to prevent him from running for president again in two years. The old witch hunt. In contrast, in the committee of inquiry into the storming of the Capitol on January 6, 2021, he had recently been increasingly burdened by testimonies. He is said to have known what the demonstrators were up to, that they were armed, and deliberately goaded them. However, it seems anything but certain that there will be real consequences for Trump in the foreseeable future, especially in terms of criminal law.

Against this background, the Florida search is much more acute. Everyone who was involved should be very aware of how politically sensitive such a step is - they must therefore be very sure of their cause. Observers therefore assume that the authorities actually have something in hand and, above all, believed that they could get hold of even more - possibly also in connection with other investigations. And for lax handling of confidential or classified documents affecting national security matters, Trump could also be barred from holding any public office.

However, it is not yet foreseeable whether it will come to that and how long a possible procedure would take. Until then, Trump and his convinced or forced allies - because the party simply cannot break away from him even if they wanted to - will exploit the scandal with relish as usual for polarization in the never-ending election campaign. See McCarthy. Or Ron DeSantis, governor in Florida, who spoke of a " banana republic" ranted.

You will certainly come back to the e-mails from Hillary Clinton, who used a private e-mail server for official communication when she was Secretary of State. That was always Trump's favorite distraction in the dispute with her as an opposing candidate all allegations against him. And if he should compete again in 2024, he'll be fine with any dirt again. He can't wash himself clean anymore. But apparently you can't get rid of him without handcuffs either.