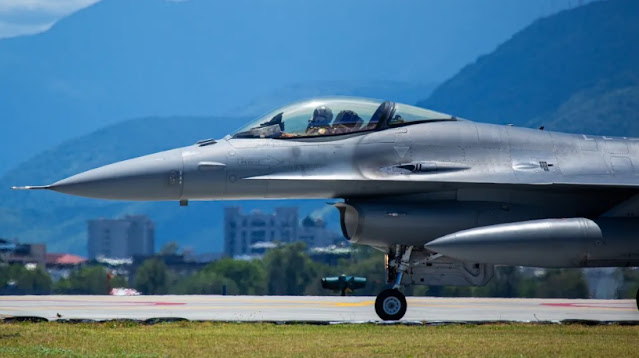 Taiwan's military has spotted Chinese drones over its territory. The president of the island state condemned the exercises as an irresponsible threat.

China has continued its large-scale maneuvers around Taiwan. As Taiwan's military reported in Taipei, 20 Chinese military aircraft and 14 warships took part in the exercises the day before. On the high seas in the Taiwan Strait, Chinese and Taiwanese warships had played cat-and-mouse games on the high seas. Some of the Chinese ships are said to have crossed the unofficial border line, a person familiar with the matter told Reuters. Taiwan then tried to prevent them from doing so. However, both sides showed restraint.

Chinese drones were also observed again over the offshore island of Kinmen in Taiwan, which is only ten kilometers from the port city of Xiamen on the Chinese coast. According to experts, there had been no overflight of the island, also known as Quemoy, since the 1950s. Taiwan's President Tsai Ing-wen condemned the exercises as an "irresponsible threat" not only in the Straits of Taiwan but also to the region as a whole.

The Chinese leadership in Beijing launched the maneuvers in response to the visit of US House Speaker Nancy Pelosi to Taipei this week. The exercises are scheduled to end this Sunday. It is China's largest show of military power against Taiwan since missile exercises in the mid-1990s, when the United States deployed two aircraft carriers to the Taiwan region.

China is simulating the attack on the island

Pelosi's visit to the island's democratic republic was the highest-ranking visit from the United States in a quarter of a century. China is angry because it claims Taiwan as its own. It sees the island as part of the People's Republic, threatens to conquer it and vehemently rejects official contacts with other countries. But the Taiwanese have long seen themselves as independent.

At the peak of the maneuvers last Thursday, China's air force had flown more than 100 missions with fighter jets, bombers, early warning and tanker aircraft and other military aircraft, according to the Eastern Command of the People's Liberation Army. Eleven ballistic missiles were also launched from the mainland. According to press reports, one of them flew near the capital and thus for the first time directly over Taiwan.

After initially practicing for a sea and air blockade, the Chinese armed forces simulated an attack on the island on Saturday, according to Taiwanese sources. China's Eastern Command confirmed that "assault skills" had been practiced. According to Chinese experts, the maneuvers also serve to prepare for an invasion of the island, which has a population of 23 million.

Meanwhile, China's exports continued to perform better-than-expected in July. Exports rose 18 percent in US dollar terms from the same period last year, China Customs reported. Imports increased by 2.3 percent. Western experts had actually predicted a slowdown in export growth. A similar increase of 17.9 percent was recorded in the previous month.

New day of war games in the South China seas. The Beijing army had announced that the most voracious military maneuvers in memory in the waters surrounding Taiwan would end on Sunday. But both in the political circles of the capital of the Asian giant, as well as the premonitions of international analysts, predict that the limit crossed by the second world power on the island will endure with more incendiary movements in the coming months.

On the fourth consecutive day of maneuvers in the Taiwan Strait, the warplanes and frigates of the People's Liberation Army (PLA) have followed the script of previous days: crossing the median line that divides Chinese and Taiwanese territorial waters, exercises with live ammunition in the waters of Taiwan and flights over the Kinmen archipelago, controlled by Taiwan but less than 10 kilometers from the Chinese province of Fujian. Warships and fighter jets have circled Taiwan again.

"We continue to detect multiple waves of Chinese military aircraft, warships and drones operating in the Taiwan Strait area and conducting joint air and sea drills, simulating an attack on Taiwan proper and attacks on our warships," he said. the morning the Ministry of Defense of the island. "People's Liberation Army forces have also sent drones to harass our outlying islands ," he continued. Precisely, these small islands controlled by Taiwan, such as Kinmen, have been one of the centers of debate in the meetings of the Chinese military commands these days.

According to Chinese Foreign Ministry sources, the most extreme sector of the army was in favor of taking some small territory controlled by Taipei as a more forceful response to Pelosi's visit. In response to China's latest drills on Sunday, Taipei, as it has been doing these days, deployed air and naval patrols, and activated its ground-based missile systems. "China has arrogantly used military actions to disturb regional peace and stability. We condemn foreign enemies who try to undermine the morale of the Taiwanese people," Taiwan's prime minister Su Tseng-chang said on Sunday.

Beijing's show of military force in response to US House Speaker Nancy Pelosi's whirlwind trip to Taipei earlier in the week appears to have fizzled out in the afternoon (local time) according to the Chinese timetable. Taiwan's Ministry of Transportation said flights through its airspace have gradually resumed as most notifications of Chinese military exercises near the island "were no longer current." An announcement that is a respite from fears about the impact of the Chinese blockade on global supply chains due to the prolonged interruption of transport.

The Taoyuan International Airport in Taipei said they expect air traffic to resume normally from Monday. Since Thursday, more than 900 international flights have been affected and more than 200 cancelled. Quiet week next in Asian lands? It does not seem. The PLA Eastern Theater Command, the section of the Chinese army that supervises the Taiwan Strait, which was the one that demarcated six zones around the island to carry out military exercises, announced on its Weibo channel, the Chinese brother of Twitter, that on Monday it will carry out more exercises in the southern part of the Yellow Sea, near South Korea. These will run until August 15. More prolonged, until September 8, will be other announced battle drills in the Bohai Sea, at the northern end of the East China Sea.

The other news of the day was an announcement by the Taiwanese navy: it will carry out two large-scale live-fire artillery exercises this week in the south of the autonomous island that China considers a breakaway province. The Hong Kong newspaper South China Morning Post reports that the military units involved in the operation include the artillery command, infantry troops stationed in Pingtung, the Hualien defense command and the island's coast guard. In addition, 78 locally developed light mortars and six US-made howitzers would be used to fire projectiles into the air and sea.

On Thursday, the first day of invasion drills by Beijing after Pelosi passed through Taipei, the most prominent move in the military arena was the launch of 11 ballistic missiles. At least four, according to Japan, flew over Taiwan's sky. On Friday, 68 warplanes and 13 navy ships circled the island. Although the most prominent news was in the eight countermeasures that China imposed on the United States, such as suspending the high-level security dialogue with Washington, a key communication channel to avoid accidents, and other miscalculations that could lead to a greater conflict.

On Saturday, the exercises focused on a full simulation of a future invasion from the six demarcated areas around Taiwan that have blocked some air traffic and trade with the island in recent days. Beijing tried to besiege the island under a trade lock on the island, managing to divert sea and air routes. The Chinese government also announced several sanctions packages, such as restrictions on Taiwanese agricultural products and imports of natural sand. China is Taiwan's largest trading partner, with bilateral trade of 328.3 billion dollars last year.

For Beijing, Pelosi's journey crossed a red line. Chinese leaders are used to responding with invasion threats whenever Washington officials visit Taiwan. Up to 20 times US congressmen, former senators and second-tier diplomats have traveled to Taiwan since 2018. China's threats usually turned into Chinese fighter raids on the island's air defense zone. But this time it was different.

Pelosi is the highest-ranking American politician to set foot on Taiwan since her Republican predecessor, Newt Gingrich, did so in 1997. Beijing understood the trip as a historic provocation by its biggest rival on the global geopolitical board, which intends to challenge the Chinese dragon. to maintain its hegemony at all costs. In the midst of a new Cold War between the two superpowers, the Asian giant is convinced that Washington is moving in the direction of breaking its traditional ambiguous position, under which it maintains relations with Taiwan while recognizing Beijing's position: only there is a Chinese government in every Mandarin-speaking territory.

Hua Chunying, a spokesperson for the Chinese Foreign Ministry, yesterday accused the United States of interfering in Beijing's internal affairs. "The United States should stop trying to hollow out the one-China policy," he added, referring to an agreement dating from the 1970s under which countries can maintain formal diplomatic relations with either China or Taiwan, but not both.

This weekend, Chinese state media boasted that only a few US allies, such as Japan and Australia, were "in lockstep" with Washington's position, while China "has already received the support of more than 160 countries with regarding her legitimate response to safeguard her sovereignty, and the vast majority of members of the international community are condemning or expressing concern over Pelosi's provocative and irresponsible visit that threatens and damages world peace."

That is the summary made on Sunday by the Global Times, a tabloid edited in English, which forgets that, together with the United States, the European Union, the foreign ministers of the G-7 and the countries of the ASEAN bloc (Southeast Asian) called on China not to use Pelosi's visit as a pretext for military action against Taiwan. NATO Secretary General Jens Stoltenberg also noted that China had no reason to "overreact" after Pelosi's controversial trip.