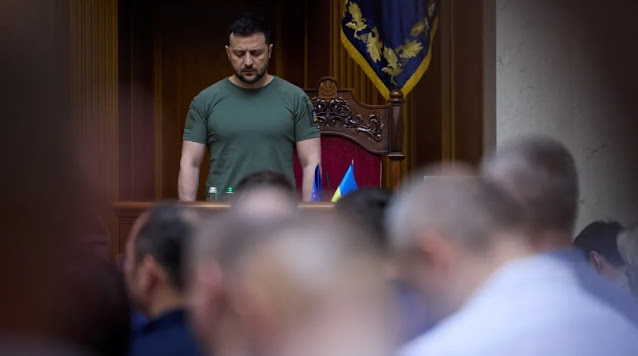 The military has caused irritation with various announcements. President Selenskyj said he was not informed of the ban.

Ukrainian President Volodymyr Zelensky has criticized the military's announcement that conscripts will no longer be allowed to leave their home region without special permission. The decision to allow freedom of movement for conscripts, conscripts and reservists caused "misunderstanding and outrage," he said in a video message published on Telegram.

He will demand an explanation of the reasons behind the decision from the Minister of Defence, the Chief of the General Staff and the Commander-in-Chief of the Ukrainian Armed Forces, General Valeriy Salushniy. According to Selenskyj, these are apparently not known: "I promise the people to clarify the matter and ask the general staff not to make such decisions without me," he said.

Criticism of the order of the General Staff

The General Staff had previously caused irritation and criticism with various announcements about the freedom of movement for men between the ages of 18 and 60. Initially, the military had announced, citing the Conscription Act , that conscripts would only be allowed to leave their places of residence in the future with a special permit from the responsible district military offices.

A representative of the general staff later said on Ukrainian television that the ban only applies to leaving the respective home region, comparable to German federal states. Conscripts could continue to move freely within the regions. General Zalushniy announced that no physical measures to restrict freedom of travel were in preparation. He called on people to contact the district military offices and apply for approval. This should be valid between 30 days and one year.

The General Staff justified the decision, among other things, with the return of numerous men to their home regions and the resulting need to review "the current mobilization potential". Critics complained, among other things, that the order would encourage corruption in the responsible authorities and cause the loss of train, bus and truck drivers.

Military-age Ukrainian men have only been allowed to leave the country with special permission since the government declared martial law on the day of the Russian attack. After an extension approved by Parliament in May, this initially applies until August 23. Border guards regularly catch men attempting to cross the border illegally. Tens of thousands of people had signed a petition submitted to the President's Office to lift the ban.