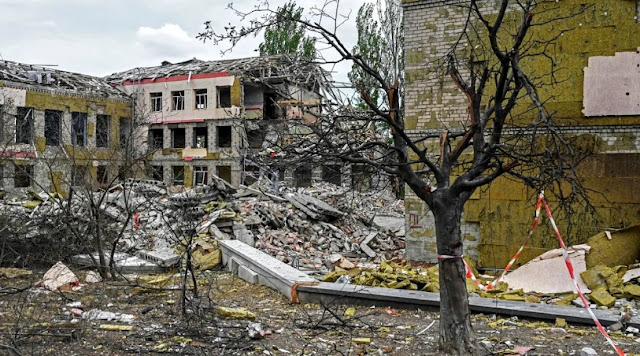 According to the Defense Ministry, Ukraine has received the first three Gepard anti-aircraft vehicles from Germany. In addition, tens of thousands of shots were handed over, Defense Minister Oleksiy Resnikov said on Ukrainian television. The German Defense Minister Christine Lambrecht (SPD) had actually promised to deliver a total of 15 such Cheetah tanks in July.

Meanwhile, fighting in Donbass continues. According to the Ukrainian military, Russia is trying to take places near the Kramatorsk and Sloviansk conurbations. The general staff reports fighting in Spirne, 30 kilometers east of the two cities. The mayor of Sloviansk also warned the city's residents of a failure of the heat and water supply in the coming winter. He called for escape. There is already no gas or running water in the city. The power supply keeps failing. For Russia, Kramatorsk and Sloviansk are the keys to taking the entire Donbass.

Despite the recent Russian attacks on the southern port city of Odessa, Ukraine is expecting the first grain exports by sea within the next few days. This is to implement the agreement signed in Turkey to resume deliveries. The port was shelled on Saturday, just one day after the agreement was signed. The government in Moscow claimed responsibility for the attack, but stated that only military targets had been hit.

The most important events of the day in brief:

Gazprom is again reducing the delivery volume through the Nord Stream 1 gas pipeline to just 20 percent. As of Wednesday, only 33 million cubic meters of gas would flow through the most important supply line to Germany every day, the company said. Gazprom gave the repair of another turbine as the reason, the federal government contradicts this statement.

The Kremlin sees the United Nations as having an obligation to help dismantle Western sanctions against Russian food exports. Russia is referring to an alleged agreement. However, the UN and EU do not see any such sanctions in force.

Britain is stepping in for Ukraine and hosting next year's Eurovision Song Contest. Ukraine won the competition in May and should therefore actually host the 2023 ESC final as the winner.