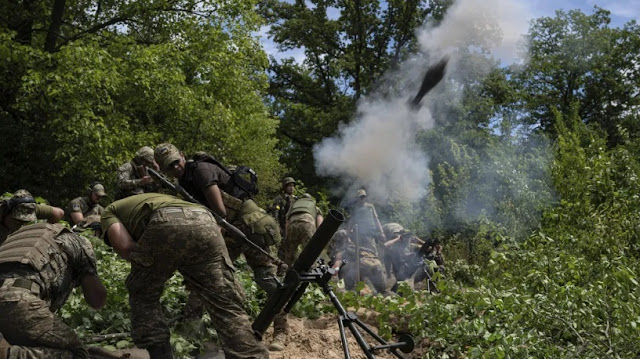 Russian President Vladimir Putin warns Europe that gas supplies from Russia will continue to fall. If the turbine for the Nord Stream 1 pipeline repaired in Canada does not arrive in Russia soon, the daily delivery volume will fall even more, he said at a meeting in Tehran, according to the Russian state news agency TASS. We have one more route ready - that's Nord Stream 2. We can put it into operation," Putin said at the same time. While Russia's army is waging war in Ukraine, Putin appeared as an ally of Syrian President Bashar on his second trip abroad since the invasion began al-Assad and demanded the inviolability of the Syrian borders.

He accused Ukraine of not being interested in a peace solution. At the negotiations in Istanbul at the end of March, both sides "actually reached an agreement, it just had to be signed," said Putin. Since then, however, Kyiv has refused to implement the solution that was reached. During the March negotiations, both sides reached rapprochement on the issue of Ukraine's non-aligned status. However, Russia is also insisting that Ukraine recognize Crimea, which Moscow has annexed since 2014, as Russian and cede the Donetsk and Luhansk regions.

Meanwhile, Ukrainian President Volodymyr Zelenskyy is reorganizing his security apparatus and unveiling a new commission to monitor the use of Western weapons. There are no allegations of misuse of weapons from the West, Zelenskyj said in his video speech. "But in order to eliminate all manipulations by Russian propagandists and those who help them in Ukraine or elsewhere, such an additional parliamentary control instrument will be established," he said.

After the recent dismissals of the head of the secret service and other executives in the security organs, Zelenskyy wants to push ahead with the realignment of these agencies. He appointed new heads of the SBU secret service in five regions and reported on the dismissal of another SBU deputy head. Most recently, there had been criticism of possible secret betrayal in the authorities and ongoing corruption.

The other events of the night at a glance:

The first lady of the United States, Jill Biden, received the Ukrainian first lady Olena Selenska at the White House. US President Joe Biden also received Selenska. Selenska wants to advertise further military aid for Ukraine on her trip to the US.

The US wants to supply Ukraine with more weapons. "Later this week, the administration will announce the next presidential arms and equipment package for Ukraine," said White House communications director for the National Security Council John Kirby. This will contain more of the Himar-type rocket launchers, which Ukraine has already used very effectively. Additional cartridges for multiple rocket launchers and artillery ammunition would also be supplied.

The US puts Russia on a blacklist of countries involved in human trafficking and forced labor. The list is part of a  report by the United States Department of State. The Russian government is also accused of recruiting child soldiers and kidnapping children to Russia.

Meanwhile, the fighting in Ukraine continues: fighting is taking place in the south and east of the country. Neither of the two parties to the conflict was able to achieve strategically important advances. However, according to Ukrainian information, the Russian armed forces made further gains in the fighting for the Donbass in eastern Ukraine.

That's going to be important today

The EU Commission is expected to present its emergency plan in the event that Russia no longer supplies gas through the Baltic Sea pipeline even after the end of the repair work on Nord Stream 1, which was originally expected on Thursday. Concerns about a Russian delivery stop had recently grown in the buyer countries.

Olena Selenska appears before the US Congress. House Speaker Nancy Pelosi has invited all members of her House and Senate to perform in the auditorium at the Capitol Visitor Center.