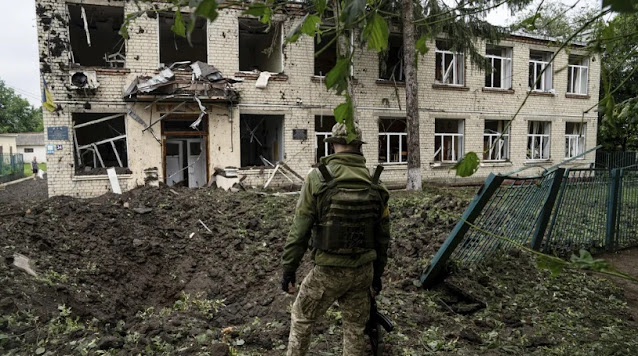 Ukraine's president accuses Russia of using fake news as a weapon. Rockets are said to have been fired from regions on the Caspian Sea.

Ukrainian President Volodymyr Zelenskyy has announced that his country will take back territory occupied by Russia. At the same time, he complained about targeted "information terror" from the Russian side, against which his compatriots had to arm themselves emotionally. Ukrainian Air Forces reported rockets fired at long range from the Caspian Sea region . Shortly before, the Ministry of Defense in Moscow had announced that it wanted to expand the attacks again almost five months after the invasion.

"We have already managed to liberate part of the territory occupied after February 24," said Zelenskyy in his evening video address. "We will gradually liberate other regions of our country that are currently occupied." Western weapons are also to be used to recapture occupied territories. Zelenskyy accused Russia of deliberately using fake news as a weapon in the war against his country. The Ukrainians need "a kind of emotional sovereignty" in order not to play this "information game", he said. Untruths, for example about allegedly prepared rocket attacks, only had one purpose: "to supplement the rocket and artillery terror against our state with information terror".

Russia has fired rockets at Ukraine from the Caspian Sea region, according to sources in Kiev. Four out of a total of six missiles were intercepted over the Dnipro areas in the east and Zaporizhia in the south, the Ukrainian air force said. Two more had hit agricultural land in the central Ukrainian region of Cherkasy. In addition to Russia, the South Caucasus Republic of Azerbaijan and Central Asian Kazakhstan also border the Caspian Sea. According to the Ukrainian account, Tupolev Tu-95 long-range bombers are said to have been deployed.

According to the pro-Russian administration of a region in south-eastern Ukraine , large quantities of grain are exported. "More than 100 wagons have already been dispatched, and another contract for 150,000 tons has been signed with a grain dealer," said the head of the Russian military administration in Zaporizhia, Yevgeny Balitsky. Ukraine has been accusing Russia of stealing grain for months . Balizki did not specify where the grain would be taken. It can only be transported by rail to Russia or to the Crimean Peninsula, which Russia has annexed since 2014.

The meeting of G20 finance ministers in Indonesia ended without a joint final declaration. At their two-day meeting on the island of Bali, the representatives of the 20 leading industrial and emerging countries could not agree whether a statement on the Ukraine war should be included, said Indonesian Finance Minister Sri Mulyani Indrawati. All participants agreed that the global food crisis must be addressed.

The US aircraft manufacturer Boeing anticipates greater demand for new jets over the next ten years, although Russia will no longer be a sales market. According to Boeing, 19,575 new passenger and cargo planes will be delivered between 2022 and 2031. This is slightly more than the 10-year forecast for 2021, when the company still counted 710 aircraft for Russian airlines. Western aircraft manufacturers and suppliers are no longer allowed to deliver machines and parts to Russia because of the sanctions.