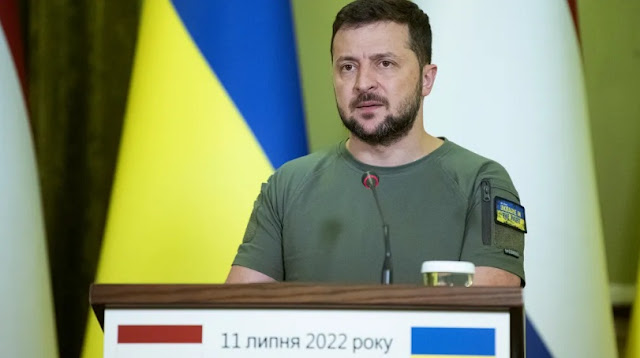 The Ukrainian President sees an advantage in the course of the war through western artillery. Three prisoners of the separatists are threatened with execution.

The Ukrainian President Volodymyr Zelenskyj is rather optimistic about the further course of the war - also because of the western arms aid. "The occupiers have already felt very well what modern artillery is. And they will no longer have a safe rear anywhere on our soil that they have occupied," Zelenskyj said in a video speech.

According to media reports, several Russian troops' bases, ammunition and weapons depots have been destroyed far behind the front lines in recent weeks. The Russian troops are now afraid of the Ukrainian army, also thanks to the activities of Ukrainian partisans in the occupied territory, Zelenskyy said.

They also lack "the courage to admit defeat and withdraw troops from Ukrainian territory." Despite high losses, they could only continue fighting thanks to the "inexhaustible stocks of old Soviet weapons," Zelensky said. Ukraine is able to defend itself and rebuild the country. In eastern Ukraine, pro-Kremlin separatists have lifted a moratorium on the death penalty in the Donetsk region. Ruler Denis Puschilin signed a corresponding decree, as reported by the Russian state news agency Tass.

Last month, the separatists sentenced three foreigners in the ranks of the Ukrainian army to death for "mercenaryism", two Britons and a Moroccan. The three men are currently awaiting a decision in the appeals process. According to the separatists, this should be completed in July. If the first instance decision is not overturned or the accused are replaced, they face the risk of being shot. Two Americans were also presented as prisoners on Russian television.

According to government sources, Germany will stop buying Russian coal after August 1 and Russian oil after December 31. "This will fundamentally change the country's energy supply," said State Secretary Jörg Kukies at an energy conference in Sydney.

Because of the Russian blockade of the Black Sea ports, the Ukrainian government wants to export grain by ship across the Danube. More than 90 ships are ready in the Romanian Sulina Canal, said Deputy Infrastructure Minister Yuri Vaskov.

The Russian authorities have launched criminal proceedings against opposition figure Ilya Yashin for spreading allegedly discrediting false reports about the army. If convicted, the government critic faces up to ten years in prison.

The US has given Ukraine an additional $1.7 billion in state budget grants. The salaries of health workers are to be paid with it, according to the US Agency for International Development in Washington.

The pro- Kremlin separatists from the self-proclaimed Donetsk People's Republic in eastern Ukraine have opened a diplomatic mission in Moscow. Accompanied by a massive police presence, it was inaugurated in the city center near western representations. High-ranking Russian representatives were not present.

According to official figures, Russia achieved a budget surplus of more than 20 billion euros in the first half of the year, despite the war and the associated sanctions . Overall, thanks to increased income, the plus is around 23 billion euros , the Ministry of Finance told the Interfax news agency. Russia is benefiting above all from the rise in oil prices.

DIHK President Peter Adrian has appealed to consumers and less energy-intensive companies to start saving energy consistently out of solidarity with industry . Adrian told the Rheinische Post that there was a real shortage of supply and the economy as a whole threatened with a crisis of unknown magnitude.

In the debate about prioritization in the event of a gas emergency, SPD Chairwoman Saskia Esken urges private households and social institutions to take precedence over industry and calls for a protective shield for consumers. Schools must also be protected, says Esken of the Rheinische Post newspaper.

In the small town of Chasiv Yar in eastern Ukraine, the death toll after a Russian missile attack has risen to 45. Nine people have been rescued from the rubble since the attack on Saturday, the civil defense in the Donetsk region said.