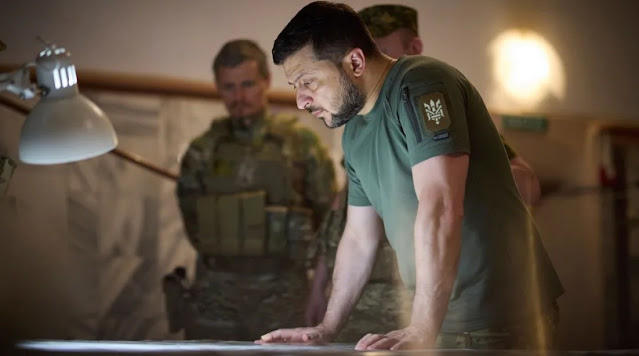 People in the Kherson and Zaporizhia regions are being asked to leave their homes. Ukraine collects evidence of Russian crimes.

The last most important natural gas connection from Russia to Germany will probably be shut down for ten days. This Monday at 6 a.m. the gas flow through the Baltic Sea pipeline Nord Stream 1 was to be stopped due to annual maintenance work and, according to the operating company, to be reopened in the early morning of July 21st. However, the great concern in the federal government and the Federal Network Agency is that Russia will not turn on the gas tap again after the work is completed.

After a devastating rocket attack in the Donetsk region that left many dead, Ukrainian President Volodymyr Zelenskyy threatened consequences to Russian soldiers. "Punishment is inevitable for every Russian murderer," Zelenskyy said in a video address. The attack on the town of Chasiv Yar showed once again that Russia's troops also deliberately killed in residential areas. "After such attacks, they won't be able to say that they didn't know or didn't understand something," said the Ukrainian head of state. Together with international observers, Ukraine has been collecting evidence since the beginning of the war in order to solve the crimes of the Russians.

In Chasiv Yar, 15 people have been pulled dead from the rubble of a five-storey house after the rocket fire on Saturday evening. The rescuers were able to save six other people alive. Rescue workers continued to search for victims. The rescue teams suspect around two dozen people under the rubble.

The Ukrainian leadership has called on civilians in the occupied south of the country to flee because of planned army offensives. Residents of the Cherson and Zaporizhia regions should urgently leave their homes - if necessary in the direction of the Black Sea peninsula of Crimea, which has been annexed by Russia since 2014, said Deputy Prime Minister Irina Wereshchuk.

Ukraine has protested against the planned delivery of the serviced Russian Nord Stream 1 turbine from Canada to Germany. The State Department said it was "deeply disappointed" by the Canadian government's decision.

FDP Vice Wolfgang Kubicki is irritated by statements by former Chancellor Gerhard Schröder (SPD) about his contact with Kremlin chief Vladimir Putin. Anyone who thinks that Germany has a diplomatic obligation to end the war in Ukraine is distorting the facts.

In view of the impending cost explosion, the CSU joins the union demand for a state gas price cap for private households. Otherwise, many private insolvencies would threaten.

More than 146,000 children and young people who fled Ukraine have been admitted to German schools. In view of the ongoing Russian war of aggression, they needed "full support", said Federal Education Minister Bettina Stark-Watzinger.

Since the beginning of the Russian war of aggression in Ukraine, the security authorities have  registered 701 anti-Russian and 592 anti-Ukrainian crimes  in Germany.

The gradual shutting down of the last most important connection for Russian natural gas to Germany, the Nord Stream 1 pipeline, has begun. Since 6:00 a.m., the gas flow has been shut down for the maintenance work that has been announced for a long time , said a spokesman for the operating company. It will take a few hours before the actual flow is completely zero. No more deliveries are already estimated for the market. According to the company, the work should last until July 21. In these ten days, no gas will be transported through the pipeline to Germany.

According to the information, among other things, safety systems, power supply, fire and gas protection as well as shut-off and isolation valves are checked and repaired or calibrated if necessary. Software updates are also carried out. According to the Federal Network Agency, the work is not taking place directly on the line, but at the compressor stations, for example in Lubmin. Under normal circumstances, the work should be completed within the planned period, the authority said. In the past, the duration of the work sometimes deviated slightly from the scheduled time.

Among others, German Federal Minister of Economics Robert Habeck (Greens) has expressed concerns that Russia could no longer turn on the gas tap even after the maintenance has been completed. The Russian state-owned company Gazprom had significantly reduced the delivery volume in June, citing technical problems.