Russia-Ukraine Conflict: Situation In Ukraine—Explosions In Mykolayiv, Arms Shipments From The United States 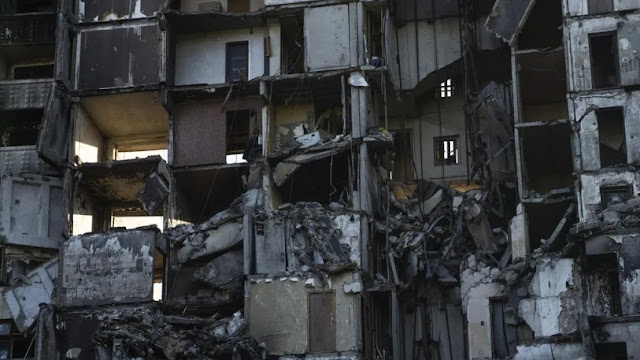 The mayor sent the residents of Mykolayiv to air raid shelters early in the morning. The US has promised more military aid.

In eastern and southern Ukraine, positions of the Ukrainian army along the entire front line have been shelled with artillery by Russian troops. Dozens of locations in Kharkiv, Donetsk, Luhansk, Zaporizhia, Mykolayiv and Kherson Oblasts were listed in the Ukrainian General Staff report published on Facebook on Friday.

There were also isolated attacks by airplanes and helicopters, it said. Ukrainian units repelled a Russian attack on a gelatine plant near the industrial city of Lysychansk in the Luhansk region. The reports cannot be independently verified. Early in the morning were in the Ukrainian city of Mykolaivhear detonations. "There are strong explosions in the city! Stay in the shelters!" Mayor Oleksandr Senkevich writes in the messaging app Telegram. The cause of the explosions is not yet known.

The US government promised Ukraine  further military aid for defense in the Russian war of aggression. The US$820 million package will provide the country with additional ammunition for the Himars missile launcher system, two Nasams surface-to-air missile defense systems, artillery ammunition and anti-artillery radars, among others. as the Pentagon announced. Much of the new aid does not come from US stocks, but from an agreement with industry.

According to its own statements , the United States has   promised or already delivered weapons and equipment worth almost seven billion US dollars (6.73 billion euros) to Ukraine since the beginning of the war at the end of February. Ukraine has accused Russia of dropping phosphorus bombs on Snake Island in the Black Sea. Two attacks with phosphorus bombs were flown from the Crimea peninsula, which Russia annexed in 2014, with Su-30 fighter jets, said the supreme commander of the Ukrainian army, Valeriy Zalushnyi.

He also presented a video that is supposed to prove the bombing. The day before, the Russian military had withdrawn from the island. Moscow had presented this as a "gesture of goodwill". Kyiv considers the retreat from the island captured by the Russians on the second day of the war as a victory as a result of frequent attacks.

Other important events of the night:

The US government sees the recapture of Snake Island as a success for the Ukrainian military. Russia's claim that the withdrawal was a goodwill gesture lacks credibility, a senior US Defense Department official said.

The German Federal Network Agency fears a total failure of gas supplies from Russia and is calling for greater efforts to save energy. The Nord Stream 1 pipeline will soon be undergoing regular maintenance – a conceivable reason for supply cutbacks.

The UN cultural organization Unesco has put the Ukrainian cooking culture of the beetroot soup borscht on its list of cultural heritage to be protected. The reason is a threat from the Russian war of aggression against Ukraine.