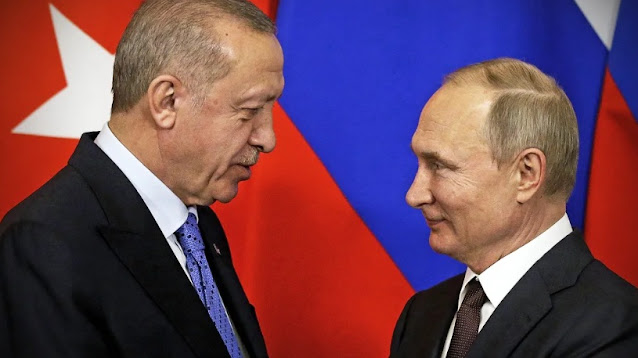 Vladimir Putin meets the heads of state of Turkey and Iran. Recep Tayyip Erdoğan and Ebrahim Raissi are becoming more and more important to him - especially economically.

When a train set off south from the small town of Chekhov near Moscow a few weeks ago, only a few industry experts kept an eye on the process. Laminated chipboard distributed in 39 blue containers began a journey of almost 4,000 kilometers. In earlier times they would probably have been shipped west via the port of St. Petersburg. Instead, this time it went by train via Russia, Kazakhstan and Turkmenistan to Iran . There the containers were loaded onto a ship that took them to India.

Above all, Russian and Iranian state media celebrated the transport as a harbinger of the new era. He followed the so-called north-south route - a project that was initiated years ago in Moscow and then forgotten again. Until now. The arrival of the first transport along this route just a few days before Russian President Vladimir Putin's state visit to Tehran was also intended to have a symbolic effect. Today, Tuesday, Putin meets Iranian leader Ebrahim Raissi and Turkish President Recep Tayyip Erdoğan , two men who will play an important role for Russia in the coming months and years. The proof that Russia has numerous alternatives to the former trade routes and partners in the West comes at just the right time.

Officially, the summit in Tehran is a meeting in the so-called Astana format. The foreign ministers and, once a year, the heads of state of the three countries meet regularly to discuss Syria's future. In the past two years, the meetings have been canceled due to the corona pandemic. So now the three are meeting face-to-face again – and this year they have far more to discuss than the situation in Syria. Expectations on the Russian side are high. "It is obvious that an axis of good is forming in the world," wrote Yevgeny Popov, deputy for Putin's United Russia partyin his Telegram group. The meeting is also given particular weight by US President Joe Biden's recent trip to the Middle East. Biden campaigned in Saudi Arabia for a coalition against Iran and for an increase in oil production to put pressure on Russia. Biden's trip was considered a failure by Russia 's state media, as Saudi Arabia did not promise an immediate increase in production and only wanted to consult with other members of Opec+, including Russia.

Putin wants to use his trip to Tehran to continue winning over Iran and Turkey. Relations, at least with Iran, have grown closer since Russia's final split with the West. A few weeks ago, Putin met his Iranian counterpart Raissi at a summit of the Caspian countries – and gave him a warm hug. Shortly thereafter, Putin spoke of reviving old plans for a north-south corridor, a trade route that would link Russia to India via Iran. Investments in ports and tracks are urgently needed. "Our relations with Iran have a deep, strategic character," Putin said.

Iran is also of other economic interest to Russia. At the end of May, Iran's economy minister, Reza Fatemi-Amin, said his country could supply gas turbines and parts for automobile production. Russian businessmen have often visited Tehran in recent weeks to discuss new import opportunities. In return, Russia could supply Iran with zinc, lead and aluminum. The Islamic Republic is also likely to be interested in Russian grain. In May, the Iranian state news agency reported plans to lease around 100,000 hectares of fields in Russia to grow wheat and barley there. Last year, Iran was the second largest buyer of Russian grain, just behind Turkey.

It remains unclear so far whether Russia will also receive military support from Iran. Last week, Jake Sullivan, the White House National Security Advisor in Washington, DC, reported on alleged talks between the governments in Moscow and Tehran to supply military drones. Representatives of the Russian army are said to have twice visited Iranian military airfields and inspected drones there. Among military experts, Iran is considered to be quite progressive when it comes to drone production.

Military experts close to the government received this report with enthusiasm. So far, the lack of modern strike and reconnaissance drones has been considered one of the weaknesses of the Russian army in Ukraine. Such a deal would be in the interest of the government in Moscow. Nevertheless, Putin's spokesman Dmitry Peskov later denied the alleged drone talks. The Iranian Foreign Ministry also announced that there had been no new developments in military cooperation recently. Russian experts on Iran also remain skeptical. Because a drone deal with Russia would further damage Iran's already tense relationship with the United States and Saudi Arabia and make an end to the sanctions against the country even more remote. " Another topic between Putin and Raisi is likely to be the competition between Russia and Iran for the Asian oil market. After Russia's attack on Ukraine, Iran initially benefited from rising oil prices. Recently, however, the country has had to discount prices to compete with Russian supplies.

From a Russian perspective, the talks between Putin and Erdoğan are no less importantwill. The relationship between Russia and Turkey has developed positively in recent years, despite numerous points of contention. Turkey is the only NATO member not to participate in sanctions against Russia. Many wealthy Russians have fled to Turkey in recent weeks, from where, unlike in the EU, they continue to have access to their assets in Russia. Turkish companies, especially machine builders and automotive suppliers, believe they have good chances of conquering the Russian market, which has now been abandoned by Western competitors. Istanbul has become the main hub for female airline passengers from Russia after all European states closed the airspace to Russian planes. Turkey is also of great importance for Russia's gas exports.

Another topic that will almost certainly come up in the talks between Putin and Erdoğan is Ukrainian grain exports . The Turkish government wants Russia to agree to an export corridor in the Black Sea. This is intended to lower prices - Turkey is a large grain importer. Russia, in turn, demands that the EU and the US do not impede Russian exports of wheat and fertilizers. Turkey has made good progress in the past few weeks as a mediator between Russia, Ukraine and the West, which could now be finalized at the meeting with Putin.

But the friendship between Russia and Turkey has its limits. On the one hand, Erdoğan is providing military support to the Ukrainian government with modern drones. In addition, the countries are pursuing different interests in Syria. Turkey recently announced an offensive in northern Syria, to the annoyance of Russia and Iran, in order to create – as Ankara puts it – a buffer zone on its own national border. The Turkish army wants to push back Kurdish militias in particular. A step that Russia and Iran reject because they fear a weakening of their ally Bashar al-Assad. For Erdoğan, however, the time seems right to demand concessions on the Syrian issue from Putin, who is waging a bloody and arduous war in Ukraine.