"We Haven't Even Started Seriously In Ukraine yet" 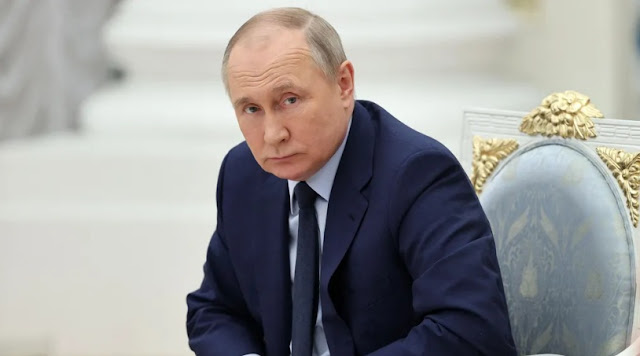 The West wants to beat its country on the battlefield, Russia's President Putin scoffs. He should only try this. The "special operation" is just beginning.

Russian President Vladimir Putin has warned the government in Kyiv and its allies against a protracted war in Ukraine. "Today we hear that they want to beat us on the battlefield. What can you say about that? Let them just try," he said in Moscow. "Everyone should know that we haven't really started yet."

The Russian President's speech was broadcast live on state television; it was his most combative since Russia's February 24 invasion of Ukraine.

He accused the West of fanning hostilities: "The West wants to fight us to the last Ukrainian." It is a tragedy for the Ukrainian people, but it looks like things are going in that direction. Putin reiterated his long-standing accusation that the West is using the conflict in Ukraine to try to isolate and weaken Russia. "They just don't need a country like Russia," he said. "That's why they used terrorism, separatism and internal destructive forces in our country." However, the Western sanctions have failed in their goal of "sowing division and strife in our society and demoralizing our people," said Putin.

The course of history is unstoppable, "and attempts by the collective West to impose its version of the world order are doomed to fail." The Russian intervention marks the beginning of a shift from US dominance in the world to a "multi-polar world". This process cannot be stopped, Putin stressed. Most countries in the world don't want to follow the Western model of "total liberalism" and "hypocritical double standards," Putin said. "People in most countries do not want such a life and such a future," stressed the Russian President. "They're just tired of kneeling themselves down in front of those who consider themselves extraordinary."

Putin also spoke for the first time in weeks about the possibility of negotiations. "At the same time, we do not reject peace negotiations," he said. "But those who refuse to do so should know that the longer it takes, the harder it will be for them to negotiate with us." No such talks are currently taking place. Russia had demanded that Ukraine accept Russian sovereignty over Ukraine's Crimean Peninsula, annexed in 2014 from Russia's Crimea. In addition, Russia insists on recognizing the independence of the separatist regions in eastern Ukraine.

At the same time as the G20 foreign ministers meeting, Vladimir Putin warned the West against a direct military confrontation. "Today we hear that they want to beat us on the battlefield. What can you say about that? Let them just try," said the Russian president in the Moscow Kremlin at a meeting with the leaders of the parliamentary factions. Russia "hasn't even really started" in Ukraine. In the meantime, the meeting of the foreign ministers of the 20 large industrial nations and emerging countries is taking place in Bali, Indonesia.

On the 135th day of the war, Ukrainian President Volodymyr Zelenskyy called on the West to continue supplying arms. Olaf Scholz (SPD) has confirmed that he will support Ukraine for as long as necessary. "We will show solidarity for as long - at least that's my wish - as is necessary so that Ukraine can defend itself against the terrible and brutal Russian attack," said the Chancellor on ZDF. He acted very carefully on the subject, said Scholz. Perhaps this is the basis for maintaining acceptance among the population even when the situation becomes more difficult.

The Ukrainian President demanded more arms from the West in the war against Russia. "The greater the defense assistance to Ukraine now, the sooner the war will end with our victory and the less the losses of all countries in the world will be," Zelenskyy said in a video message. The partners have accurate information about Ukraine's needs. "This applies to both air defense and modern artillery."

People were again injured or killed when places in the war zone in eastern Ukraine were shelled. In the Kharkiv region, authorities said three people were killed and five wounded by Russian attacks. Two people died and eight were injured in the towns of Kramatorsk and Avdiivka in the Donetsk region. Russian attacks only hit civilian targets, said the region's governor, Pavlo Kyrylenko. Pro-Russian separatists in the Donetsk region reported one dead and 11 wounded by Ukrainian shelling. Battlefield reports cannot be independently verified.

After his announced resignation as British Prime Minister, Boris Johnson assured President Zelenskyy of the United Kingdom's unwavering support. A government spokeswoman said Johnson had given assurances over the phone that Britain would provide vital "defensive aid" for as long as needed. Zelenskyy thanked Johnson for his "uncompromising support" since the beginning of the war.

At the start of the G20 foreign ministers' consultations on the island of Bali, Indonesian Foreign Minister Retno Marsudi called for an end to the Russian war of aggression. "It is our responsibility to end the war as quickly as possible. And to build bridges and not walls," said the politician. Shortly before, she had cautiously greeted the Russian Foreign Minister Sergey Lavrov in the seaside resort of Nusa Dua.