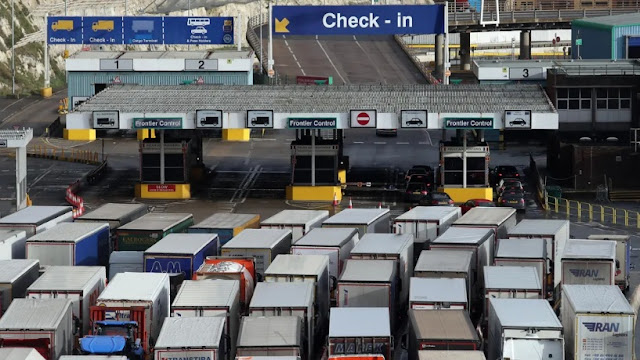 Holidaymakers and truck drivers are waiting in lines that stretch for kilometers at the port of Dover, because of Brexit there will be more controls. But the foreign minister blames France.

A high volume of travel and the additional border controls required due to Brexit have led to traffic jams spanning several kilometers on the way across the English Channel to France. Unions, port authorities and French authorities agreed on Saturday that the main reason for this was Britain's exit from the EU. The ferry company P&O Ferries said that car and truck drivers sometimes had to calculate more than six hours for the way to the port and through the security checks.

But British Foreign Secretary Liz Truss sees the blame elsewhere: The French border authorities are understaffed, said Truss, who is applying to succeed Prime Minister Boris Johnson. The government in Paris must do something "to solve the terrible situation that travelers, including families, are facing".

The prefect of the Hauts-de-France region, Georges-François Leclerc, said France had "done its job" by increasing its border staff in Dover from 120 to 200 people. But because of an accident on Friday, French border officials arrived late at their post in Dover. This caused delays. French Transport Minister Clément Beaune said French authorities were "mobilized" to ease traffic. However, France is "not responsible for Brexit".

With the UK leaving the European Union last year, border controls and additional formalities for freight transport were reintroduced. At the entrance to the port of Dover, there had therefore been repeated traffic jams, especially for trucks, in the past few months. In addition, there is now holiday traffic, which was not as pronounced last summer due to numerous corona restrictions. Lucy Moreton of the UK union ISU, which represents border, immigration and customs workers, said the traffic jams were a "reasonably predictable" consequence of Britain's exit from the EU.

French MP Pierre-Henri Dumont, whose constituency includes the French canal port of Calais, also called the travel chaos "a consequence of Brexit". "We have to carry out more checks than before," he told the BBC. There will always be traffic jams.