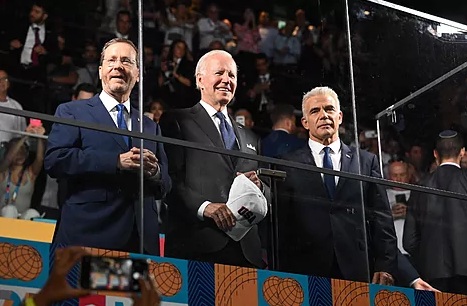 The United States affirms that the best way to achieve this is through diplomatic channels and the nuclear agreement, although "it is prepared to use all the elements of its national power" to ensure it. Lapid tells him: "Diplomacy and words will not stop Iran"

A few meters from the walls of the Old City, the Waldorf Astoria Hotel in Jerusalem has become the most luxurious fortress in Israel, serving as the setting for the meetings of US President Joe Biden on the second day of his first tour in the Middle East.

The leader has conveyed four central messages to Prime Minister Yair Lapid: the commitment to Israel's security ("as long as the US is there, you will never be alone"), the promise to avoid a nuclear Iran, the promotion of the normalization of relations with Arab countries and, finally, the need for a two-state solution to the Israeli-Palestinian conflict.

All this has been recorded this Thursday in the Jerusalem Declaration signed by Biden and Lapid. After guaranteeing the commitment "to preserve and strengthen Israel's ability to deter its enemies and defend itself against any threat", the US has indicated that "an integral part of this promise is the commitment that Iran does not acquire a nuclear weapon and that he is prepared to use all the elements of his national power" to secure it.

"We will not allow Iran to have nuclear weapons. It is in the vital interest of Israel, the US and the world. Diplomacy is the best way to achieve it," Biden repeated at the press conference in which the Israeli leader suggested another formula: "The only thing that will stop Iran is if it knows that further development of its nuclear program will cause the free world to exert its force. Mr. President, diplomacy and words will not stop them. The only way to stop Iran is put a credible military threat on the table."

According to Lapid, "the past year with Russia's unwarranted invasion of Ukraine, the escalation of the Iranian nuclear threat, and terror threats around the world has reminded us that to defend freedom, sometimes you have to use force." "From Jerusalem you travel directly to Saudi Arabia. Your visit to Saudi Arabia is important for Israel and the region. With you, we send a message of peace to all the peoples of the region, including the Palestinians," added the acting prime minister. until the November elections.

Biden adopts the Abraham Accords promoted by the Trump Administration . “This Friday I will be the first US president to travel from Israel to Saudi Arabia,” Biden declared that this Saturday he will announce in Jeddah the Saudi green light for the flight of Israeli airlines in its airspace. From his predecessor, he did distance himself from abandoning the Middle East: "We will not create a vacuum that can be filled by China and Russia against the US, Israel and other countries," he has warned. The close alliance does not hide differences in two fields summarized in two words: Ramallah and Tehran.

Although Lapid is the first Israeli head of government in more than a decade to openly support a two-state solution, the composition of his acting coalition and the political crisis make negotiations with the Palestinians impossible. Hence, in the Jerusalem Declaration, the two countries share their "commitment to initiatives that strengthen the Palestinian economy and improve the quality of life for Palestinians" but only Biden calls for the creation of a Palestinian state. Something that he will repeat with even greater emphasis in the meeting this Friday with the Palestinian president, Abu Mazen, in Bethlehem.

The two countries differ, above all, around the possible resumption of the Iranian nuclear agreement, although without maintaining the harsh media confrontation of 2015 when then Prime Minister Benjamin Netanyahu attacked President Barack Obama from Congress in Washington for sponsoring the pact with Tehran. Three years later, Trump abandoned him to the applause of Netanyahu. In the security agencies there are also differences. The Mossad considers that a nuclear deal as outlined in the talks is "dangerous" since it does not strike down the Iranian nuclear project and gives billions of dollars to the Revolutionary Guards and their militias. Military intelligence, for its part, admits that the agreement is bad, but better than the current situation in which Iran reaches unprecedented levels of uranium enrichment.

Lapid and Biden held a video conference with UAE President Mohamed bin Zayed Al Nahyan and Indian Prime Minister Narendra Modi . "Our countries do not share borders, but they do share the desire for prosperity, security and peace," said the Arab leader in a cooperation forum on areas such as energy or food security.

President Isaac Herzog has decorated Biden with Israel's presidential medal of honor in an act in which he has met with Netanyahu, whom he has known for 40 years. Still, many in the Biden Administration pray that he does not return to power.

Biden has sealed the day in Jerusalem in which he expressed his admiration inherited from his father towards Israel and the Jewish people, presiding over the opening ceremony of the Maccabiah, which brings together almost 10,000 Jewish athletes from around the world.