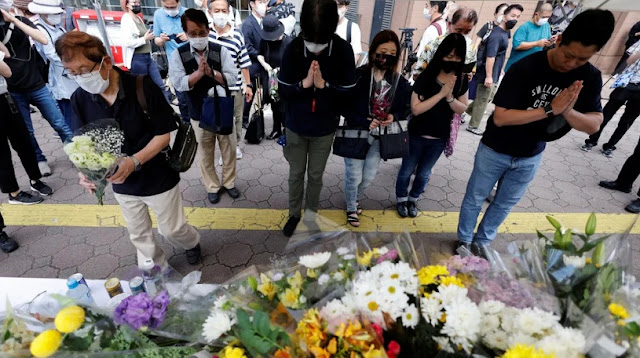 According to reports, after Shinzo Abe's death, there will be an investigation into whether there are enough precautions. The perpetrator reportedly harbored grudges against a religious group.

According to media reports, after the assassination of Japan's ex-Prime Minister Shinzo Abe, the National Police Authority wants to review its security protocol for prominent personalities for deficiencies. Among other things, experts are concerned with why the security personnel at the site of the election campaign could not prevent the attack with a self-made firearm. "I don't think there are enough firearm precautions in Japan with its strict gun laws," the Nikkei newspaper quoted a personal protection expert as saying.

The day before, a 41-year-old Japanese man approached Abe from behind during an election campaign speech in the city of Nara and shot the politician twice from a few meters away. The 67-year-old Abe died a little later in a hospital.

Originally, the assassin is said to have targeted the leader of a religious group. The Japanese had testified during an interrogation, the Japanese news agency Kyodo learned from investigators. According to the police, he had already told the police during the first interrogation that he was "dissatisfied" with Abe and wanted to kill him. He held a grudge against an organization that he believed had ties to Abe. What is meant is a religious group whose name is not yet known.

On the day of the attack, the police searched the perpetrator's apartment and seized several home-made firearms. The man was reportedly currently unemployed. By 2005, he is said to have served in the Navy for three years, where he was also trained in handguns. He was arrested immediately after the attack. The assassination had caused horror all over the world. Japan is considered one of the safest countries in the world and has extremely strict gun laws. The assassination happened shortly before elections to the upper house of the national parliament on Sunday. Despite the assassination, they should take place as planned, the government said.

Former Japanese president Shinzo Abe died this Friday a few hours after being shot while giving a speech in the city of Nara. Abe fell to the ground, unconscious, and was airlifted to the hospital, where he ultimately passed away. A man was arrested at the scene of the attack, identified as the assailant. He is a 41-year-old former member of the Japanese army. "It is a barbaric act at a time of elections, we can never ever forgive him," said the current Japanese Prime Minister, Fumio Kishida, who assured that he "lacked words" before the death of his "good friend" Abe.

The conservative leader, 67, and considered a fundamental figure in Japanese politics, was attacked in the middle of the street, near a train station in Nara (west of the country). He was shot at least twice, collapsed and started bleeding. The doctors who treated him confirmed that he had no vital signs when he was admitted and had two injuries to his neck. "He was bleeding profusely, he was extremely serious," they certified. Despite several blood transfusions, they were unable to save his life.

Confirmation of Abe's death has plunged the country into shock. The feeling is one of utter disbelief as everyone wonders what drove the assailant to commit the murder. Yamagami Tetsuya was arrested minutes after the attack. Currently unemployed, he worked for three years in the Maritime Self-Defense Forces, until 2005. Tetsuya, originally from Nara, was holding the gun with which he had shot. In his first statements in police custody, reported by the Japanese press, he has said that he "was dissatisfied with Abe and wanted to kill him." The police searched his home and found other devices such as guns and explosives.

Abe was attacked while campaigning for next Sunday's by-elections to the Upper House of the Diet (Japanese Parliament), in which Abe's Liberal Democratic Party (LDP) and current Prime Minister Kishida hoped to revalidate their majority.

A COUNTRY NO LONGER SO SAFE

Videos from the moment of the attack show Shinzo Abe standing on a stage when suddenly a bang is heard. Later, several members of security tackle a man. The prime minister was accompanied by a small team of guards but the attacker still managed to get within a few meters of his target. And it is that most political acts are held in Japan in public places and with few security measures due to the low crime rate in the country.

"This is extremely unusual in a country where gun violence is almost non-existent. If you look at the data from Japan's National Police Agency, in 2021 there were only a dozen firearm incidents and of those only one was a murder", explains Inés Arco, a researcher at CIDOB (Barcelona Center for International Affairs), specialized in East Asia and Chinese politics. A nation where, in addition, "the process to obtain a weapons license is subject to many controls," says Arco. People who want to buy one must pass numerous verifications and there are also several weapons that are directly prohibited. In the case of the shotgun used by Yamagami Tetsuya to kill Abe, it is believed to be "homemade" and had been made by himself, assembling various tubes.

Abe's murder is hardly unprecedented in a country where politicians, especially during the electoral campaign, play a role close to the voter, with acts without large displays and in which they usually shake hands with supporters. However, there is an event that now returns to memory. In 1960, the leader of the Socialist Party of Japan, Inejiro Asanuma, was assassinated during a debate by a young ultra-nationalist militant, only 17 years old, who attacked him with a samurai sword.

The death was televised live, as Asanuma was participating in a debate during the campaign for the elections to the House of Representatives. Those images went around the world and the photograph of the moment, taken by Yasuhi Nagao, was awarded the World Press Photo in 1960 and the Pulitzer a year later. Asanuma's assassin stabbed him several times before he was subdued and then arrested. He hanged himself several weeks later with a rope made from the bed sheets in his cell. The writer and Nobel Prize for Literature Kenzaburo Oe based on this story to write the short novel entitled "Seventeen".

But coming back to the present, the assassination of former Prime Minister Shinzo Abe has provoked a unanimous and worldwide reaction of consternation. The president of the European Commission, and the head of the European Council, Charles Michel, lamented the "brutal" and "cowardly" death of Shinzo Abe. US President Joe Biden condemned the killing and said he was "stunned, outraged and deeply saddened" by the news. In a statement issued by the White House, Biden assured that Abe's murder is "a tragedy for Japan and for all who knew him," and sent condolences to the former president's family. "As Japan's longest-serving prime minister, his vision of a free and open Indo-Pacific will endure. Above all, he cared deeply for the Japanese people and dedicated his life to serving them," he added.

"I am grieved beyond words by the tragic death of one of my dearest friends, Shinzo Abe," said Indian Prime Minister Narendra Modi, with whom the Japanese leader had a close relationship. Both met when the now Indian prime minister was head of government of the state of Gujarat (2001-2014). "His keen insights into economics and global affairs have always made a deep impression on me," Modi said.

Abe has been the prime minister of Japan with more years in the service of his country. He ruled in 2006 and then returned to power between 2012 and 2020. Hit by the harsh effects of the tsunami and the Fukushima nuclear disaster, in 2012 Japan found in Abe a leader who could move the country forward. He did it with his well-known "Abenomics" strategy, consisting of massive budgetary injections and profound structural changes.

The former prime minister, third generation of a family of politicians (his father was foreign minister and his grandfather was prime minister in the late 1950s), was a key figure on the world political scene during his tenure. His decline was closely related to the arrival of the coronavirus pandemic, which plunged Japan into a serious recession.