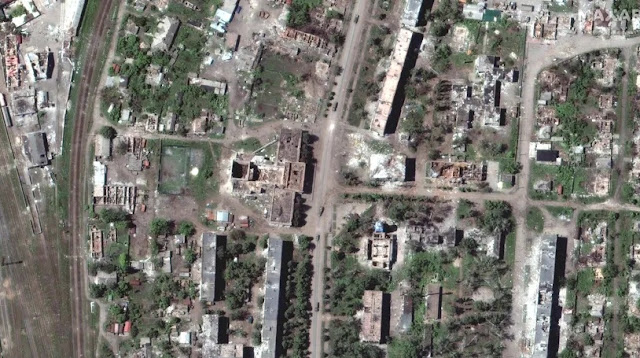 100 days after the Russian invasion of Ukraine, Ukrainian President Volodymyr Zelenskyy invoked the belief in victory among the citizens. There are three words his country is fighting for: peace, victory, Ukraine, Zelenskyy said in his evening video address. The picture was taken in the open air in front of his office in Kyiv.

"Exactly 100 days ago we woke up to a new reality," said the head of state. He described the experience of war using new words that Ukrainians should have learned. These included terrible words like rocket hits, ruins, deportation. Place names have been added, such as Hostomel, Bucha or Mariupol, the names of Russian, Ukrainian and foreign weapon systems.

Ukraine's chief negotiator Davyd Arakhamiya said representatives of his country would only sit down again at the negotiating table with Russia when their own military position was stronger. As long as there is heavy fighting in the east of the country, a break in negotiations would be better instead. There, in the city of Sieverodonetsk in the Donbass, Russian and Ukrainian soldiers continued to fight for every street. At the same time, according to the Ukrainian military, they observed a gathering of Russian troops who were apparently supposed to attack the city of Sloviansk.

Ukraine's ambassador in Ankara has accused Russia of "stealing" Ukrainian grain and mostly exporting it to Turkey. NATO member Turkey is trying to take a neutral position in the war. At the request of the UN, Turkey has offered to help secure maritime trade routes through which Ukrainian grain could be exported. Russian Foreign Minister Sergei Lavrov is due to visit Turkey on Wednesday to discuss the matter.

Negotiations will only take place when the situation on the battlefield changes and Russia no longer feels that it can dictate the terms, Podolyak said. He warned once againterritorial concessions to Russia. That will not end the war. “Because it is fundamental for the Russian Federation” – and Russian President Vladimir Putin said this several times – “that the mere existence of Ukrainian statehood is harmful.” The Russian advance is therefore less aimed at conquering specific areas than at destroying Ukraine itself.

Podoliak conceded that after a catastrophic early phase of the war for Russia, with up to 1,000 casualties per day, the current losses of Russian and Ukrainian troops are "comparable".. Ukrainian President Volodymyr Zelenskyy recently put his own losses at up to 100 dead and 500 injured every day. The information cannot be independently verified.

An Aeroflot airliner was supposed to be taking Russian tourists home but has been detained in Sri Lanka because of international sanctions against Russia. It is not allowed to leave the country until June 16.

On the 100th day of the war in Ukraine,  UN Secretary-General António Guterres renewed his appeal for an immediate end to the violence.

The UN speaks of constructive talks with Russia on the issue of food exports. The spokesman for the UN emergency aid coordinator, Martin Griffith, said against the background of the worsening food crisis.

Latvia's Prime Minister Krišjānis Kariņš has praised Germany's Ukraine policy. There are only deficits in the rhetoric of the federal government.

Switzerland has again emphasized its blocking stance on the export of Swiss arms to Ukraine via third countries . The Federal Council said that the delivery of ammunition and wheeled infantry fighting vehicles from Germany and Denmark to Ukraine could not be approved.

This will be important today:

Russian Foreign Minister Sergey Lavrov is expected to visit the Serbian capital Belgrade on Saturday. Serbia has close ties with Russia. For energy sources such as gas and oil, the Balkan country is heavily dependent on the eastern superpower. So far, it has not joined the EU sanctions against Russia.