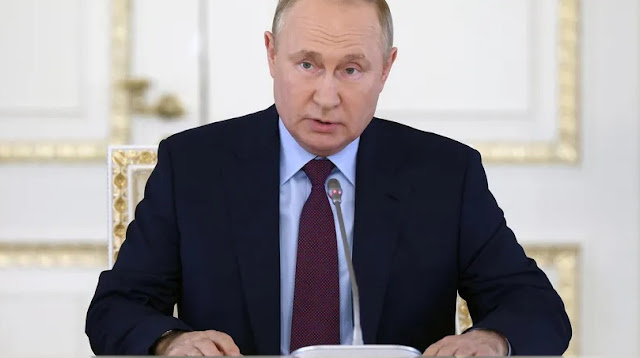 The Russian President sees his country on the road to economic success. The West is to blame for the global crises, also through its "unlawful sanctions".

At the start of the 25th International Economic Forum in St. Petersburg, Russia's President Vladimir Putin blamed western countries for global inflation, among other things. "Years of mistakes by Western countries in economic policy and the unlawful sanctions have led to a wave of global inflation, the destruction of usual supply and production chains and a sharp increase in poverty and food deficits," he wrote in a greeting to the Summit participants.

Putin again said Russia would not be swayed by EU and US sanctions. The situation offers new perspectives, said the Russian head of state, who is currently waging a war of aggression against Ukraine. Russia is economically on the road to success . The 2020s would come at a time of "consolidation of economic sovereignty".

"Delicious and period" instead of McDonald's

Recently, numerous Western companies, including German companies, had ended their business with and in Russia. Putin said other companies are filling in the gaps. After the departure of the US chain McDonald's, new burger restaurants were opened in the branches under the name Wkusno i Totschka - German: delicious and point. In Moscow, queues form at these places.

Under the motto "New World - New Opportunities", representatives from more than 100 countries are expected at this year's Economic Forum in St. Petersburg. In the record year 2020 there were 19,000 participants from 145 countries. A number of participants was not mentioned this time. Entrepreneurs can participate anonymously in the forum to avoid being penalized under Western sanctions.

According to media reports, participants from France, Italy, Canada and the USA are also registered.

Guests of honor this year include President Kassym-Jomart Tokayev of the authoritarian former Soviet Republic of Kazakhstan, the Taliban from Afghanistan  and the separatist leaders from the Luhansk and Donetsk People's Republics, which are recognized by Russia, and are being persecuted as terrorists. Egyptian President Abdel Fattah al-Sisi is said to be connected via video.