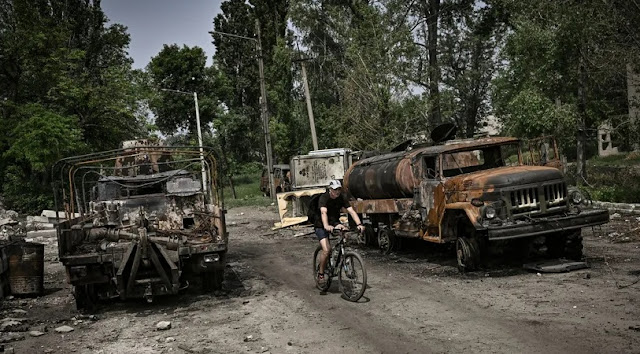 Ukraine is urging faster arms shipments from the west amid heavy fighting in the east. German armaments for 350 million euros.

Fighting continued in several regions while officials deployed by the Russian government in the occupied territories celebrated a Russian national holiday. According to the authorities, four people were injured in an explosion in the occupied city of Melitopol in the Zaporizhia region.

The occupation authorities assumed that an explosive device had detonated in a rubbish bin next to their local administration, the Russian news agency Tass reported. Only civilians were injured. The information could not be independently verified.

The Ukrainian Ambassador Andriy Melnyk is demanding concrete commitments for Chancellor Olaf Scholz 's apparently planned trip to Kiev. "We hope that during his visit to Kiev the chancellor will finally keep the German promises regarding arms deliveries and Ukraine's EU accession," he told Der Spiegel. To this day, the delivery of heavy weapons such as the Panzerhaubitze 2000 and the Gepard anti-aircraft tank is still awaited, said Melnyk. Announcements alone are no help against the invaders in war. It is therefore hoped that the chancellor will give him concrete dates as to when the weapons will arrive, "especially since the promises were made months ago." According to a media report, Scholz wantstravel to Kyiv later this month.

Since the beginning of the war, the federal government has approved the delivery of weapons and other armaments worth 350.1 million euros to Ukraine. This emerges from a response from the Federal Ministry of Economics and Climate Protection to a request from Left-wing MP Sevim Dağdelen, which the dpa news agency has received. These include weapons of war for 219.8 million euros and other armaments such as helmets and protective vests for 85.2 million euros.

Ukrainian President Volodymyr Zelenskyy has again demanded the delivery of modern air defense systems. In the embattled areas of eastern Ukraine, Russian troops continued to try to advance toward cities like Bakhmut, Slovyansk and Lysychansk, Zelenskyy said. In the strategically important city of Sievjerodonetsk there is " literally a fight for every meter". According to information from Saturday, Ukrainian troops controlled around a third of the city at the time.

Ukrainian army pushed out of center of Sieverodonetsk

The Ukrainian military has admitted that it has lost the center of the heavily contested city of Sieberodonetsk in the east of the country to Russian troops. The army shelled the city with artillery and drove out the Ukrainian soldiers, according to the Ukrainian General Staff. The fighting continued, however, it said.

Shortly before, President Volodymyr Zelenskyj had declared that in the strategically important Sievjerodonetsk there was "literally a fight for every meter". According to their own statements, Ukrainian troops still controlled around a third of the city on Saturday. The Azot chemical plant in Sievjerodonetsk was also shelled. According to Ukrainian sources, civilians are still hiding there. The information from the war zone cannot be independently verified at this time.

According to the Ukrainian Ambassador Andriy Melnyk, many Ukrainian refugees are turning their backs on Germany because they do not feel welcome. Melnyk tells the Bild-TV broadcaster: "Most Ukrainians have been returning for a long time. There are more people leaving this country than coming to you." In Germany, people should think about why so many Ukrainians "don't want to stay here."

Kiev Mayor Vitali Klitschko is convinced that Russian President Vladimir Putin still wants to conquer the country's capital. " Kiev was a goal and Kiev remains a goal ," Klitschko told Bild-TV. Putin says that he claims all of the former Russian territory. "His interest doesn't end in Kyiv and on the border with Poland either. He will go as far as we allow him to."

In occupied Mariupol , a new city coat of arms in the colors of the Russian flag was unveiled in the outlying areas on the occasion of the Russian national holiday, and Russia's national flags also waved on a highway leading to Mariupol.

Unknown hackers placed a message against the war in Ukraine on Russian state television websites. On the streaming portal Smotrim.ru, for example, "Putin destroys Russians and Ukrainians! Stop the war!", as numerous users reported on Sunday evening, next to photos of destruction in Ukraine.