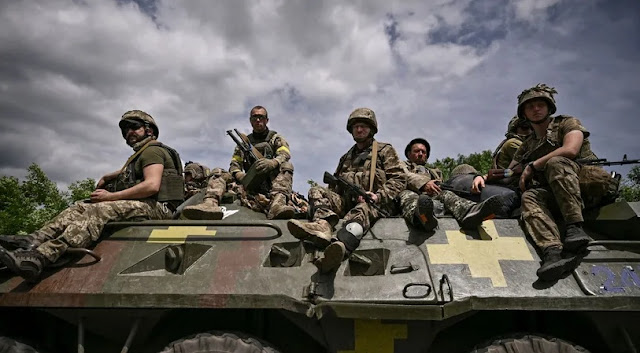 According to Ukrainian information, Russia has attacked important rail connections in the Lviv region. Russian troops are advancing in Sievjerodonetsk.

According to the regional governor, five people were injured in a Russian rocket attack on a railway line in the western Ukrainian region of Lviv. Anton Gerashchenko, an adviser at Ukraine's Interior Ministry, said Russian troops struck the Beskyd railway tunnel in the Carpathian Mountains, apparently to cut a vital rail link and cut off shipments of arms and fuel. The head of the Ukrainian railways announced that damage to the railway line was still being examined. The tunnel itself was spared.

The Ukrainian military reported that Russian troops had "partially succeeded" in fighting in the embattled city of Sievarodonetsk in the Luhansk region in eastern Ukraine. Russian troops are in control of the eastern part of the city, the General Staff said. The storm on the big city continues.

In her first public speech in around six months, former Chancellor Angela Merkel described the Russian attack on Ukraine as a "profound caesura". As the off-duty Chancellor, she does not want to make any assessments from the sidelines, Merkel said in Berlin. But Russia's invasion of its neighboring country marked too much a blatant breach of international law in the history of Europe after the end of the Second World War. "My solidarity goes to Ukraine, which was attacked and invaded by Russia, and to supporting their right to self-defense," said Merkel.

Several Ukrainian regions reported air and rocket attacks on Thursday night and early in the morning. "Four enemy cruise missiles were fired. They were shot down from the Black Sea," confirmed the head of the military administration in western Ukraine's Lviv, Maxym Kosytzky, on his Telegram channel. The night rocket attack was therefore aimed at railway objects in the districts of Stryi and Sambir. Explosions were also heard in the port city of Odessa in the morning.

Kosytzkyj initially reported five injuries. The authorities in Odessa have not yet provided any information on this. The spokesman for the regional military administration, Serhiy Brachuk, confirmed an air alert, but at the same time warned local media against publishing damage reports before public announcements.

The governor of the Sumy region, Dmitro Shyvytskyi, announced on his Telegram channel that rocket fire in Krasnopilya district completely destroyed a residential building and injured three people. According to Governor Oleh Synehubov, a woman was killed and another injured in the neighboring Kharkiv region. The night shelling hit a school in the Saltivka district of Kharkiv.

The US government wants to provide Ukraine with a total of four multiple rocket launchers. As the US Department of Defense announced, the new weapons package for the government in Kiev should also  include a further 1,000 Javelin anti-tank missiles  and four Mi-17 helicopters.

The Ukrainian Ambassador to Germany, Andriy Melnyk, is positive about the delivery of the Iris-T air defense system promised by Chancellor Olaf Scholz (SPD): " We need more systems like this to defend cities and infrastructure."

At least 689 children have been harmed in nearly 100 days of Russia's war of aggression in Ukraine, according to President Volodymyr Zelenskyy. 243 children were killed, said Zelenskyj in his video address.

The Polish government pledged further aid to Ukraine during a visit by Prime Minister Mateusz Morawiecki to Kiev . "Polish companies will take part in the reconstruction," said Morawiecki.

The new EU sanctions package against Russia can not come into force due to another objection from Hungary . The government in Budapest is demanding that the planned punitive measures against Patriarch Kirill, the head of the Russian Orthodox Church, be scrapped.

After Turkish President Recep Tayyip Erdoğan confirmed his reservations about admitting Sweden and Finland to NATO, high-ranking  representatives of the three countries are to meet for talks in the coming days.