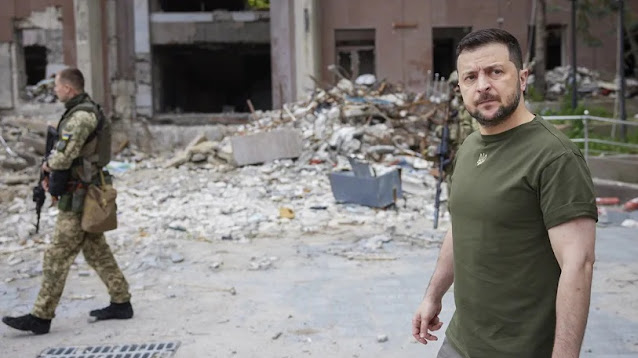 NATO Secretary General Jens Stoltenberg and British Prime Minister Boris Johnson have called on Ukraine 's allies not to let up in supporting the country against Russia's war of aggression. In an op-ed for The Sunday Times newspaper, Johnson wrote that Kiev's supporters must ensure that Ukraine "has the strategic endurance to survive and eventually win". Stoltenberg told Bild am Sonntag that the war could last for years.

"We must not let up in supporting Ukraine," Stoltenberg said. Rising energy and food prices as a result of the Russian war of aggression are "no comparison to the price that the Ukrainians have to pay every day with many lives". If Russian President Vladimir Putin learns from the war "that he can simply carry on as he did after the 2008 war in Georgia and the occupation of Crimea in 2014," then the NATO states would pay "a much higher price."

However, Stoltenberg also said that the western defense alliance would not intervene in the fighting. "We are helping the country, but we will not send NATO soldiers to Ukraine," he said. British Prime Minister Johnson wrote in his article that "time is now the decisive factor". Everything will now depend on "whether Ukraine strengthens its defense capability faster than Russia renews its attack capability." It is the task of the allies to "ensure that time plays for Ukraine".

In his contribution, Johnson formulated a four-point plan for "sustainable financial and technical assistance" for Ukraine. Parts of it should be kept "for the coming years" and possibly strengthened. Johnson expressly warned against permanently accepting Russian territorial gains in Ukraine. Allowing Russian President Vladimir Putin to do this will not make the world more peaceful. Johnson wrote verbatim: "Such a farce would be the greatest victory for an aggressor in Europe since the Second World War."

On Saturday, Ukrainian President Volodymyr Zelenskyy visited the front line in southern Ukraine for the first time since the Russian war of aggression began . An official video showed Zelenskyy inspecting a badly damaged regional administration building in the strategically important city of Mykolaiv. The capture of the city would open the way to Odessa, the main Ukrainian port city.

Fighting continued unabated in eastern Ukraine's Donbass. The governor of the Luhansk sub-region, Serhiy Hajday, warned of a further escalation of the Russian warfare in the region. "It's good that the West is helping us, but it's too late," Hajdaj told the AFP news agency in an interview. In view of the Russian attacks, there are "no longer any safe places" in the Luhansk region.

Hajdaj demanded that Western states supply "long-range" weapons that "must arrive quickly" . NATO boss Stoltenberg also expects that further deliveries of weapons from the West could decisively change the course of the war . He told Bild am Sonntag that more "modern weapons" would increase the likelihood "that Ukraine can drive Putin's troops out of the Donbass again."

Ukrainian forces have apparently repulsed Russian troops near the town of Krasnopillya. The Russian soldiers were on a reconnaissance mission, the Ukrainian general staff reported. They would have suffered heavy casualties.

Ukrainian authorities report that the Russian army shelled locations in the Poltava and Dnipropetrovsk regions.

The more than 500 civilians in the Azot chemical plant in the embattled city of Sievjerodonetsk do not want to be evacuated, according to the regional leadership. The Russian side offered them an escape corridor, but only to Russian-controlled territory.