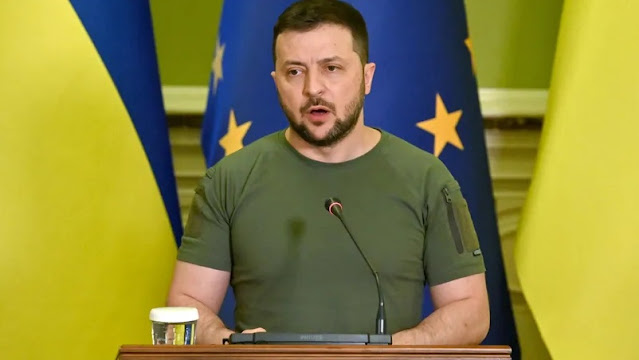 Ukrainian President Volodymyr Zelenskyj has once again addressed critical words to German Chancellor Olaf Scholz. In an interview in the ZDF -heute-journal, he said that the German government "must make a decision: a balancing act must not be attempted between Ukraine and relations with Russia. " Germany needs the "security that Germany will support Ukraine."

Zelenskyj also criticized the fact that Germany started supplying arms to Ukraine later than other countries. There was political and rhetorical support from Germany and France, "but at the beginning of the war we didn't need politics, we needed help," he said.

Scholz rejected the accusation that he was too hesitant to deliver weapons that had already been promised. The training of Ukrainian soldiers on the sometimes very modern and complicated weapon systems is ongoing. "It's about really heavy equipment. You have to be able to use it, you have to be trained for it, that's currently taking place in the Federal Republic of Germany," said Scholz in Greifswald. "We will deliver all the weapons that we have launched. Russia cannot, must not and will not win this war," said the SPD politician. It also supports the EU and NATO partner Slovakia in defending the airspace. Germany will defend "every square centimeter" of NATO territory, said Scholz.

He now hopes that the chancellor will personally support Ukraine's EU membership, Zelensky said. He expects the status of a candidate for accession to the European Union before the end of this month. He is not prepared to compromise or even cede territory to Russia, said the President. Peace talks can only be held "if the other side is willing to put an end to the war. We have no time for talks that are useless."

In his evening video address, the President promised a reconquest of the territories occupied by Russia. "The Ukrainian flag will again fly over Yalta and Sudak, over Dzhankoy and Yevpatoria. Of course, we will also liberate our Crimea," Zelenskyy said. The battle for the eastern Donbass will go down as one of the most brutal in European history. "For us, the price of this battle is very high. It's just scary," said Zelenskyy. His adviser Mykhailo Podoliak said Ukraine needs 1,000 howitzers, 500 tanks and 1,000 drones, as well as other heavy weapons.

The city of Sievjerodonetsk in eastern Ukraine, which has been fought over for weeks, is almost completely surrounded by Russian troops. The third and final bridge over the Seversky Donets River was destroyed, according to Ukrainian sources. The governor of the Luhansk region, Serhiy Hajday, told Radio Free Europe/Radio Liberty: "Unfortunately, it is now completely impossible to drive into the city or deliver anything to the city. Evacuation is impossible ". The Ukrainian military only has limited access to the city. The situation of the Ukrainian troops is "difficult but under control" even though 70 percent of the city is controlled by Russia, Hajdaj said. "You have the ability to take wounded to hospitals." The information could not be independently verified.

Meanwhile, pro-Russian separatists in eastern Ukraine reported several dead from "massive" Ukrainian shelling of the city of Donetsk. "Four people were killed, including a child, and 22 other civilians were injured in the bombardments," the authorities of the self-proclaimed Donetsk People's Republic said. The Ukrainian army fired on the city "with unprecedented strength, intensity and duration". According to the information, within two hours " almost 300 rockets and artillery shells" fell on Donetsk.

The information could not be independently verified. Donetsk separatist leader Denis Pushilin accused Ukrainian troops of "bombing residential areas" "" Additional allied forces, including those from the Russian Federation, would now have to be mobilized" to defend Donetsk.

Russia reports shelling of a Ukrainian arms depot in Donetsk

According to the Russian military, it has destroyed a large number of arms delivered to Ukraine from abroad . Precision missiles hit a supply depot near the Udachna railway station in the Donetsk region of eastern Ukraine, Russian Defense Ministry spokesman Igor Konashenkov said.

In addition, a "deployment site for foreign mercenaries" and a Ukrainian radar station for the Buk-M1 anti-aircraft missile system in the neighboring Luhansk region were hit. Konashenkov further indicated that two batteries of multiple rocket launcher systemsin Luhansk and Kharkiv were destroyed. The information cannot be independently verified.

Slovakia wants to help Ukraine to become a member of the EU. Ukraine should be given a team to help implement the necessary reforms, said Slovakian Prime Minister Eduard Heger after talks with German Chancellor Olaf Scholz. At the same time, Heger emphasized that there should be no shortcut to EU accession for Ukraine.

According to Scholz, Ukraine sent a strong pro-European signal with its application for membership . By the end of the week, the EU Commission intends to present a proposal on whether Ukraine should officially receive candidate status. Then the 27 EU countries have to decide.

As a result of the war, around a quarter fewer fields were tilled in Ukraine than usual. That's what Ukrainian Deputy Minister of Agriculture Taras Vysotskyi said in Kyiv. He predicted that the harvest would be sufficient for personal use, especially as this had fallen due to the flight of many people.