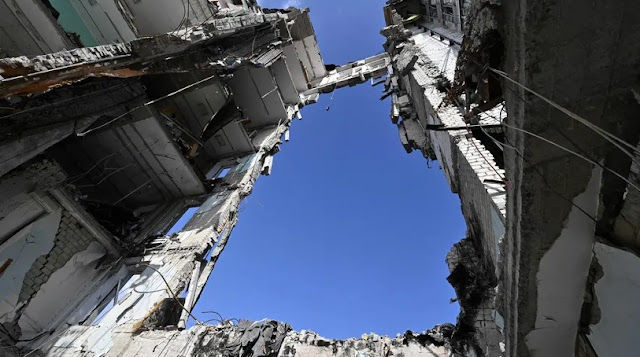 Ukrainian President Volodymyr Zelenskyy has appealed to the West to continue sending his country heavy weapons and ammunition. Ukraine is doing everything to stop the Russian attacks, but is dependent on Western arms supplies. In his nightly video address, he warned that Russia intends to destroy every single city in eastern Ukraine's Donbass region.

His adviser Oleksiy Arestovych sent a similar message to the West in a YouTube video. According to this, Ukraine needs, among other things, more artillery firepower quickly in order to repel the Russian military in the east of the country. The Ukrainian government is very grateful for the help so far. But he doesn't understand the slowness of the deliveries.

Heavy fighting in Sievjerodonetsk and Cherson

Heavy fighting continued throughout the night in eastern Donbass, particularly in Sieverodonetsk in the Luhansk region. In the southern region of Cherson, which has been almost completely controlled by Russian troops since the first days of the war, the Ukrainian army says it has attacked Russian military positions.

Ukraine fears that the Russian government could soon hold a referendum there on union with Russia. According to Russian authorities, Russian passports are already being distributed to Ukrainians in several occupied areas in the east. In addition, the Russian occupiers in some areas introduced the ruble as official currency.

The mayor of the badly damaged, Russian-held port city of Mariupol in southern Ukraine has asked the United Nations and the International Red Cross for help. They should help set up a humanitarian escape corridor for the remaining civilians. In the meantime, cholera has broken out in the city.

The Russian central bank is dampening hopes in the West that sanctions will quickly weaken Russia's economy. So far, the consequences are less acute than expected, says the President of the Russian Central Bank, Elwira Nabiullina.

According to Russian state media, Russian occupiers in Ukraine are using "sophisticated methods" to circumvent western sanctions on grain exports. As the Russian agency Ria reports, the occupiers are able to sell grain to North America, the Middle East and Africa, despite international punitive measures.

Russia has to give up a seat on the United Nations Economic and Social Council (Ecosoc) that it believed to be secure . In the UN General Assembly in New York, Russia failed to achieve the required two-thirds majority in six election rounds, and a seventh round of elections is not scheduled to take place until next week. According to diplomats, Russia has been punished for its war of aggression in Ukraine.

The heavy fighting for the industrial city of Sievjerodonetsk continues. "This is now an artillery war," Vadym Skibitskyj, the deputy head of Ukraine's military intelligence agency HUR, told the British newspaper The Guardian. Everything now depends on what and how many weapons Western Ukraine will deliver. According to this, Ukraine has one artillery piece against 10 to 15 Russian artillery pieces.

About 10,000 soldiers of the Ukrainian army have died since the beginning of the Russian war of aggression. This is reported by Oleksiy Arestovych, an adviser to President Volodymyr Zelenskyy, in a YouTube video interview. A few days earlier, Ukrainian Defense Minister Oleksiy Reznikov announced that up to 100 Ukrainian soldiers were being killed every day. Advisor Arestovych confirmed that already at the beginning of the war a corresponding number of Ukrainian soldiers were dying per day.

When Feygin asked if one could assume that around 10,000 soldiers were killed in total, he replied: "Yes, roughly." It is unclear how many people have actually died so far in the war that has been ongoing since February 24. Neither Ukraine nor Russia have made any clear statements about the losses. According to Arestovych, more Russian than Ukrainian soldiers are constantly being killed. He gave an estimate that around 600 Russian soldiers were killed in Ukraine on Friday alone. The information cannot be independently verified.