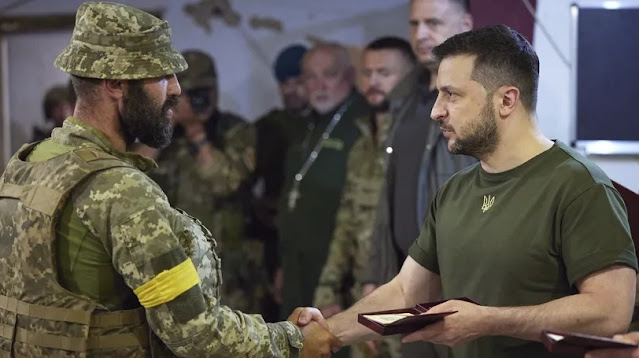 Both the Russian army and the Ukrainian military have reported successes. The Ukrainian armed forces said they had succeeded in pushing back the Russians around Sievjerodonetsk. In a post on the online network Facebook, they also referred to a success in the Toshkivka area.

The Russian Defense Ministry said it had launched rocket attacks at a meeting of senior Ukrainian military officials, killing "more than 50 generals and officers". In addition, a building in which weapons supplied by the West were stored, including ten howitzers and around 20 armored vehicles, was destroyed by Russian shelling in the city of Mikolajiv. The information has not been independently verified. The fighting continues with full intensity, especially in the eastern Ukrainian Donbass.

Ukrainian President Volodymyr Zelenskyy expects increased attacks by the Russian military this week- in response to the deliberations of the 27 EU heads of state and government at a summit on Thursday and Friday. It is about a membership application from Ukraine."This week we should expect Russia to intensify its hostile activities. We are preparing. We are ready," said Zelenskyy. Ukrainian President Zelenskyy reiterated the importance of the pending decision by EU member states on his country's possible candidate status. Few decisions have ever been "so fateful for Ukraine," Zelensky said. "Only a positive decision is in the interest of all of Europe."

According to British secret service experts, Russia's difficulties with its advance in the Ukraine are also due to the weaknesses of its air force. It is very likely that these are one of the most important factors behind the very limited Russian successes, according to an update from the British Ministry of Defense. So far, the air forces have tended to avoid risks in their maneuvers and have not been able to achieve air supremacy. This has increased the pressure on the Russian ground forces, which are now increasingly exhausted.

According to the British, the Russians have combat-capable aircraft, but they arenot adequately trained for modern Luftwaffe operations. For years, Russian air force training was said to have focused more on impressing high-ranking military officials than on training dynamic deployment scenarios for different troops.  Since the start of the Russian war of aggression around four months ago, the British government has regularly published intelligence information on the course. The government in Moscow accuses Great Britain of a targeted disinformation campaign.

The head of the European People's Party in the European Parliament, Manfred Weber, is clearly calling for Ukraine's EU candidate status: the heads of state and government of the European Union should vote unanimously in the affirmative at their summit. The candidate status is an important "booster" for Ukraine in the current war situation, Weber told Deutschlandfunk. The enlargement of the EU is no longer just an economic question for Europe, but a matter of values ​​and security policy.

The CSU politician appealed to Chancellor Olaf Scholz and French President Emmanuel Macron to show political leadership nowand to use their influence for a unanimous decision at the EU summit on Thursday and Friday in Brussels. The EU foreign ministers are already discussing the EU Commission's recommendation in Luxembourg today. Another issue is military aid to the country.

One injured, one damaged power station: Russia reports Ukrainian shelling near the border. According to the authorities, one person was injured in the village of Bryansk. In addition, a power plant was damaged in the village of Susemka, said Governor Alexander Bogomas. The information has not been independently verified.

Russia has deployed an air defense division and up to three tactical battalions to Bryansk and the neighboring Kursk region, the Ukrainian General Staff said. The Russian authorities in the border regions have repeatedly accused Ukraine of shelling residential areas in recent weeks.

Russia exported a record amount of oil to China in May and is now the largest supplier of the raw material to the People's Republic. Almost 8.42 million tons of crude oil from Russia were brought in, according to the Chinese customs authority. That's almost two million barrels a day and 55 percent more than a year ago and about a quarter more than in April. Previously, Saudi Arabia was China's largest supplier.

Chinese companies such as the refinery giant Sinopec are benefiting from price reductions after western oil companies and trading houses withdrew from the Russian market due to sanctions imposed because of the Ukraine war.

In the event of an end to Western arms supplies, Ukraine would still continue the fight against Russia. "If we don't get weapons, okay, then we will fight with shovels, but we will defend ourselves because this war is a war for our existence," Ukrainian Foreign Minister Dmytro Kuleba said on the ARD program Anne Will.

In the EU and especially in Germany, significantly more assets have been confiscated in recent months on the basis of the sanctions against Russian oligarchs . The value of frozen assets has "almost doubled from 6.7 billion euros in April to currently just over 12.5 billion euros," a spokesman for the EU Commission told the newspaper Welt.

Russia is said to have used 210 types of ammunition in Ukraine that are banned by international agreements. This was reported by the New York Times, which is based on forensic evaluations. According to the newspaper's research, much of the more than 2,000 munitions that Russia has fired in Ukraine since the start of the war were unguided. This means that Russia can no longer determine the point of impact of the missiles after they have been dropped or fired - and therefore cannot precisely check whether civilians are hit.