Russia-Ukraine Conflict: Situation In Ukraine—"Even Untrained Forces Must Now Go To The Front" 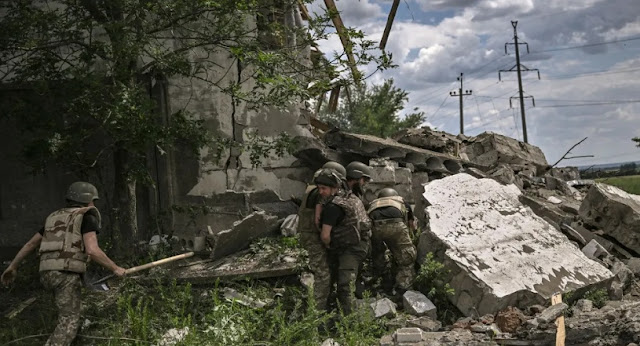 The situation of the Ukrainian armed forces in Donbass is deteriorating. With a dominant artillery and new material, Russia gains the upper hand.

Long columns of trains with Russian main battle tanks and anti-aircraft systems are moving in the direction of the Ukrainian border : Videos on social networks have shown for days that the Russian army is bringing large quantities of unused material to Russia's Volgograd, not far from the combat zone in Donbass. Military expert Rob Lee has identified in the images lightly armored transporters from the 1960s, anti-aircraft tanks, mine clearance vehicles, surface-to-air missile systems developed in the 1970s, and infantry fighting vehicles from the 1980s.

The equipment is not new, but is being brought in in large quantities and should soon be used against the Ukrainians. "The Russian troops have concentrated the majority of their active reserves in the Donbass and are now concentrating their firepower on smaller areas in order to achieve a high level of local superiority," says Wolfgang Richter from the German Institute for International and Security Affairs (SWP) on the current situation. "They seem to be succeeding now. Russian artillery superiority on the ground is very high." In this way, the Russian troops could slowly but steadily work their way forward in small steps. However, like the Ukrainians, they suffered very high losses.

In the Donbass, the Russians have been relying on heavy artillery shelling for weeks . They want to use it to wear down the defenders and blast breaches in enemy positions so tank formations can push through and gain terrain. "I hear from the front line how difficult the situation is for the defenders. Ukraine can hardly respond to the constant shelling of Russian artillery," says Andreas Umland from the Stockholm Center for East European Studies.

Not only soldiers are affected, but also the civilian population. "The forces are very unequally distributed, Russia has around ten times more artillery than the defenders," says Martin Schulze Wessel, professor of the history of Eastern and Southeastern Europe at the Ludwig Maximilian University in Munich. Russian warfare is systematically aimed at shelling civilian targets. "It's not about the so-called collateral damage of military warfare, but about intention," says Wessel. Cities would be destroyed with grenades, bombs and rockets before being taken. The civilian population's escape routes would also be targeted and shelters destroyed.

This is also the current situation in the region around Sievjerodonetsk, a city in the Donbass that has been fought over for weeks. According to the Ukrainian military command, intense fighting is taking place in the villages around the administrative center, but the defenders in the city also continue to be under constant fire. Russia has increased artillery use and used more troops to reinforce the offensive, Ukraine's President Volodymyr Zelenskyy said in a video message.

"The local Ukrainian units are defending every square meter tenaciously, but they are partially surrounded and it is becoming increasingly difficult to supply them," says Richter from the SWP, a former colonel in the German army. It can be assumed that they will increasingly have to give up terrain and retreat to rear defensive positions. "It seems that they are trying to slow down the advance of the Russian troops and increase their losses for slow territorial gains. Then only local tactical successes would be possible for the Russian side, but a larger operational breakthrough in the direction of Sloviansk and Kramatorsk unlikely, at least in the short term."

Umland notes that the Ukrainian armed forces are having to withdraw again and again at the moment. "The Russian superiority is overwhelming. Even untrained, lightly armed forces now have to be sent to the front because the regular army is so thin. This is by far the phase of the war with the most losses for the Ukrainian army." It is true that Russia still fails to make large gains in territory. But at the moment the government in Moscow is more successful in sending fresh forces into the fighting in the Donbass than its opponents.

How tough the fighting is in eastern Ukraine is shown not only by the alarmingly high number of casualties on the part of the defenders, but also by the government's appeals in Kiev for more ammunition deliveries. In fact, the Ukrainian armed forces seem to be running out of shells for their Soviet-made heavy artillery. With airstrikes, rocket fire and artillery fire, the Russian attackers have destroyed many armaments factories in Ukraine. The attacked country is increasingly dependent on weapons and ammunition from the West.

"The NATO countries should deliver more heavy weapons, which I think is necessary to enable Ukraine to inflict such losses on Russia that the government in Moscow is forced to make peace," says Schulze Wessel. As long as Putin has hope of being able to achieve military success, there will be no ceasefire.

The United States has already reacted to this and again announced that it would deliver large quantities of material. Among them are 36,000 rounds of ammunition for howitzers in NATO caliber 155 millimeters, of which the USA wants to provide a total of almost 130 guns, as the specialist medium Defense News writes.

In the east, Ukraine is not succeeding in regaining lost territory

With the arms deliveries from the West, Ukraine wants to replace the war equipment lost to Russian attacks. "The high level of Ukrainian material losses seems to be particularly serious in terms of artillery. This suggests that the Russian leadership now has a better understanding of linking target reconnaissance with rapid and precise fire and airstrikes," says Wolfgang Richter from the SWP. In addition, because of the high personnel losses of the Ukrainians, their combat effectiveness on the ground is also decreasing. "Above all, they should no longer be in a position to form larger tactical reserves and move them around safely without becoming the target of Russian artillery strikes and air raids," says Richter.

At the moment, Ukraine is not succeeding in regaining lost territory in the east. As long as this does not happen, the government in Kyiv does not want to negotiate with the Kremlin. "If Russia's losses continue to rise, the rulers in Russia could find themselves forced to seek a political solution and strive for a ceasefire," says Eastern Europe expert Andreas Umland. The demand that Russia must be defeated is correct insofar as the Kremlin is currently only impressed by strength. "And only through Ukrainian successes is an end to the war imaginable."

Umland, who lived and researched in Kiev before the war, describes how difficult it will be to end the ongoing conflict. "The territory conquered by the Russian armed forces could be written off for a few years, but it's not just about land, it's about the people. The occupation regime that Russia is establishing is really terroristic and inhuman," says the expert. "Torture, rape and radical exploitation occur. That's why Ukraine cannot accept that national territory is voluntarily given up. No Ukrainian politician can represent that domestically." And Putin is very unlikely to give back Crimea or the Donetsk and Luhansk oblasts.

At least Russian politicians have already announced that they want to permanently tie the Donbass to their country. "Russia's intention to go to war is not to liberate anyone or to denazify Ukraine, but to destroy the country. The real goal is the de-Ukrainization of Ukraine. Putin wants to completely break the political will and independence of Ukraine, destroy the national culture", says Schulze Wessel. "This war has the character of a deliberate genocide. The Russians abducted a million people from the occupied Ukrainian territories to Russia, including hundreds of thousands of children. This war is not just about the annexation of land, that's what makes the situation so fatal."