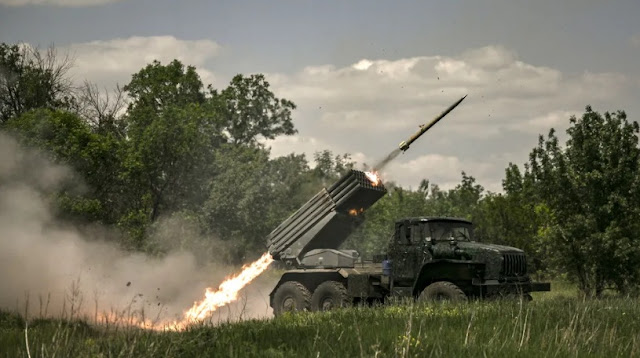 Volodymyr Zelenskyj describes the EU candidate status as historic. The Russian army is advancing in Luhansk. The US promises more weapons.

Ukraine is now a new candidate for EU membership – President Volodymyr Zelenskyj recognized his country's candidate status as a historic moment. "The future of Ukraine lies in the EU," he said after the decision of the EU heads of state and government at the Brussels summit. At the same time, this is currently the largest possible step to strengthen Europe, "while the Russian war is testing our ability to maintain freedom and unity."

Selenskyj had campaigned massively for the prospect of accession in the past few months. Now, in his daily video address , he reiterated that Ukraine is capable of becoming a full EU member.

At the same time, the military situation in the eastern Luhansk region is becoming increasingly difficult for the Ukrainian army. Russian troops are fighting and trying to encircle the strategically important city of Lysychansk ; According to Ukrainian sources, they had already advanced to the outskirts of the city. "Our fighters stopped the advance towards the southern outskirts of Lysychansk, inflicted casualties on the enemy and forced them to retreat," said the General Staff situation report in Kyiv on Thursday evening. The Russian army is now drawing on reserves. Lysychansk is the last major city in the Luhansk Oblast under full Ukrainian control.

Meanwhile, the US announced another $450 million in arms sales to Ukraine. They also included multiple rocket launcher artillery systems and patrol boats, said a senior White House official, John Kirby. According to its own statements, the USA has promised or already delivered weapons and equipment worth around 6.1 billion dollars to the country attacked by Russia in the four months of the war.

After weeks of resistance against the Russian attackers, the Ukrainian troops are leaving the city of Sieveyerodonetsk. Serhiy Hajday, governor of the eastern Ukrainian region of Luhansk, told the Telegram news service that the army would have to withdraw from the city. The Russian units had recently taken the city almost completely.

More news from the night in brief:

Prime Minister Boris Johnson has signaled that Britain would help Ukraine clear the sea mines off the coast. Johnson said he didn't want to give any technical or military details. However, from the measures that have already been taken, it can be concluded "that we are definitely talking to them on a technical level to help with demining near Odessa."

US President Joe Biden is traveling to the G7 summit this Saturday, which will take place from Sunday to Tuesday at Schloss Elmau in Bavaria.

Kirby cited the goals of the summit as "further isolating Russia from the global economy, targeting Russia's defense supply chain, and continuing to counteract the circumvention of these unprecedented sanctions. " After the G7 meeting, Biden travels to the NATO summit in Madrid. There, too, the Ukraine war will be the focus.