Russia-Ukraine Conflict: Situation In Ukraine—Zelenskyj Calls The Situation In The East Difficult, Ten Missiles On Mikolayiv 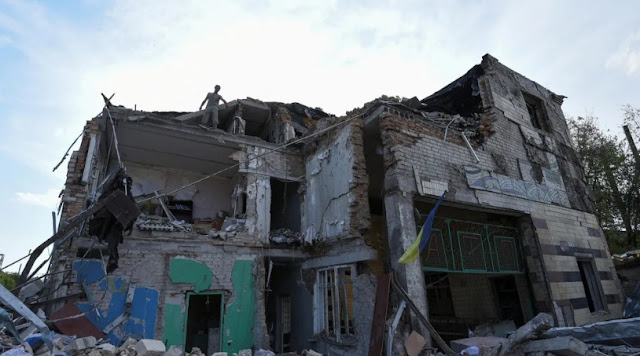 The pressure on Russia is not enough, says Zelenskyj. Heavy fighting is reported from the Donbass. Putin considers the course of the war to be "according to plan".

According to Volodymyr Zelenskyy, the situation of Ukrainian troops in the heavily contested areas in the east of the country remains extremely difficult despite Western arms deliveries. "We are doing everything we can to equip our military with modern artillery systems and to respond appropriately to the occupiers," said the Ukrainian president in his video address that night. Meanwhile, Russian President Vladimir Putin has threatened countermeasures after Finland and Sweden plan to join NATO. He again claimed that the fighting in Ukraine was going according to plan.

Vladimir Putin: "Everything is going according to plan"

During a visit to Turkmenistan, the Russian President again claimed that hostilities are going according to plan. "The work is quiet, rhythmic, the troops are moving and reaching the lines that have been set for them as milestones," Putin told Russian journalists in the Turkmen capital of Ashgabat. "Everything is going according to plan," he was quoted as saying by the Russian news agency Tass.

Russian troops are currently attacking the hard coal and industrial area of ​​Donbass in eastern Ukraine . According to Western experts, the Russian military is advancing, but suffering heavy casualties and rapidly depleting its stocks of artillery shells.

In addition,Putin did not say in Turkmenistan how long the hostilities could continue. "It would be wrong to set any deadlines," he said. Ukrainian and international experts have documented numerous cases of violence against civilians by Russian soldiers, such as the killing of residents in the Kiev suburb of Bucha. Russia claims the atrocities are staged.

The Russian military relies on massive artillery fire in the Donbass. Ukrainian artillery is defeated there, although some modern guns are arriving from the west. Fighting continued for the city of Lysychansk, Ukrainian troops withdrew from neighboring Sievjerodonetsk.

The previous pressure on Russia is not enough, said Zelenskyj at night. On Wednesday alone, ten Russian rockets were fired at the Ukrainian city of Mikolajiv. "All were aimed at civilian targets," he said.

According to their own statements, the Ukrainian army and the Russian side exchanged a total of almost 300 prisoners. 144 people returned to Ukraine, said Zelenskyy. The oldest is 65 years old and the youngest 19. Among the released Ukrainian soldiers are 95 fighters who, until a few weeks ago, were defending the hard-fought Azov steel works in the port city of Mariupol, which has since been conquered by the Russians. According to Ukrainian data, it was the largest exchange of prisoners since the beginning of the war. The separatist leader Denis Puschilin also spoke of 144 pro-Russian and Russian fighters who had been released from Ukrainian captivity.

Amnesty International has classified the air strike on the Mariupol theater in March as a war crime by Russian forces. The human rights organization collected evidence for a good three months and has now presented a report on it. "The attack on the theater in Mariupol is a war crime by Russian troops," said Julia Duchrow of Amnesty International Germany. Most likely, two 500-kilo bombs were dropped. Residents of the embattled Ukrainian port city had sought shelter in the theater.

After Russia's close ally Syria recognized the two eastern Ukrainian separatist regions of Luhansk and Donetsk as independent states, Zelenskyi wants to cut all ties with the country. Russia "squeezed" this out of Syria, he said. Syria was the first country after Russia to recognize the separatist areas as states. Next to Iran, Moscow is the closest ally of the leadership in Damascus in the Syrian civil war.