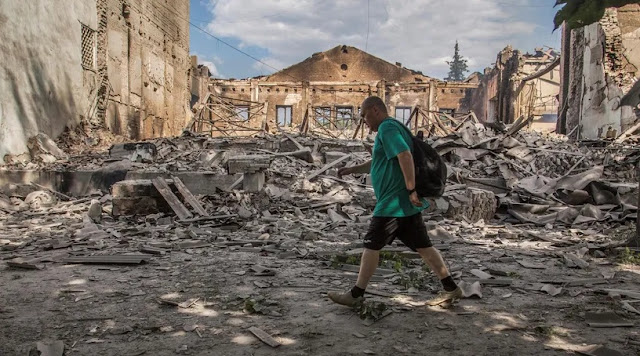 British intelligence experts fear that the strategically important city will fall to the Russians. Poland wants to cut technology exports to Russia.

Ukrainian troops continue to try to push back fierce Russian attacks in eastern Ukraine's Donbass region. According to the Ukrainian armed forces, Russian fighters have advanced far beyond the city of Izyum into the Donbass region. However, the Ukrainian army managed to recapture the village of Dmytrivka near Izyum in the Kharkiv region. The information cannot be independently verified.

Analysts at the US Institute for War Studies confirm that the Ukrainian military has recently launched a number of successful counterattacks. British intelligence experts, however, are looking at the situation in the strategically important city of Sieverodonetsk. This could therefore soon be completely encircled by the Russians. The city and its surroundings are under heavy artillery fire, the Ukrainian army said. Every street in Sievjerodonetsk is contested.

The Azot chemical factory, where soldiers and hundreds of civilians are said to be holding out, is almost completely destroyed. Overall, Ukrainian troops are suffering high material losses in the war, said a senior general in the country. "To date, as a result of active fighting, we have an estimated 30 to 40, sometimes up to 50 percent equipment losses," Brigadier General Volodymyr Karpenko told the US magazine National Defense.

The Russian state broadcaster RT has published videos of two US citizens missing in Ukraine. An RT journalist published a video on Friday evening in the Messenger service Telegram, in which two US veterans can be seen. One of them claims that they took part in battles with Russian troops in the Kharkiv region of Ukraine.

The Kremlin-affiliated newspaper Izvestia published a similar video. One of the men says that he believed Western "propaganda" about the "bad Russians" and that's why he went to war. "The Western media doesn't tell us how incompetent and corrupt the Ukrainian army is," he said. For this, uUnder what circumstances the videos and the statements made in them came about, there is no information.

It is unclear who captured the two men. This is possibly important for their further fate: troops of the pro-Russian separatists from the self-proclaimed people's republics of Donetsk and Luhansk are also fighting on Russia's side. They have already sentenced three foreigners from the ranks of the Ukrainian army – two Britons and one Moroccan –  to death in a show trial. In Russia, on the other hand, the death penalty is suspended.

The Russian Black Sea Fleet has apparently suffered a loss: According to the Ukrainian authorities, the tugboat Vasily Bech sank in the morning after rocket fire. There is no confirmation from Russian or independent sources.

The Ukrainian Navy reported the shelling on Thursday. According to the report, the ship, which had only been in service since 2017 and was equipped with a Tor-type air defense system, was hit by Harpoon missiles and badly damaged. Denmark supplied the anti-ship missiles to Ukraine.The tugboat is said to have been carrying military equipment on its way to the strategically important "Snake Island," which has been occupied by Russian troops since the end of February.

German Chancellor Olaf Scholz announced in an interview with the dpa news agency that the heavy weapons promised by Germany would arrive in time to support Ukraine in the fight for Donbass. The industry is working to ensure that the weapons can be delivered, said Scholz. However, it is essential that Ukrainian soldiers are trained on the modern systems. "You can't use the weapons without the training," said the Chancellor.

Two people were killed and 20 injured in a rocket attack on a residential area in the southern Ukrainian city of Mykolayiv, the region's governor Vitaly Kim said. According to regional governor Pavlo Kyrylenko, four more civilians were killed and six injured in Russian attacks in the Donetsk region.

According to Ukrainian President Volodymyr Zelenskyy, Russia has released a doctor celebrated in her homeland after three months in captivity . Julija Pajewska, known as Taira in Ukraine, is "already at home," Zelenskyj said in his latest video speech. Ukraine continues to work to free all people held by Russia.

In the Neue Osnabrücker Zeitung, the Vice-President of the European Parliament, Katarina Barley, warned against premature admission of Ukraine to the European Union. "There must be no hasty accessions," said the SPD politician. She warned that Ukraine must "completely fulfill" the EU accession criteria.

President Zelenskyy has again campaigned for Ukraine's EU membership . That would be "the greatest contribution to the future of Europe in many years, " he said.

Poland urges tougher sanctions on Russia. "It's about expanding the sanctions. From our point of view, a seventh package of sanctions must be launched as soon as possible," Lukasz Jasina, spokesman for the Polish Foreign Ministry, told Welt am Sonntag. Among other things, he proposes stopping technology exports and new measures against Russian banks and disinformation channels.