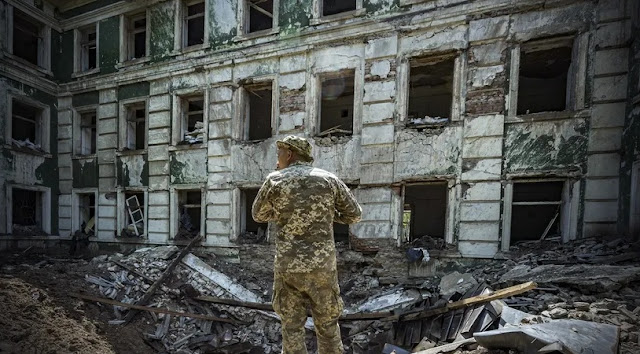 The Ukrainian President has visited positions in the embattled East. The military is said to have killed another senior Russian general.

Fighting continues in the heavily contested administrative center of the Luhansk region. According to the Ukrainian General Staff, Russian troops are attacking Sieverodonetsk with artillery and mortars. The storming of the industrial city is continuing, while neighboring villages and suburbs of the city are also being shot at.

In addition, Russia had attacked several places in the vicinity of Sloviansk in the adjacent Donetsk region, civilian infrastructure had been shelled. North of the occupied town of Popasna, Russian troops continued to encircle the Ukrainian units in the sector of the front.

When attacking several villages, however, they were not able to gain any land. After Ukraine reported over the weekend that it had recaptured parts of Sieverodonetsk , the governor of Luhansk yesterday warned of a Russian counterattack. He expects heavy artillery shelling in the coming days, Serhiy Gajdaj wrote on Telegram yesterday.

At a crucial stage in the fighting in Donbass, Ukrainian President Volodymyr Zelenskyy visited the region in the east of the country. According to the Presidential Office, Zelenskyy inspected command posts and positions on the front in the city of Lysychansk on Sunday, which is separated from the currently hard-fought city of Sieverodonetsk by the Siverskyi Donets River. Sieverodonetsk is the last major city in the Luhansk region that Russia has not yet conquered. The declared goal of the Russian armed forces is to take over the entire Donbass region, which also includes the adjacent Donetsk region.

The Presidential Office also said that Zelenskyy had also visited Bakhmut in the south-west of Donetsk and spoken to soldiers there. "I would like to thank you for your great work, for your service, for protecting us all, our state," Zelenskyy said in front of the soldiers, according to the presidential office. "I'm grateful to everyone," he added. "Take care of yourself." Selenskyj was last on the front line at the end of May. The Russian head of state Vladimir Putin, on the other hand, has not yet visited his troops in the Ukraine war.

According to their own statements, the Ukrainian military has killed another high-ranking Russian officer with the rank of general. The commander of the 1st Army Corps of the self-proclaimed Donetsk People's Republic, Major General Roman Kutuzov, had been "officially denazified and demilitarized," the Ukrainian Armed Forces' Strategic Communications Administration said overnight, according to the online portal Ukrajinska Pravda. A correspondent for Russian state television first reported on Kutuzov's death.

Kutuzov is said to have been killed while leading a Russian attack on a village near Popasna in the Luhansk Oblast in eastern Ukrainedirected. The Ukrainian side had previously reported that the Russian attack had been repelled and that the enemy had been forced to retreat with "significant casualties". Several Russian generals have been killed since the war began. Official Russian sources have confirmed the deaths of four generals.

According to British information, Russian troops have deployed anti-aircraft systems to Snake Island in the Black Sea. These are probably used to protect Russian ships operating nearby, the UK Ministry of Defense said, citing intelligence information. After the sinking of the Russian missile cruiser Moskva in April, the Russian Black Sea Fleet has become more vulnerable to missile attacks - and the UK and US recently announced deliveries of missile launchers to Ukraine. In addition, the reinforcement of the Russian positions on the island ensures that the sea route to Odessa remains blocked . This continues to make exports, including wheat, impossible.

In addition, Great Britain observes an advance of Russian troops towards the city of Sloviansk in the Donetsk region. Heavy fighting also continued in Sieverodonetsk in the neighboring Luhansk region. The Ministry of Defense thus confirmed earlier statements by the Ukrainian military.

The governor of the Donetsk region in eastern Ukraine has called on residents of the city of Druzhkivka to flee. According to him, at least one person was killed by a Russian attack during the night.

Russian Foreign Minister Sergey Lavrov will probably not be able to attend a meeting in Belgrade, Serbia. Bulgaria, North Macedonia and Montenegro have  denied the Russian government plane a flight through their airspaces.

Hackers apparently attacked the website of the Russian Ministry of Construction, Housing and Utilities. Since the alleged cyber attack, the words "Glory to Ukraine" in Ukrainian have been on the page.

Despite threats from Russian President Vladimir Putin, Britain has announced that it will support Ukraine with the delivery of M270 missile systems.