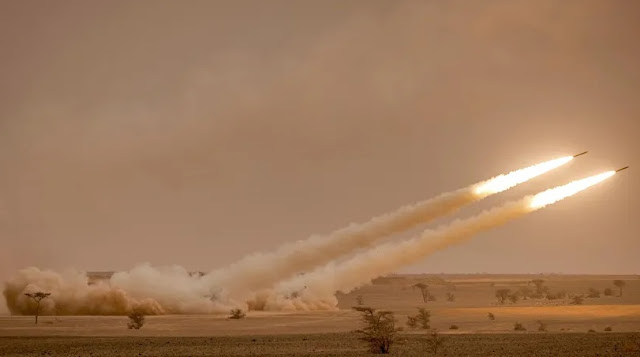 The Ukrainian exodus reaches 6.8 million refugees and exceeds the Syrian.

The war in Ukraine is approaching 100 days. Ukrainian authorities have acknowledged that Russia already controls "most" of the city of Severodonetsk . This is a key point in the battle for Donbas, which Moscow has presented for weeks as its main objective in the war in Ukraine.

The US has announced tonight that it will send Ukraine new state-of-the-art missiles, although with a limited range to prevent them from being used for attacks on Russian territory. The Kremlin has warned that this decision could increase the risk of a direct confrontation.

Germany will supply Ukraine with the IRIS-T medium-range surface-to-air defense system, Chancellor Olaf Scholz has confirmed, following pleas from Kiev and German opposition parties to increase deliveries of heavy weapons to the country.

"We have been delivering continuously since the beginning of the war," Scholz said on Wednesday, counting the weapons sent to Ukraine since the war with Russia broke out: 100,000 hand grenades and more than 5,000 anti-tank mines. "The government has decided that we will hand over the most modern air defense system Germany has in the form of IRIS-T," Scholz told lawmakers in the Bundestag.

Ukraine has killed Russia's best sniper, several Russian Telegram channels have reported. "Eternal memory of the warrior, the hero has died," says one of the channels. Alexander Kislinsky was a sniper with the Russian GRU/GU 22nd Spetsnaz Brigade deployed in Ukraine.

Russia warned on Wednesday that the US decision to supply ammunition and advanced rocket systems to Ukraine is extremely negative and will increase the risk of a direct confrontation. Russian Deputy Foreign Minister Sergei Ryabkov has told the state news agency RIA Novosti that Moscow views US military aid to Ukraine as "extremely negative".

Ryabkov highlights US plans to supply Kiev with its High Mobility Artillery Rocket System (HIMARS), a multiple launch rocket system that Washington has announced it will supply to Ukraine as part of its latest military aid package.

The Ukrainian president, Volodimir Zelensky, has acknowledged that the situation in his country, especially in Donbas, is "very difficult" and that "between 60 and 100 soldiers are killed in action per day and another 500 people are injured".

In a statement to the US website Newsmax, which is also reported by Ukrainian agencies, the Ukrainian president reiterated that his country is the "defensive perimeter" against Russia and that "it is a physical barrier formed by our people." "We have to realize who the dark power is: it is Russia," Zelensky declares. "And Russia will not stop at Ukraine, for sure."

"And the other countries, the former republics of the USSR and the members of the EU, or some of them that are already members of NATO, are already under threat," says the Ukrainian president, who calls for comprehensive sanctions and warns that there are "gaps from some leaders who say that the Russian leader should be offered a way out."

In his last speech, delivered this morning, President Zelensky thanked the European countries for the agreement to "significantly limit imports of oil from Russia " and said that "the practical result is less than tens of billions of euros, which Russia will no longer be able to use it to finance terrorism.

Russia and Saudi Arabia strengthen their cooperation in the OPEC+ format

The foreign ministers of Russia, Sergey Lavrov, and Saudi Arabia, Faisal bin Farhan, highly valued the level of cooperation between their countries in the OPEC+ format, Russian diplomacy reported today in a statement.

In the meeting they held this Tuesday in Riyadh, Lavrov and his Saudi counterpart highlighted the "stabilizing effect that the close coordination between Russia and Saudi Arabia in this important strategic area has on the world hydrocarbon market," the press release underlines.

Both parties, in addition to expressing their satisfaction with the development of Russian-Saudi relations, "have discussed in detail the priority tasks to increase economic-commercial cooperation and expand cultural and humanitarian ties," adds Foreign Affairs.

According to the statement, Moscow and Riyadh have agreed to "continue joint work on promising projects in the field of high technologies, including atomic energy."