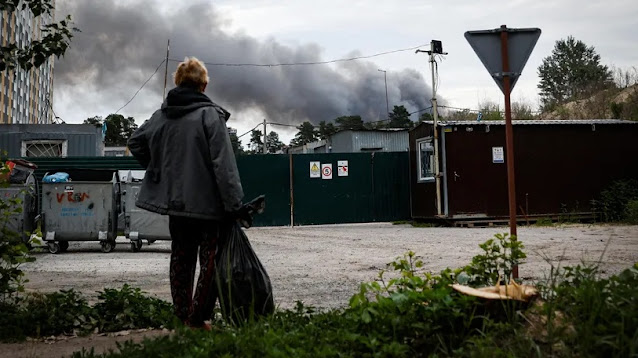 Smoke could be seen over the Ukrainian capital after explosions in the morning. Fighting continues in Sieverodonetsk.

In the early morning, violent explosions occurred in the Ukrainian capital of Kiev. An eyewitness told Reuters that smoke could also be seen in the city after the explosions. Earlier, air raid sirens could be heard across much of Ukraine, including in the Kiev region. The mayor of Kyiv, Vitali Klitschko, reports several explosions in the Danrnyzki and Dniprowski districts on Telegram. The emergency services are already at work.

In the east of the country, fighting continues unabated. Ukraine said it had recaptured part of the embattled city of Sieverodonetsk in a counteroffensive. Russia, on the other hand, announced that Russian troops were making progress in the city. The reports could not be independently verified. Sieverodonetsk Mayor Oleksandr Stryuk said on state television that street fighting continued throughout the day yesterday. There is a shortage of food, fuel and medicine.

For the first time, Ukraine officially informed about the  death of a German volunteer fighter  in the fighting. The International Legion for the Defense of Ukraine announced in Kiev that three volunteers from France, Australia and the Netherlands were among the "fallen brothers in arms". The Foreign Office in Berlin said the embassy in Kyiv was trying to find out more and was "in contact with the Ukrainian authorities who have spread the relevant news."

Ukrainian diplomats and politicians have sharply criticized French President Emmanuel Macron's warning not to humiliate Russia. "Because Russia is humiliating itself," Ukrainian Foreign Minister Dmytro Kuleba wrote on Twitter. "We'd all better focus on how to put Russia in its place." Ukrainian President Volodymyr Zelenskyy said in his evening video address that there was one person in Moscow who could stop the consequences of the war with a short order. "But the fact that this order still does not exist is obviously a humiliation for the whole world."

During the Russian rocket attacks on the Kiev region, a rocket flew dangerously close to the southern Ukrainian nuclear power plant. This was announced by the Ukrainian nuclear energy company. Russia continues to create the danger of a nuclear catastrophe.

The Russian attackers "still don't understand that even a small piece of missile that can hit a working power unit can lead to a nuclear catastrophe and radiation leakage," the agency said, accusing Russia of "nuclear terrorism. "The information cannot be independently verified.

According to the governor of Luhansk, the massive attack by Russian troops on the eastern Ukrainian city of Sieverodonetsk is continuing. Russian units controlled the eastern part of the city in the Luhansk region, says Governor Serhiy Gaidai. Parts of the Asot chemical factory were damaged in yesterday's attacks. Gaidai said the city was again half under the control of Ukrainian troops.

"It was a difficult situation. The Russians controlled 70 percent of the city, but over the past two days they have been pushed back," the governor said on Ukrainian television. "The city is more or less split in half now." The information cannot be independently verified.

After his talks with Russian President Vladimir Putin about global supply shortages due to the Ukraine war, the President of the African Union, Senegal's head of state Macky Sall, also wants to hold talks in Kiev.

The deputy chairman of the Union faction in the Bundestag, Jens Spahn (CDU), has criticized the communication of the Federal Minister of Economics Robert Habeck (Greens) when procuring new gas supplies.

Ukrainian President Volodymyr Zelenskyy has accused Russia of destroying cultural monuments, churches and other religious sites. He therefore called for the exclusion from UNESCO.

According to the Russian region of Bryansk, a village on the border with Ukraine has again been shelled from the neighboring country.

This will be important today:

While their home country is suffering from the Russian war of aggression, the Ukrainian national team is only one win away from qualifying for the World Cup in Qatar at the end of the year. To do this, the team around the former Dortmund Bundesliga professional Andriy Jarmolenko must defeat in Cardiff in English Wales in the evening.