A Conspiracy That Ended In Violence 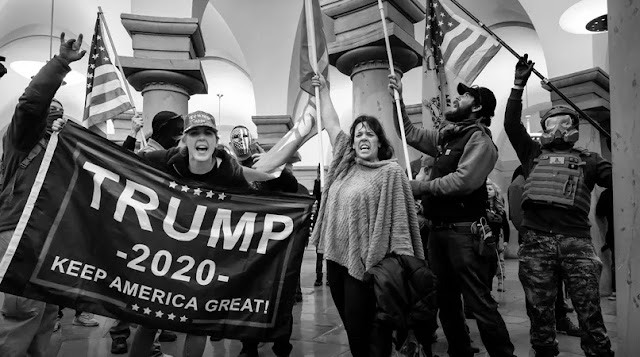 The investigative committee into the storming of the Capitol has made its findings public. They are shocking - and point to a clear responsible person.

The sun sets a suitably dramatic red over Washington, DC as nine members take their seats in a congressional chamber. Traditionally, congressional hearings are held earlier in the morning, but this is no ordinary session -- it's one meant to draw the attention of the entire nation.

For the first time in almost a year, the committee of inquiry into the violent storming of the Capitol met in public to present the results of its work to date. "The whole world is looking at us," said the panel's chairman, Democrat Bennie Thompson, in his opening statement.

Above all, however, America looks at itself. In the hours that follow, almost all television stations in the country show live how the committee presents previously unknown material, listens to witnesses and once again demonstrates the hatred with which the supporters of the then president acted. At the same time, the committee makes it clear that responsibility for what happened on January 6, 2021 in Washington, DC primarily lies with one person. Donald Trump "rathered the mob and lit the flame of this attack," said committee vice chair Liz Cheney. If this were not a parliamentary committee but a court, she would be the prosecutor - and the former president the accused.

Scenes from the previous hearings, which took place behind closed doors and in much more sober meeting rooms, are shown on a large screen above the heads of the deputies. It features former Trump associates describing how they became estranged from him shortly after the 2020 presidential election. Former Attorney General Bill Barr, for example, is particularly clear: the story about the rigged election was "bullshit," and he said so to Trump. Shortly thereafter, an excerpt from the interview with Trump's daughter Ivanka caused a stir, and she stated that she respected Barr and therefore "accepted" his position.

This is new to the public. In the weeks following the election, as Trump continued to lie and tried by all means to prevent the result from being certified, his daughter always stood behind him. Barr, on the other hand, resigned, but Trump had enough other supporters around him to spread his claim that the election was stolen from him freely. His chief of staff, Mark Meadows, for example, who has a special role to play in the whole thing.

The events of those weeks immediately following the election are important because they gradually led to what happened on January 6th. The committee traces how Trump deliberately instigated a conspiracy that ultimately turned into physical violence: he misled the public about his election loss, pressured state officials to retrospectively change the result in his favor, and finally called on his fans to storm the Capitol. The committee also has the corresponding tweet thrown on the wall. The statements from Trump's environment, in turn, provide the necessary points of connection - Barr's statement, for example, proves that he informed Trump very early on and in an official capacity that the election had not been rigged.

That is the first strategic element of this presentation: to prove that Trump was acting knowingly and intentionally. The second is to painfully repeat what actually happened that day. Following Thompson and Cheney's opening remarks, a short documentary of sorts will be screened covering the events of January 6, 2021, including previously unreleased footage. They show the brute force used by Trump supporters beating police officers, while the audio track of an interview with Trump, who raves about his supporters' peacefulness, is superimposed. They convey the fear that vibrates in the policewomen's calls for reinforcements. And they show the shouts in front of the Capitol: "Hang Mike Pence!"

What the committee reveals from its surveys: The president also echoed this demand. "Maybe they have the right idea there," Trump is said to have said. Pence "deserves it". From the previous work of the committee, the anger of Trump and those around him increasingly focused on the then Vice President from January 6, because Pence refused to recognize the election result. The Vice President, who was in the Capitol that day, also tried to stop the mob. Trump apparently wanted to encourage his supporters all the more. Meadows is said to have told the then commander-in-chief of the armed forces that the narrative that the vice president made the decisions here had to be "killed".

So while the violence at the Capitol was already in full swing, Trump not only refused to end it for hours. He also tried to make political capital out of it. This is grotesquely disproportionate to what police officer Caroline Edwards, who was called as a witness that evening, says. When the committee chair asks her what she remembers most about January 6, she tries to describe what that event was like for her and her colleagues beyond the familiar TV images: "I slipped in other people's blood," she says. It was like a theater of war: "Nobody in the police force is trained for something like that."

A war that Donald Trump launched against democracy. It's the power of many small images that form a big picture: that of a president who would do anything to stay in power - even dead people. Basically, that was already known. But this type of presentation – the primetime airtime, the film edits, the dramaturgical structure of the evening – serves a very specific purpose. It's not just about shaking up the US population or reaching a segment of Trump voters who may still be within reach. It is also about proving Trump's intentional initiation of a violent uprising as concretely as possible in order to use the collected material to build an indictment against him. Morally, politically and probably also legally.

The committee of inquiry is responsible for clarification, but not for its consequences. The judiciary must take care of them and the committee seems to want to send at least one message to them: "What President Trump asked of Mike Pence" - namely not to recognize the election result - "was not only wrong, it was illegal and unconstitutional", says Cheney. This should once again clarify the central finding of the committee's work from the past year: Trump's behavior after the election, his lies about allegedly stolen votes culminated in January 2021 in events that justify criminal prosecution of the former president.

The Minister of Justice could take action

Attorney General Merrick Garland, the country's top criminal prosecutor, faces the dilemma that impeachment against Trump, while warranted, would look like political revenge by the Democrats, who are likely to lose the Senate majority in November's congressional elections. The investigative committee supports him with his findings, but this is not yet an official recommendation to investigate Trump. In the coming week, the public sessions will continue and more details will be published. Perhaps that will build enough momentum for Garland to take action.

That shouldn't change anything about the Republicans' denial of reality. The show character of the session only ensures that they can now accuse the Democrats of only wanting to distract attention before the elections from the fact that everything is going wrong under their government. Cheney is one of only two Republican congressmen on the commission of inquiry; the vast majority want nothing to do with his work. Also because they know that  large parts of their electorate still believe in the lie about the fake 2020 election. It is secondary that even Trump's immediate environment now testified audibly for the whole world to consider that nonsense.

At the end of her opening statement, Cheney addresses her party colleagues directly. "The day will come when Donald Trump will be gone," she says. "But your dishonor will remain." Trump is still here for the time being - and with him the danger to America's democracy. This session will not change that.