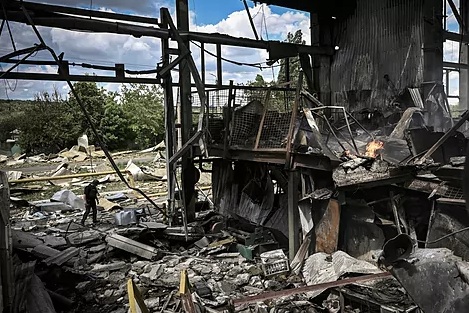 Ukraine promises to do everything to defend Donbas against the intensification of the Russian offensive after the fall of Lyman and the siege of Severodonetsk.

Less than a week after 100 days of war in Ukraine, the situation in Donbas is "very difficult". This has been admitted by the Ukrainian president, Volodymyr Zelensky, once the self-proclaimed pro-Russian separatist "republic" of Donetsk had "taken full control" of the key town of Lyman, with the "support" of the Russian army, and tightened the siege around Severodonetsk , key points in the plans for the final assault on the Sloviansk-Kramatorsk fortified district.

Russia wants to force Ukraine into a major battle for control of Donbas, something Kiev wants to avoid at all costs. Ukrainian forces are considering a strategic withdrawal from cities in the Lugansk region that have not yet fallen under Russian control. Zelenski has assured that "if the occupiers think that Lyman and Severodonetsk will be theirs, they are wrong. The Donbas will be Ukrainian".

Ukraine claims it has repelled Russia's offensive in Severodonetsk:

"They have fallen back to their previous positions"

Ukraine has managed to repel the Russian forces offensive on the city of Severodonetsk, in the east of the country, forcing them to withdraw, the military governor of the Lugansk region, Serhiy Haidai said on Saturday. "The Russians have fallen back to their previous positions," Haidai reported on Telegram, adding that they have suffered "significant losses", although they managed to gain control of a hotel on the outskirts of the city.

According to the governor, Russian troops have withdrawn in the area around Severodonetsk - the second largest urban center in Lugansk- and in the neighboring towns of Toshkivka and Oskolonivka. However, he points out, "the enemy does not stop trying to attack the rear of our troops and hamper logistics in the Luhansk region."

Deminers race against the clock to clear Lake Horenka, outside Kiev of unexploded bombs and missiles before the start of the summer season to avoid possible casualties.

A wooden pontoon allows them to jump into the blue waters of the bucolic lake, which in calmer times attracted hordes of fishermen and hikers. Now, two ships skim the surface while a diver and an amphibious drone explore its depths.

Between Thursday and Friday, the team found 10 heavy shells, remnants of intense fighting in this area that was the front line at the beginning of the war launched by Russia on February 24. None exploded because they had a "soft landing" in the water, Serhii Reva, head of the pyrotechnic unit of the State Rescue Service of Ukraine told AFP.

President Vladimir Putin has described the Zircon as part of a new generation of unrivaled weapon systems. Hypersonic weapons can travel at nine times the speed of sound, and Russia has conducted previous test launches of the Zircon from warships and submarines in the past year.

The European Union (EU) is seeking a deal this weekend to ban Russian oil deliveries by sea but not by pipeline to win over Hungary. President Zelensky has accused the EU of dithering. The EU summit to be held on Monday and Tuesday could cause divisions between members who want to take a hard line against Russia and those who call for a ceasefire, Reuters reports.

Zelensky plans to address next Monday by videoconference the EU leaders meeting in Brussels to discuss a new draft embargo on Russian oil, currently blocked by Hungary, AFP reports. Russian Finance Minister Anton Siluanov said in a television interview on Friday that Russia should get an additional 1 trillion rubles ($14.66 billion) for its hydrocarbon exports thanks to high prices.

A part of that amount will go to the continuation of the offensive in Ukraine, he said. Meanwhile, the rating agency S&P announced on Friday that it lowered the Ukrainian foreign currency debt rating to CCC+/C "due to the growing repercussions of the Russian military attack."

Putin denies any responsibility in a global food crisis

Although Ukraine, an agricultural power, cannot export its cereals due to the blockade of its ports, Putin on Friday rejected Russian responsibility in the world food crisis, in a telephone conversation with Austrian Chancellor Karl Nehammer, according to a Kremlin statement.

Putin on Thursday proposed helping "overcome the food crisis" on condition that sanctions against Moscow are lifted first, prompting allegations of blackmail. Given this, Germany built a "rail bridge" with Ukraine to transport Ukrainian wheat to Western Europe, according to the future head of US forces in Europe, General Chris Cavoli.

90% of buildings in Severodonetsk are damaged by shelling

90% of the buildings in Severodonetsk were damaged and 14 skyscrapers were destroyed in the latest Russian bombing, according to the governor of the Lugansk province in Donbas, Reuters reports. Serhiy Haidai has said that Russian troops had entered Severodonetsk, the largest city in Donbas still held by Ukraine, after trying to trap Ukrainian forces there for days, though he added that Russian forces would not be able to capture the Lugansk region." as analysts have predicted.

Russian separatist proxies said on Friday they controlled the town of Lyman, a railway hub west of Severodonetsk. Ukraine said Russia had captured most of Lyman but its forces were blocking a push toward Sloviansk to the southwest.

The governor of the Lugansk province in Donbas, Serhiy Haidai, estimates, according to Reuters, that there are some 10,000 Russian soldiers in the region that has been key in the Ukraine conflict since 2014 and where Putin's army has intensified its offensive with which he has achieved the fall of Lyman and the siege on Severodonetsk.

More than 4,000 civilians killed in Ukraine by the war

At least 4,031 civilians have died in the war in Ukraine and another 4,735 were wounded, statistics updated daily by the United Nations Office for Human Rights indicated on Friday. Among the confirmed deceased there are at least 995 women and 261 children, and among the injured are 406 minors, according to the United Nations count.