Victory Day Parade: Putin Justifies His Attack On Ukraine Because The West "Prepared The Invasion Of Our Land" 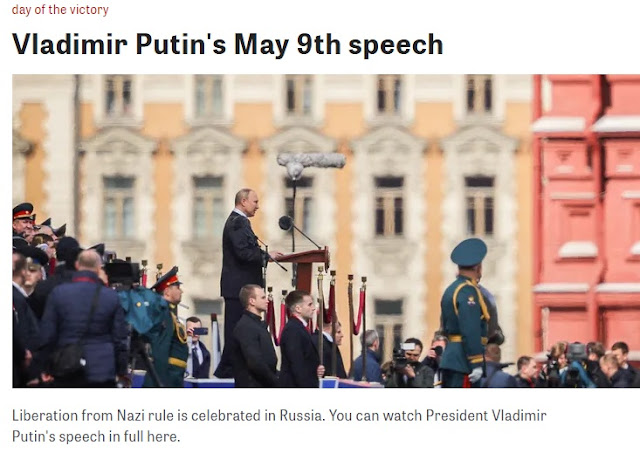 Speaking at the annual Victory Day parade, the Russian president justified his "special military operation" because "it was the only thing that could be done"

Russian President Vladimir Putin said in Moscow today that Russia's military intervention in Ukraine was necessary because the West was "preparing for the invasion of our land, including Crimea."

Speaking at the annual Victory Day parade, Putin first addressed the soldiers: " You are fighting for our people in Donbas and for the security of Russia."

"It is our duty to do everything possible to avoid the horror of war," Putin said in a brief but rather combative speech. He recalled that in September he proposed to sign a global security treaty with the West, but "to no avail." "They tried to create a threat to us by deploying troops. It was getting more and more dangerous, we had to do this [attack Ukraine] and it was the only thing that could be done." "They wanted us to pretend that we didn't know anything, that we swallowed it, but we are another type of country," warned Putin, who also denounced that the "enemies" tried to use terrorists against Russia.

From his lectern in Red Square, he addressed the forces that Russia has deployed in Donbas and the separatist militias that Moscow has been covertly supporting since 2014: "You are fighting for your land, and because the lessons of the Second World War". Russia's annual May 9 celebrations, also known as Victory Day, mark the Soviet Union's triumph over Nazi Germany in 1945 but have increasingly been used by Putin as a means of promoting patriotic unity and showing the country's military might.

TRAGEDY AND MISTRUST, HEROISM AND PARANOIA

Before his speech, in front of Putin passed the Russian flag and the victory flag, red and with the hammer and sickle that characterized the USSR. It is the flag that Red Army soldiers raised on the Reichstag building in Berlin on May 1, 1945, one day after Adolf Hitler's suicide. Although the USSR no longer exists, the ensign remains the official symbol of the victory of the Soviet people against Nazi Germany.

This year's ceremony once again recreated a state of mind that mixes the two most difficult realities that the USSR went through from a security point of view: the German invasion and the Cold War with the West: Tragedy and mistrust, heroism and paranoia. Some 27 million Soviet citizens died in four years of conflict. "There is no family in Russia that has not felt the pain of the Great Patriotic War," Putin recalled.

The Russian president's speech had raised expectations about the possibility that he would declare victory or declare a total war, or at least a general mobilization. Proclaiming mobilization would make this war very unpopular but it would give new resources to the new front line. In the end, the only decision Putin announced was reparative: "The death of every soldier and officer is painful for us," he said, "the state will do everything possible to take care of these families, the decree is signed."

Victory Day events have been held in the absence of foreign leaders. According to the Kremlin, no foreign leaders were invited to the Victory Day parade this year because it was not an anniversary in round numbers, unlike 2005 or 2010. However, Putin was accompanied at the Red Square parade. in 2017 by the President of Moldova, Igor Dodon, and by the Head of State of Kazakhstan, Nursultan Nazarbayev, the year before.

A PARADE WITHOUT PLANES OR REFERENCES TO "UKRAINE"

Russian Defense Minister Sergei Shoigu reviewed the parade, which was commanded by the head of the Ground Forces, General Oleg Salyukov. Aviation did not participate due to bad weather. Putin has repeatedly compared the war to the challenge the Soviet Union faced when Hitler invaded the USSR in 1941. "Russia has preemptively pushed back the aggressor. It was a forced decision of a strong, sovereign and independent country," he said of the attack. February in an 11 - minute speech in which he talked nonstop about what he has done in Ukraine without mentioning the name of the neighboring country. The attitude of erasing the Ukrainian nation from the public debate in Russia already goes from school textbooks to the lips of the president.

"In Kiev they announced the possible acquisition of nuclear weapons, the NATO bloc had begun to actively take military control of the territories adjacent to ours. An absolutely unacceptable threat was systematically created for us, and also directly on our borders," he denounced. Putin. "Everything indicated that a clash with the neo-Nazis, the little flagmen [Ukrainian Nazi sympathizers], backed by the United States and its junior partners, was inevitable," he added.

Important announcements were missing, but Putin tried to maintain the tension with a vibrant tone. On the sky the expected planes were not seen forming a zeta. The Kremlin explained that the air part had been canceled due to cloud cover in the Russian capital.

This year they paradedfewer soldiers and vehicles compared to last year. Some experts have linked it to the significant losses Russia has suffered in neighboring Ukraine. Fewer tanks have passed (130 compared to 191 in 2021) and there have also been fewer troops parading: 10,000 compared to 12,000 in 2021. The legendary T-34 tank has once again opened the parade while Russian television remembered the killed in the "horrible invasion", clarifying that he was referring to the one in 1941.