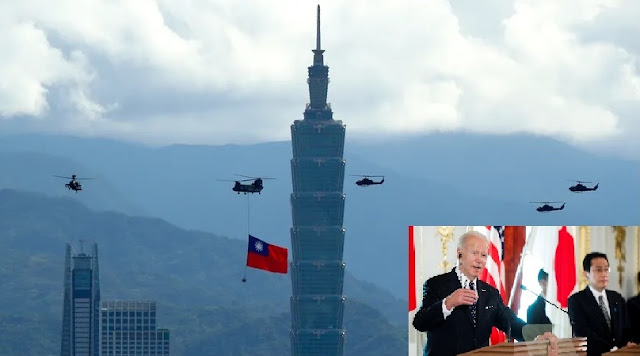 In 2018, then-President Donald Trump imposed punitive tariffs on Chinese imports. The US government now wants to abolish this again – because of the high inflation.

In view of the high rate of inflation, the US government is considering abolishing some of the punitive tariffs on imports from China introduced by then-President Donald Trump. "I'm considering it," President Joe Biden said during his visit to Tokyo. "We didn't impose any of these tariffs, they were imposed by the last government," he added, adding that he will discuss the matter with Treasury Secretary Janet Yellen when he returns from Asia.

The USA is currently suffering from high inflation, which was 8.3 percent most recently. The US Federal Reserve therefore recently took the largest interest rate hike in 22 years – an increase of half a percentage point to the new interest rate range of 0.75 to 1.00 percent.

According to Treasury Secretary Yellen, the government in Washington is considering further steps. At the end of April, she said the government was doing everything in its power to bring inflation down, including a "careful" review of trade strategy with China. It is appropriate to review the tariffs because this would have "some desirable effects" with regard to inflation.

In 2018, Donald Trump imposed the first punitive tariffs on Chinese imports, starting a trade war between the world's two largest economies. He cited the high US trade deficit with China and unfair trading methods by the government in Beijing as justification. A year later, almost all imports from China were subject to punitive tariffs. Goods worth more than 500 billion US dollars at the time were affected. The Chinese government also responded with new taxes on US imports.

US pledges military aid to Taiwan in case of Chinese attack

The US would support the one-China policy, but not the idea of ​​​​implementing it by force, Biden said. "It's just not appropriate." China "plays with danger," he said, but added that he doesn't expect China to actually try to attack Taiwan.

So far no official statement of support

Taiwan seceded from China in 1949 after the communists triumphed in the civil war. The communist leadership in Beijing regards Taiwan as part of the People's Republic and threatens to conquer it.

The United States feels obliged to Taiwan's defense capability - without having signed a formal declaration of military assistance with the country, as in the case of Japan or South Korea. So far, the support has mainly been in the form of arms deliveries. The question of military assistance in the event of an attack was deliberately left open for a long time. At the end of last year, Biden then said that the United States had an "obligation" to assist Taiwan in the event of an attack.

"Would destabilize the whole region"

When asked by a journalist, Biden said: "This is a commitment that we have made." Taking Taiwan by force would destabilize the whole region and be similar to what happened in Ukraine, the US president said, referring to Russia's war of aggression. "We remain committed to supporting cross-strait peace and stability and ensuring that there is no unilateral change in the status quo."

China clearly criticized Biden's statements. "You can't stand up to 1.4 billion Chinese," Chinese Foreign Ministry spokesman Wang Wenbin said. "The Taiwan question is a purely internal matter for China." In this case there is "no room for compromises or concessions". Citing national interests, he said, "No one should underestimate the Chinese people's firm determination, unshakable will and strong ability in defending national sovereignty and territorial integrity."