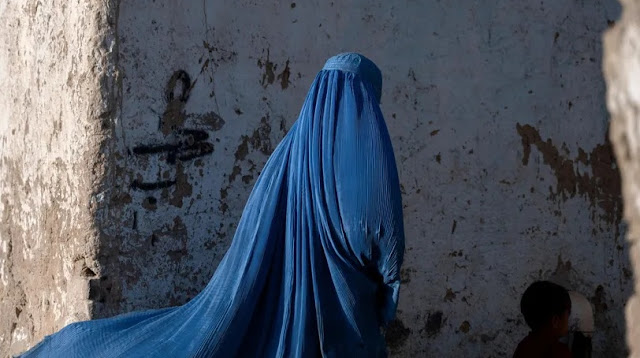 This is the most severe restriction on women's freedom since the Taliban seized power in August.

The Taliban government announcement this Saturday, of a decree to force them to dress modestly and regulate their clothing. The Taliban Supreme Leader, Hibatullah Akhundzada, has announced the rule, which makes it mandatory to cover one's face in public and provides 'warnings' and penalties for non-compliance.

The decree comes with the approval of the Ministry for the Promotion of Virtue and the Prevention of Vice, a body reintroduced by the authorities of the Islamic Emirate of Afghanistan after its return to power last summer, taking advantage of the disbandment of international troops.

In its introduction, the importance of the hijab - modesty - in Islamic law or Sharia is praised, it is ensured that the vast majority of Afghan women approve of it and garments that do not cover enough are criticized.

Consequently, below, the regulations specify some of the characteristics that the veil accepted by the new lords of Afghanistan must have: broadly speaking, it must be a black garment, it must not allow the figure of the female body to be guessed, and Also important, it should cover the woman's face. Such a description matches the characteristics of the burqa, the headscarf that became a symbol of the Taliban's crackdown on women in the 1990s.

"They should wear a chador [whose synonym is 'tent', because of the way they dress] because it is traditional and respectful," said the Taliban leader. "Those women who are neither too old nor too young must cover their face, except their eyes, by order of Shariah, in order to avoid provoking when meeting with men who are not mahram [guardian]," states one of the articles.

Each pious society has developed its own way of interpreting the hijab  In Muslim-majority countries like Turkey, which are secular in nature, it is not mandatory to cover your hair other than in some mosques, although it is expected to be so. On the contrary, in neighboring Iran it is compulsory, although the imposition is limited to covering the hair -and not wearing shorts, in the case of men-. Police officers act against those who contradict the norm and can fine the 'insufficient veil'.

In Afghanistan, under the previous republican government, there was no obligation to wear the veil, although it was common to wear it, with garment differences depending on the sociocultural niche. It was predominant in rural and urban areas, and was marked both by the presence of showy and colorful traditional clothes and by the importation of styles similar to those of the Iranians. All this has ended with the return to the color black, the preferred color of Islamic orthodoxy.

Likewise, the new decree provides for a concatenation of judicial responses in case of disobeying its rule: if a woman breaks the rule for the first time, the mahram will receive a home visit from the security forces to warn her of the situation. If it happens again, the mahram will be summoned at the Ministry for the Promotion of Virtue and the Prevention of Vice. A new repetition will lead to imprisonment, always of the mahram.

With these penalties against the male, the imposition of the figure of the guardian is also certified, without which the Afghan woman, by prior decree, can no longer travel between cities or, in many cases, go out on the street. In fact, the new decree reminds that if the woman does not have important work outside the home "it is better that she stays at home." A 180-degree turn from life in Afghanistan a year ago, when, despite the many difficulties, women were able to work and move freely.

Today, the priority for Afghans and Afghans is to have something to put in their mouths. The new phase of the war in Afghanistan, with regular attacks by the Islamic State, disproportionate poverty and a government subject to sanctions for its rigorous laws, is leading to despair for many. Migratory routes are full of obstacles. Many girls are doomed to a dark future as the Taliban continue to ban secondary schools from opening in many districts across the country.

Taliban chief Hibatullah Achundsada has made it compulsory for women in Afghanistan to wear a burqa in public. They should wear the full body covering "as it is traditional and respectful," Achundsada said in an edict. It is the strictest restriction on the lives of Afghan women since the Taliban took power again.

The burqa is a type of cloak with a close-meshed eye grid that completely covers the body. Contrary to Achundsada's announcement, however, it is not traditional Islamic clothing.

When the Taliban ruled Afghanistan from 1996 to 2001, they forced women to wear the burqa in public. After that, the rule was repealed. In the German debate about veils, the burqa and niqab are often confused. The niqab also covers the face, but a small viewing slit remains free.

After taking power last August, the Taliban promised a moderate government. In recent months, however, numerous women's freedoms have been curtailed. The secondary schools for girls were first opened and closed again after a few hours. Tens of thousands of women who worked for the government lost their jobs. Women are only allowed to leave the country when accompanied by a male relative.