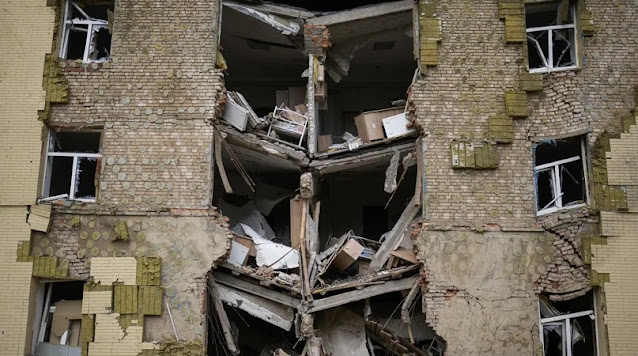 President Volodymyr Zelenskyy accuses Russia of "barbaric attacks". He calls for the country to be internationally classified as a terrorist state.

According to the authorities, several civilians were killed or wounded in attacks on Ukrainian locations. Ukrainian President Volodymyr Zelenskyy accused Russia of "new terror". These are "senseless, barbaric attacks" with rockets and mortars, he said in a video speech.

The Ukrainian army said it had repelled Russian attacks. 33 "occupiers" were killed and six armored vehicles destroyed. The information is not independently verifiable.

The city of Sievjerodonetsk in the Donbass was particularly hard fought. Russian troops are trying to gain a foothold there, Ukrainian military expert Oleh Zhdanov said, according to Unian agency. According to Luhansk Governor Serhiy Hajdaj, the city is still under the Ukrainian flag. He contradicted reports from Russia that Sievjerodonetsk was completely taken.

Meanwhile, in the port city of Mariupol, which was conquered by Russia, Mayor Vadym Boychenko warned of the risk of infectious diseases. The sewage system and garbage disposal no longer worked, and the temperatures rose. "Therefore, our doctors are reporting the danger that may arise this summer: outbreaks of infectious diseases such as dysentery and others," Boychenko said.

Zelenskyj calls for classification of Russia as a terrorist state

Zelenskyy continued: "I will always remind the world that Russia must finally be officially recognized as a terrorist state, as a sponsor of terrorism." This reflects the daily reality that Russia has created with its war of aggression against Ukraine "and wants to take it much further to Europe". "And that has to be enshrined in law."

At the beginning of the week he wanted to contact the participants of the EU special summit in Brussels and then talk about it. "About terrorism, which today has actually become the only form of action by the Russian state against Europe," Zelensky said. "Terror on the territory of Ukraine. Terror on the energy market in Europe, not only in our country. Terror on the food market, worldwide. And what terror will come next?" Only together could the Europeans stop the politics of such a state, he said.

In April, the Ukrainian parliament classified Russia as a terrorist state. "The Russian Federation is a state of terror, one of the goals of the political regime is the state genocide of the Ukrainian people, the physical annihilation, the mass murder of the citizens of Ukraine," says the law.

The events of the yesterday night at a glance:

According to a newspaper report, 352,545 Ukrainian nationals and 12,371 third-country nationals were registered in Germany with biometric data a few days before the basic security entitlement for Ukrainian refugees came into force. According to the Federal Employment Agency, as of Friday, 44,000 Ukrainians have registered with job centers as looking for work.

According to President Volodymyr Zelenskyy, Ukraine is approaching the point where it is technologically and attacking superior to Russia.  "Of course, a lot depends on our partners and their willingness to provide Ukraine with everything that is needed to protect freedom," Zelenskyy said in a video message.

Ukraine calls on the West to supply advanced long-range multiple rocket launchers. "If the West really wants Ukraine to win,  maybe it's time to give us MLRS? " asked Mykhailo Podoliak, an adviser to President Volodymyr Zelenskyy, on Twitter.

Volodymyr Zelenskyj suspects that the territory occupied by Russia in recent years cannot be completely taken back by force. "I don't think we can win back our entire territory by military means," he says in an interview.

Russian  President Vladimir Putin has signed a law that abolishes the previous  age limit of 40 for new recruits  in the Russian army. The Duma, Russia's parliament, approved the initiative on Wednesday.

According to the Ukrainian authorities, in cities in Ukraine occupied by Russia, the  connection to Russia is being promoted . Kremlin-installed officials have started  broadcasting Russian news programs ,  Russian school curricula  are being introduced and other steps are being taken to annex the territories, it said.

A Reuters news agency photographer reports  severe damage to a solar power plant  in the Kharkiv region. Apparently the plant had been hit by a rocket. The Ukrainian General Staff has reported  several Russian attacks on communities and infrastructure  in the region.

Ukraine again emphatically denied Russian claims that Western punitive measures against Moscow are the reason for the current lack of food security in the world. "Sanctions against Russia have nothing to do with the emerging global food crisis," Foreign Minister Dmytro Kuleba said on Twitter. "The only reason for shortages, rising prices and the threat of hunger is that the Russian military is physically blocking 22 million tons of Ukrainian food exports in our seaports," Kuleba stressed. The West must bring Russia to an end of the blockade.

A benefit show for Ukraine is to take place today at the Brandenburg Gate in Berlin. In addition to performances by musicians such as this year's winners of the Eurovision Song Contest, the Kalush Orchestra from Ukraine, video messages from President Volodymyr Zelenskyj and international heads of government are also  planned.