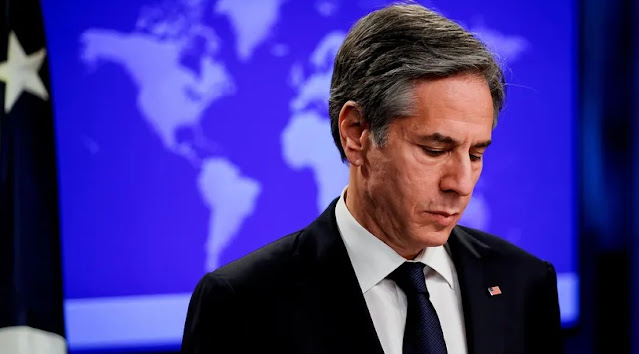 The US government has dared a lot to support Ukraine. The longer Russia's attack lasts, the more difficult it becomes to maintain this role.

When US Secretary of State Antony Blinken travels to Europe this weekend, he will invoke cohesion and unity, praise the strength of the West and pledge his support to Ukraine. Support means one thing above all: money.

The US wants to make almost 40 billion dollars available for the defense of Ukraine against Russia, for weapons, relief supplies and support for refugees. It is the largest aid package of its kind in decades, around five percent of the annual US defense budget. Neither in the Afghanistan nor in the Iraq war was there such expenditure within such a short time.

The related bill is still stuck in Congress. He will be able to say goodbye next week at the earliest instead of last Thursday as originally planned. A single man is responsible for this: Republican Senator Rand Paul from Kentucky. He only wants to agree if the spending of the money is better monitored. Paul explained that he had not sworn his oath to a foreign country, but to the United States : "We will not be able to save Ukraine by plunging the US economy into the abyss."

Paul's veto should only delay the release of the funds, not prevent them. Nevertheless, the delay is uncomfortable, especially for Blinken, who during his visit to Europe is meeting the foreign ministers of the other NATO countries and recently urged not to waste any time on the financial aid for Ukraine. But it is possibly the symptom of a larger development. Russia 's attack on Ukraine has now been going on for 11 weeks, and there are signs that it will continue for a long time. And while US voters' empathy for the Ukrainian population is still high, according to polls, it could wear out as time goes on and problems at home mount. This makes it all the easier for political opponents to question whether President Joe Biden's government 's commitment to Ukraine is correct.

40 billion for Ukrainians, but no baby food?

There is no shortage of crises in the USA. In addition to rising inflation, there are country-wide delivery problems with milk powder, which are causing many parents to despair. In addition, the election campaign for majorities in Congress has long been in full swing. Republicans and Democrats are largely in agreement that Ukraine must be resolutely supported - or that Russia's aggression be resolutely opposed. The House of Representatives did not bother to debate the $40 billion, but instead approved it, even though the White House had formally requested only $33 billion. The Senate is also in favour, with the one exception from Kentucky.

And yet: Rand Paul is not the only one standing for (re)election in November and taking the golden opportunity to question Biden's priorities. JD Vance, Donald Trump-backed Senate candidate in Ohio, won the candidacy by saying, among other things, that it "doesn't matter" what happens in Ukraine. Far-right MP Marjorie Taylor Greene, also a prominent Trump representative, has jumped on the same bandwagon: Why is there $40 billion for Ukrainians but no baby food at home? Taylor Greene and Vance do not represent the majority of Republican party officials, but their populism has resonated outside their constituencies.

Your involvement in Ukraine has left the US government vulnerable. But she can't go back either. Not only has it mobilized funds and resources on an historic scale, but it has also set the international tone against Russia – and dared to go far in terms of military and, in particular, strategic support for Ukraine. Information from US secret services is said to have been instrumental in allowing Ukrainian forces to sink the Russian warship Moskva.

This crossed a threshold where Biden had repeatedly hesitated before. The President has repeatedly made it clear that while support for Ukraine is morally imperative, it has its limits. A confrontation between Russia and NATO countries, Biden said around March, should be avoided at all costs. That also meant not provoking Vladimir Putin. If you talk to US officials today, they are very careful not only to talk about the war in Ukraine, but about Russia's attack; "Putin's price hike" has become a catchy slogan in Biden's speeches to the American public on the rising cost of living.

It is no longer just about rescuing Ukrainian civilians from the brutal acts of the Russian attackers, it is about the moral responsibility of the West. It is about the medium-term future in a world where Russia is first and foremost the aggressor. This war has long been America's war. This also explains why the USA invests so much politically and financially. They are pursuing a strategic goal: to weaken Russia. They want to prevent Putin from getting away with what he is doing to Ukraine.

"Throughout our history, we've learned that if dictators don't pay the price for their aggression, they always move on," Biden said recently. This increases the cost as well as the threat to America and the world all the more. The money that the US is currently taking in hand - calculated per day in the coming months it will be around 200 million dollars if the Senate then releases the funds - is a comparatively small price to pay if you want to avoid future conflicts, he said President next.

Of course, this strategy, no matter how unalterable it may be on the one hand, is not only associated with risks in domestic politics. A NATO-Russia conflict is what the US government tried so hard to avoid in the first few weeks of the war, partly out of fear of a nuclear escalation. And even if it quickly became clear during the course of the war that it was not possible to stay out of it, the concern that the USA would be too dominant and thus justify an attack by Putin is still great.

This also makes the whole thing communicatively difficult – the tone has to be unmistakable, but not too aggressive. The Secretary of State for Europe, Karen Donfried, formulated the US goal in a conversation with journalists on Friday: "Our focus is now on strengthening Ukraine on the battlefield so that it will have so much power at the negotiating table when the time comes as possible." A diplomatic solution is still considered the best, said Donfried. "But there is only one person who can end this war and that is Vladimir Putin."

However, this should only work with partner countries that jointly exert pressure. At their meeting this weekend, the NATO foreign ministers will also discuss how Russia can be permanently weakened without risking too much at the same time. At a summit in June, the alliance wants to decide on a new strategic concept. The goal of isolating Russia is likely to be enshrined in it for the coming years.

Washington is relatively calm about Turkish President Recep Tayyip Erdogan's threat on Friday to veto Finland's and Sweden's accession plans. Turkey's position still needs to be clarified, said Donfried, but also emphasized: "All NATO partners agree on condemning the Russian invasion of Ukraine." This can be interpreted in such a way that, in case of doubt, one could possibly be willing to make concessions to Turkey that one would refuse under other circumstances - it is now too important to keep the alliance closed against Russia.

The challenges remain inside. By May 19, Blinken recently said, Ukraine aid funds must be legislated to secure "interrupted military support" for Ukraine. It is quite possible that it will be tight and that Congress is still discussing the package that day - especially since the House of Representatives had already approved it, but changes to the draft will require a new vote there.

Again, this should be positive. But the longer the war lasts, the more likely it is that more packages will be needed when that money eventually runs out. However, the current pace and volume of Ukraine aid will hardly be sustainable for the government without coming under massive criticism for being a burden on US taxpayers. If the Republicans regain control of the Senate in November and Trump-loyalists like JD Vance set the tone there, the role of the United States in this war could change once again.